I’ll get straight to the point…

Do not buy shares of AMC Entertainment Holdings (NYSE: AMC).

And if you happen to own any shares of AMC, sell them now.

As I write this less than six months later, those same shares are around $60. 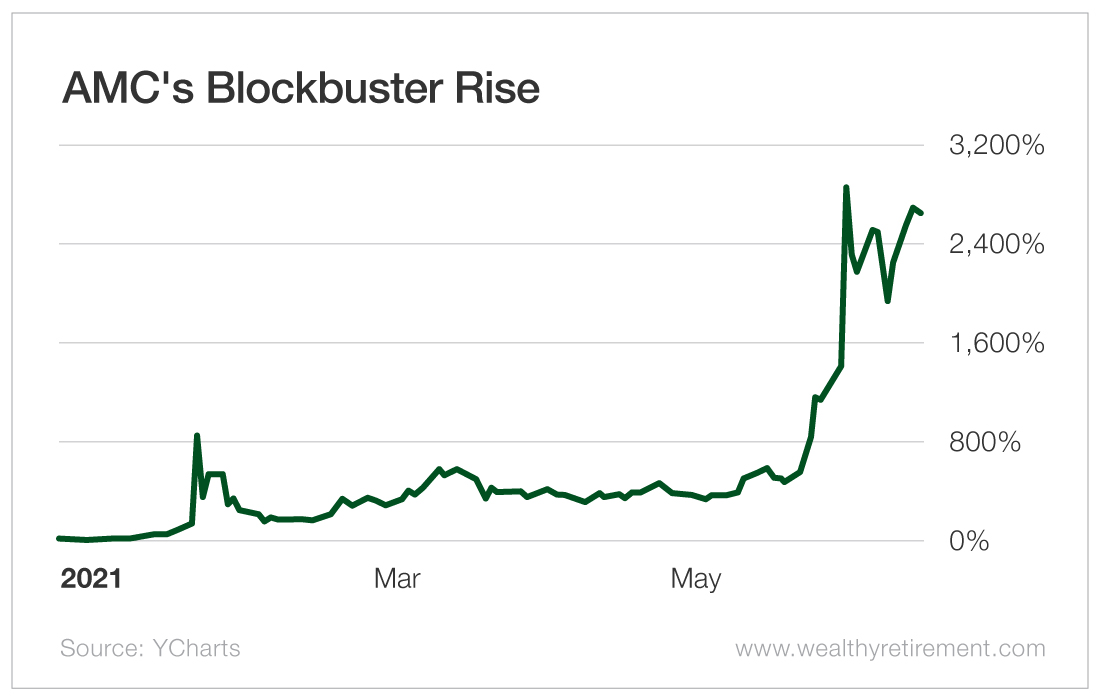 That makes AMC the best-performing stock in the market this year.

That is pretty crazy when you consider that this movie theater operator has been bleeding cash because of the pandemic.

The first quarter of 2021 was bad too, with AMC posting another loss – this time to the tune of $567 million.

Oh, and did I mention that AMC’s balance sheet is also overloaded with debt?

AMC’s business was struggling mightily before the pandemic even began.

Those are some of the most powerful companies in the world… not exactly the competition you want coming after you.

And yet, despite losing all this money and having far too much debt on its balance sheet, AMC shares are now at all-time highs.

The story gets even crazier… That skyrocketing share price alone doesn’t come close to telling the entire story of how insane this stock market move has been.

AMC has also been issuing a massive number of new shares.

Throughout the pandemic, the company has been issuing shares to try to offset the cash that the business has been bleeding.

As of today, AMC’s share count has now ballooned to more than 500 million.

With both a surging share price and a skyrocketing share count, AMC’s stock market valuation has changed as follows…

Now, after ringing up a massive $4.6 billion loss in 2020 and throwing more debt onto an already wobbly balance sheet, AMC is valued at $30 billion. 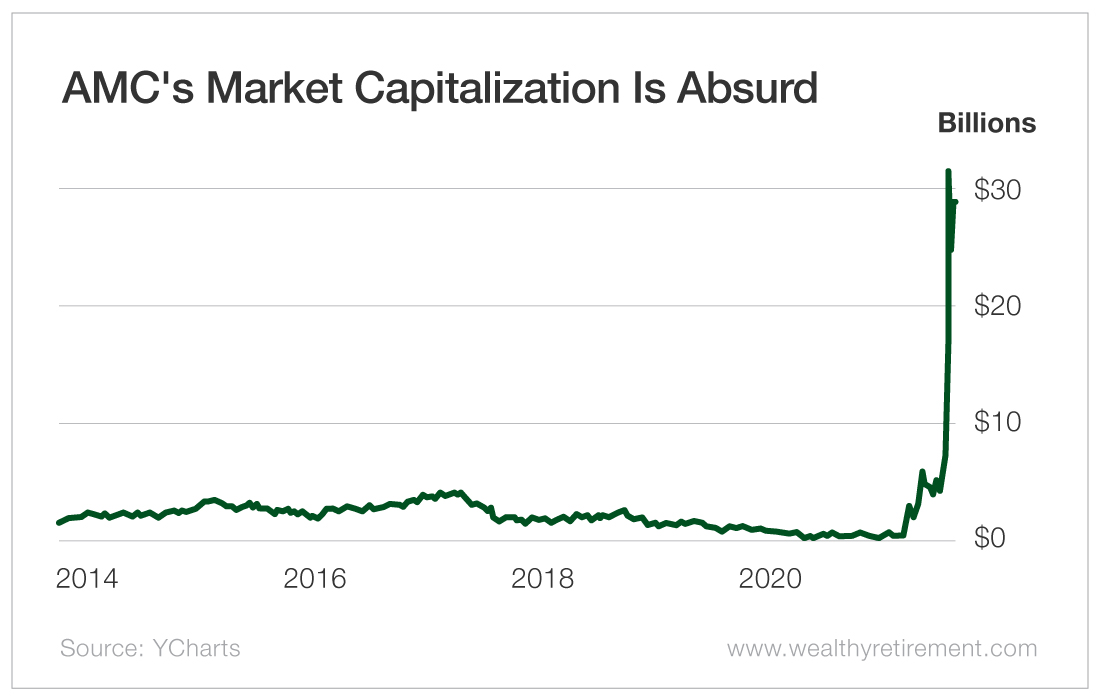 This valuation is utter madness.

At some point, it is going to collapse to just a fraction of where it currently is.

That is, if AMC’s debt load and powerful competition don’t send it all the way to zero…

The creators of this stock market madness are an army of young, inexperienced traders who use social media to pump up share prices.

There are thousands of these young folks using a Reddit forum called “WallStreetBets.”

This is where they tout various stocks, convincing as many people as possible to buy.

The main targets for these traders have been stocks that hedge funds have been aggressively betting against.

In other words, companies with terrible balance sheets and business prospects, like AMC…

While AMC’s share price has soared, AMC management and directors have been doing exactly what I would have done.

They have been selling the stock that they own hand over fist.

Insiders are cashing in as fast as they can.

In 2021 alone, AMC insiders have dumped more than half a billion dollars’ worth of stock.

Remember, insiders know what a company is worth better than anyone.

AMC insiders know that the share price of the company is at absurdly high levels and are acting accordingly.

These folks are the smart money – and they are selling, selling and selling some more.

The smart money is definitely not the inexperienced Reddit traders who are driving up the share price.

This will end badly.

The only question is when…