Cannabis Is Booming, So Why Are Stocks So Cheap?

I’m just going to say it…

But there’s a big catch.

This is true only if marijuana gets federally legalized in the next several years.

Personally, I don’t think legalization is an if question.

I think it’s more of a when.

My crystal ball on the timing of that “when” is murky, though.

That’s because the road to legalization ends with approval from Washington.

There are some things that I know for certain about cannabis/marijuana.

One is that the vast majority of Americans now support full legalization – 68% according to a recent Gallup poll. 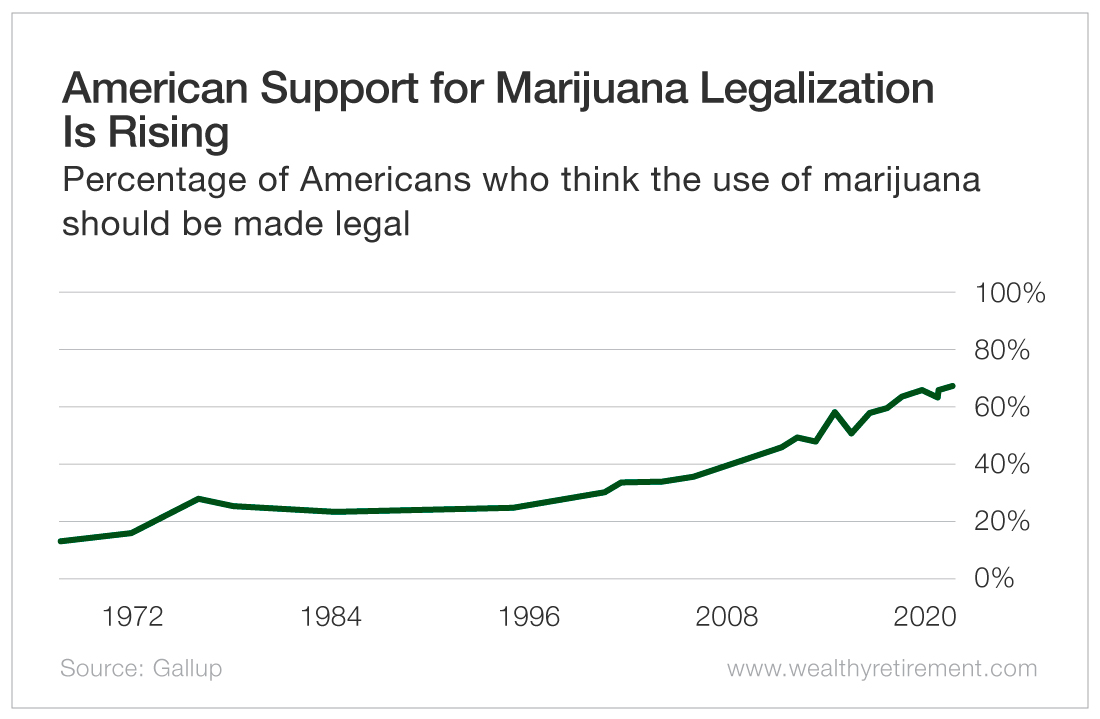 In my opinion, 68% support for anything is an incredible figure in this world.

The numbers surrounding support for marijuana legalization indicate that figure will only grow.

Gallup first measured how Americans felt about marijuana legalization in 1969.

Back then, just 12% of people supported it.

Fast-forward to today’s level of support, which Gallup has broken down by age group.

Here’s what it found:

Beliefs change with generations, and this demographic split suggests to me that support for legalization is only going to go higher.

Eventually, what the people want, the politicians should provide.

Sen. Chuck Schumer of New York has proposed legislation aimed at removing marijuana from the Controlled Substances Act at the federal level, regulating it and taxing sales.

That’s encouraging, but his proposal doesn’t have Republican support in the Senate and President Biden hasn’t even endorsed it.

If I’m correct that legalization will eventually happen, I’m also correct in saying that we still have no idea when.

While legalization meets drag in Washington, D.C., what’s happening at the state level is very different.

In those states, the MSOs legally selling marijuana are growing revenue and EBITDA (earnings before interest, taxes, depreciation and amortization) at an incredible pace.

When I say incredible, I mean it.

Some MSOs are organically growing revenue at rates of 30% to 50% year over year and will continue to grow extremely fast for years to come.

When you factor in the growth that the bigger operators are creating with accretive acquisitions, the year-over-year gains are even faster.

The MSO cannabis industry is by far one of the fastest-growing industries in North America.

But despite that growth, these companies trade at some of the lowest multiples of EBITDA in the market.

The chart below shows what an outlier these MSO stocks are. 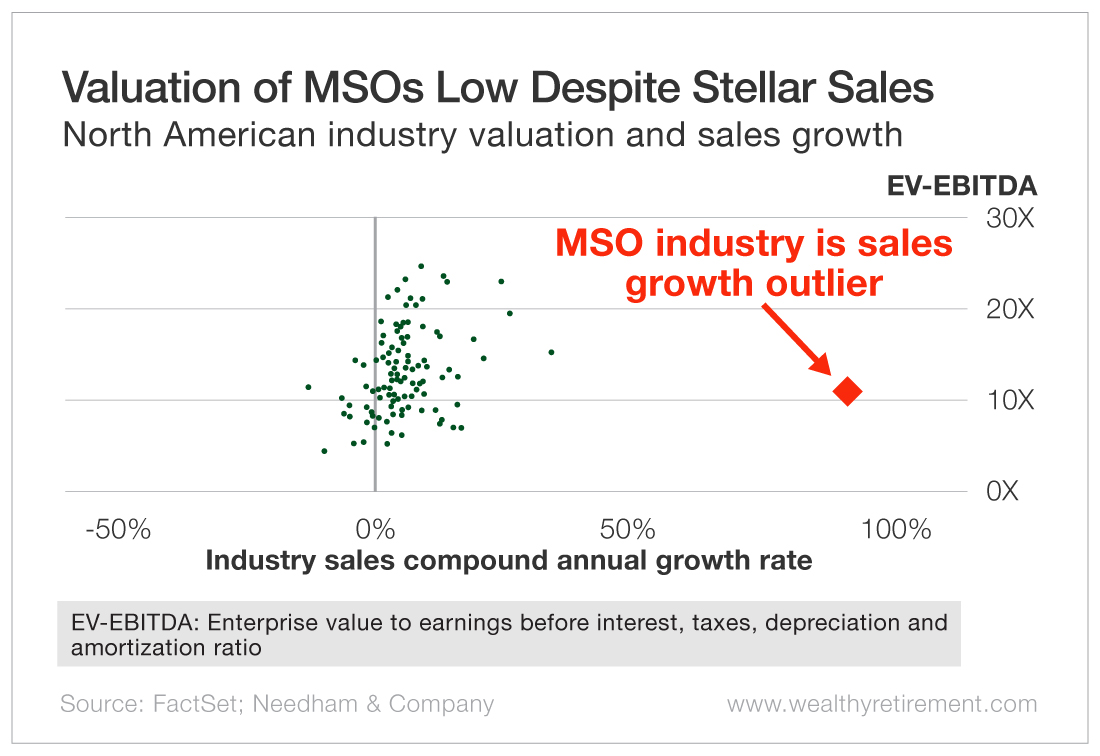 Normally, companies with fast, sustained growth trade at a huge premium relative to the market – not a discount.

These growth rates, combined with these EBITDA valuations, have me trembling with greed.

Considering the speed at which these companies are going to grow for the next five years, they really should be trading at three or four times their current share prices.

Because marijuana remains illegal at the federal level, these MSOs pay an absurd amount of income tax as subjects to the 280E rule.

That tax rule prohibits these companies from deducting their operating expenses from their taxable income.

So while these companies are insanely cheap on earnings before tax, they aren’t cheap based on earnings after tax.

When our politicians finally take action that aligns our federal marijuana laws with the will of the majority of Americans, the insane tax that these companies pay will go away.

Legalization will also allow the MSOs access to cheaper sources of financing and will bring more cannabis customers into stores.

All of which is going to send the share prices of these MSO operators through the roof.

Unfortunately, I don’t know if that will happen in six months or six years.

Our politicians are in control of the timing, which is the reason these stocks are trading for such tantalizing valuations.

Your Bear Market Survival Guide for 2022