The economy is in shambles. A White House economic advisor expects U.S. gross domestic product to fall by an unimaginable 20% to 30% in the second quarter this year. He also expects Great Depression levels of unemployment.

As a result, we’ve adjusted our ratings here at SafetyNet Pro headquarters to adopt a much more conservative stance.

For example, the threshold for a company’s payout ratio was lowered by 33% to ensure that the companies rated “A” or “B” are truly safe from a dividend cut.

Under normal circumstances, a company that historically paid out 75% of its free cash flow in dividends doesn’t worry me. Today, it does – particularly if it has a high debt load.

As a result of these stricter guidelines, a household name Dividend Aristocrat suffered a big downgrade.

AT&T (NYSE: T) has raised its dividend every year since it was its own company, having been broken up by the federal government and forced to spin off regional telephone companies (the “Baby Bells”).

A Dividend Aristocrat is a member of the S&P 500 Index that has grown its dividend every year for at least 25 years. AT&T qualifies, having hiked the dividend payout annually since 1985 for an impressive 36-year track record.

Here’s where it gets sticky…

Free cash flow is estimated to drop 14% this year. SafetyNet Pro does not like it when a company’s free cash flow falls.

But also contributing to the downgrade are the tighter payout ratios now used by SafetyNet Pro. 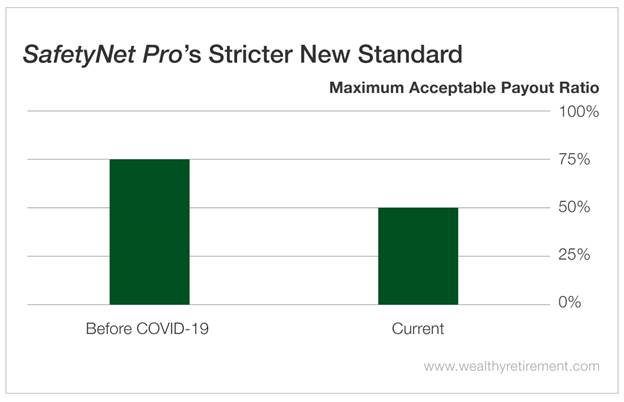 This year, the payout ratio is forecast to come in at 58%, also causing a demerit in the ratings scale.

Six months ago, those numbers wouldn’t have been a problem. But a lot has changed in six months. The world, including the business world, is a very different place.

And as I mentioned, I am erring on the side of being conservative, as I don’t want any readers to be caught off guard with a dividend cut or suspension.

Lastly, AT&T has $144 billion in debt. That’s too much compared with its earnings before interest, taxes, depreciation and amortization (EBITDA).

As a result, AT&T’s dividend safety rating is a “D.”

Now, do I expect AT&T to cut its dividend? No. It has a 36-year track record of dividend increases that I’m sure it will want to keep intact. Additionally, the payout ratio isn’t particularly high.

But in this new environment, it can’t be considered as safe as it was just a few months ago.

You can also type your favorite company’s name in the search box in the upper right-hand portion of the page to see if I’ve written about it recently.

P.S. Be sure to check out my new YouTube channel. It’s free to subscribe. Each week I share my thoughts on a different aspect of the market.

Is This Booming 8.58% Yield Sustainable?

A 13.9% Yielder Whose Dividend Just Jumped