Holiday Trends to Watch For

I’ve never said “It just makes sense” more than when Matthew first pointed out a few of his favorite seasonal trends – like investing in weight loss companies before New Year’s, beer companies before summer and retailers before the holidays.

He highlights some of his favorite holiday plays in today’s article.

Matthew launched a brand-new service this week, Alpha Trading Network. It’s unlike anything that Wealthy Retirement publisher The Oxford Club has ever released.

It’s an innovative chat room that gives subscribers access to Matthew from 9:30 to 10:30 a.m. ET – every day that the market is open.

During the beta test just a couple of weeks ago, Matthew closed out a nearly 400% gain on Meta Platforms (Nasdaq: META) in less than 24 hours.

Matthew is applying his seasonal trend strategy – along with a couple of other highly effective investing strategies – to Alpha Trading Network.

If the beta test was any indication of Alpha Trading Network and Matthew’s success, then I can’t wait to see what’s next!

We’re entering what is traditionally my favorite time of the year.

That’s not because I love fall or a cornucopia of pumpkin spice-flavored goodies. Or because I’m a fan of winter. (In fact, I hate all of those things.)

But the reason I love this time of the year is it’s the busiest season for trend traders like me. And it’s rewarded me and my subscribers time and time again with some of the largest gains of my career.

Put aside your fears of a bear market.

Put aside your fears that there’s a potential recession lurking over the horizon.

Instead, focus on what’s about to unfold over the next few weeks…

But looming over all of this is the holiday shopping season.

The official kickoff is only a couple of weeks away. And despite Amazon‘s (Nasdaq: AMZN) warning that it was going to see some of its worst growth ever, Christmas isn’t canceled. 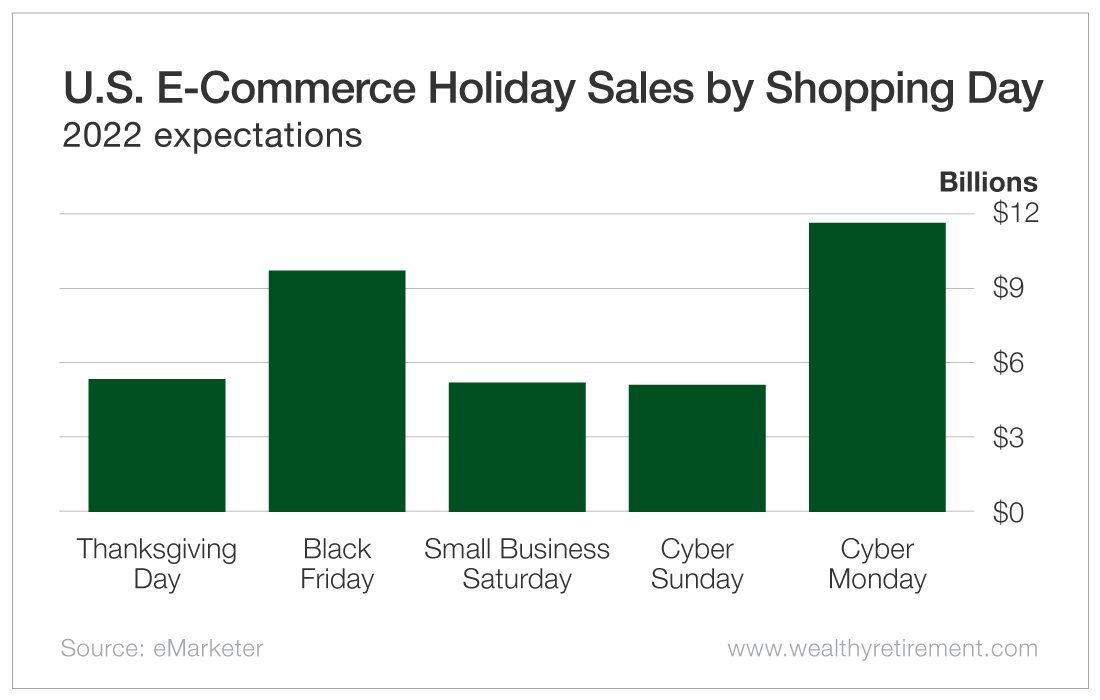 This year, e-commerce sales on Cyber Monday and Black Friday are expected to be around $12 billion and $10 billion, respectively.

Total U.S. holiday spending is forecast to top $1.3 trillion this year. That’s an increase over 2021’s. And that’s despite the fact that the world is full of fears.

The success of seasonal trading is built on optimizing time and effort.

I’ve always stressed that investors should hold shares of certain companies only during each company’s best periods of the year. That way, they get the most bang for their buck while reducing their overall exposure to black swan events or other risks.

The strategy I use isn’t random.

And the ideas behind it aren’t anomalies.

Data shows that many companies enjoy fantastic stretches during the same time year after year.

And more often than not, that relates back to the company’s underlying business, revenue and earnings.

When I was growing up, my dad told me, “Companies really only make money three to six months out of the year. The rest of the time, they’re just trying to break even.”

For many consumer-dependent companies, we’re heading into those months. In fact, the fourth quarter alone can account for as much as 40% of a retailer’s annual revenue.

The company sells men’s and women’s clothing as well as outdoor gear.

And if you look at Duluth’s fourth quarter revenue over the past several years, you’ll see a huge annual holiday upswing. 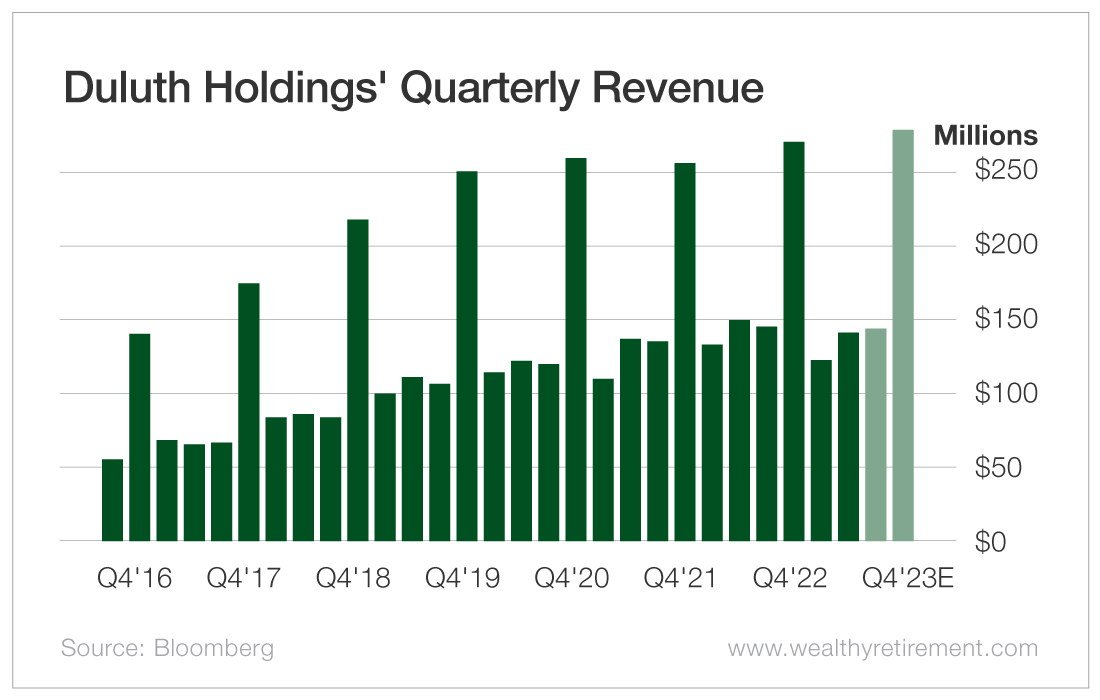 This is what I call a telltale “sawtooth” pattern. 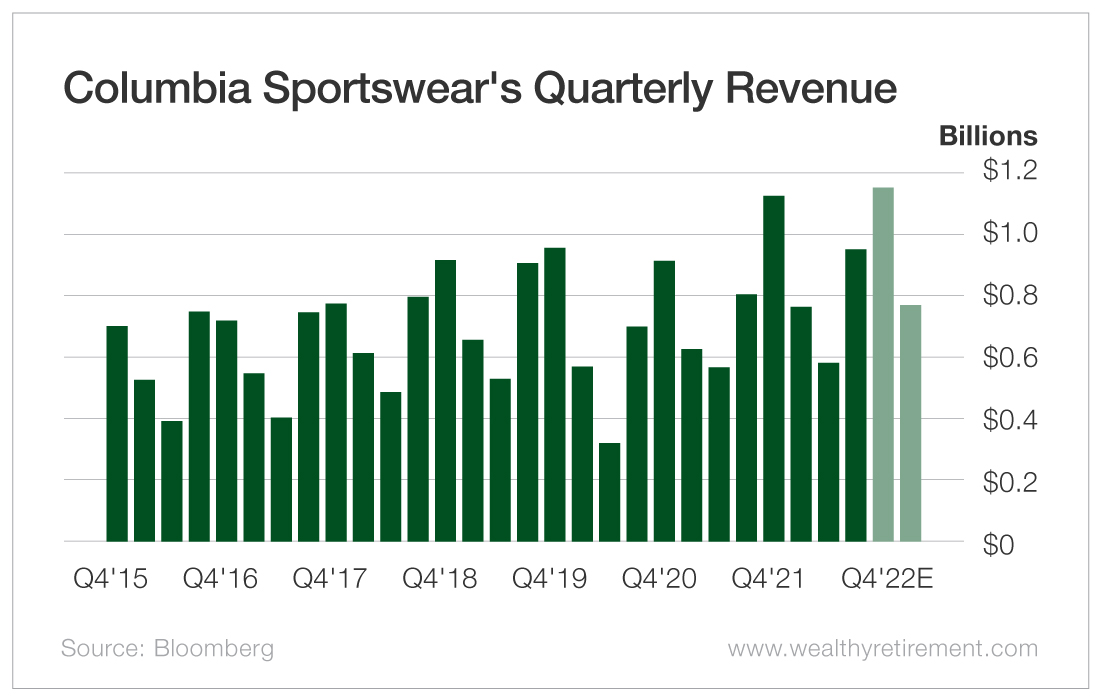 (I actually hold the record for the largest win in Oxford Club history for a 2,733% partial return on Columbia Sportswear from several years ago.) 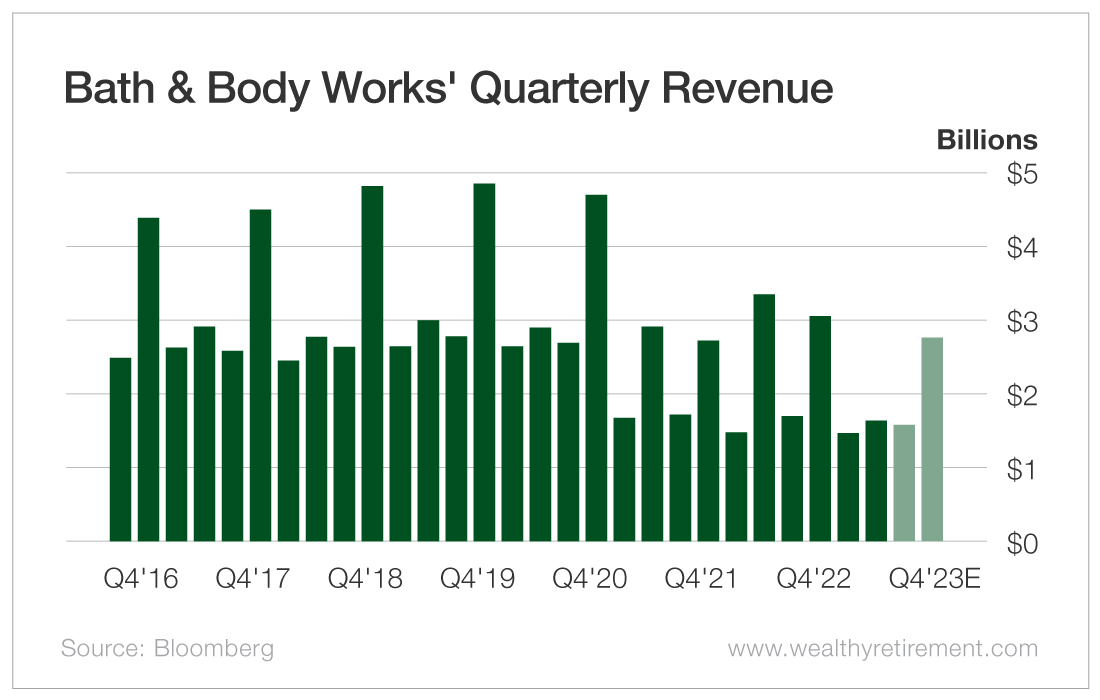 You can also find this pattern in Apple (Nasdaq: AAPL), Etsy (Nasdaq: ETSY), Shopify (NYSE: SHOP) and other e-commerce, as well as brick-and-mortar, retailers.

Year after year, these companies see revenue spikes during the same quarters… and their share prices tend to follow revenue.

And that’s regardless of the larger economic fears.

Recognizing which companies have this sawtooth pattern in their revenue is a great way to capture profitable upswings in share prices.

And with all of this consumer spending on the horizon, now you know why a trend and seasonal trader like me loves this time of year.