The No-Brainer Buying Opportunity of the Pandemic

Editor’s Note: Here at Wealthy Retirement, we’re thrilled to embark on another year of helping you achieve your dream retirement.

Chief Income Strategist Marc Lichtenfeld and Chief Investment Strategist Alexander Green recently sat down with a special investor who’s pinpointed a strategy for earning 4X more on all of your regular trades.

If financial security and wealth building have earned a place among your 2021 New Year’s resolutions, you won’t want to miss this.

In May, I said that within 12 to 18 months, we would look back on bank stocks as having been the no-brainer buying opportunity of the pandemic.

My reasoning was that while the share prices of the banks had been beaten down, their long-term earnings power hadn’t been diminished.

I made the call that within two years, the banks would earn just as much as they did in 2019 and that their share prices would follow those earnings back to pre-pandemic levels.

I based all of this on the fact that going into the pandemic, the big banks’ balance sheets were in their strongest position in recent memory.

Since the financial crisis, the balance sheets of the companies in the entire sector have been recapitalized, loan underwriting standards have been upgraded, leverage levels have been reduced and regulators have stayed on top of banks like never before.

I believed that with their strong balance sheets, the banks could comfortably handle the loan losses that the pandemic would throw at them.

My conviction on this trade was high, but I also cautioned that some patience would be required. I didn’t expect much for at least a couple of quarters as the banks built up their loan-loss reserves.

I am happy to report that the trade is playing out exactly as I hoped.

After trailing the market for six months as those loss reserves were built, banks’ share prices started ripping higher at the beginning of October. 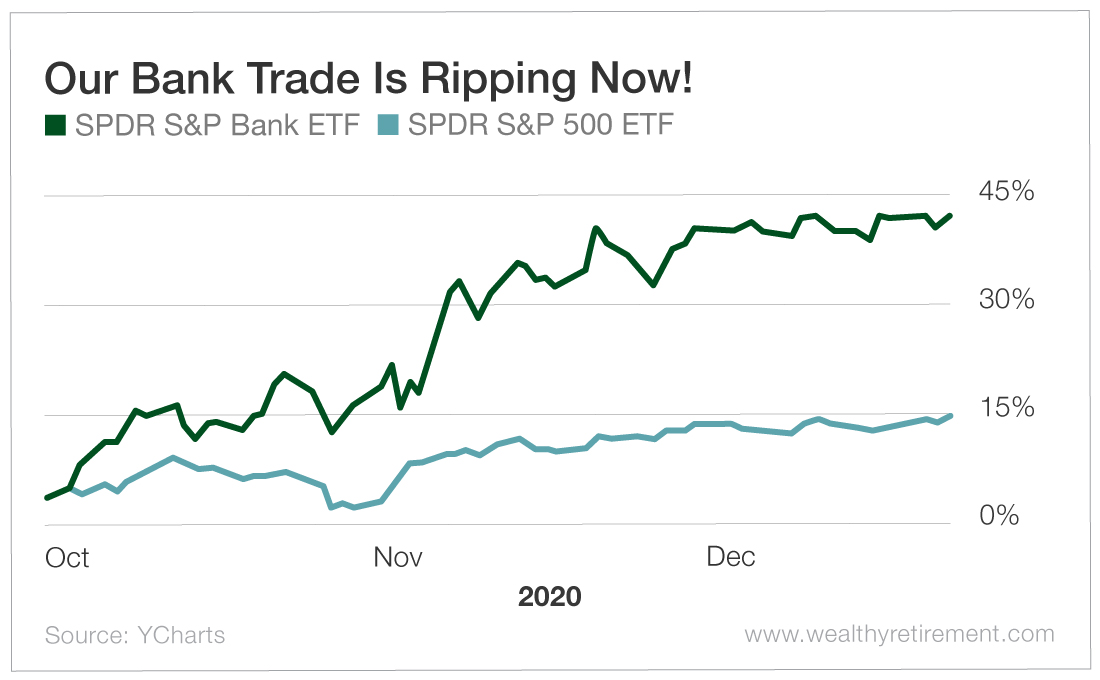 I believe there is more outperformance to come…

The Fed Gives the Big Banks the “All-Clear”

Back in the second quarter of 2020, the U.S. Federal Reserve imposed a limit on the amount of dividends that banks could pay and placed a complete ban on share buybacks.

Instead of dividends and repurchases, the Fed wanted that cash to strengthen bank balance sheets.

Priority No. 1 was having a strong banking system that could help our economy manage through the pandemic.

Late in December, after putting the banks through another round of stress test exercises, the Fed announced that the ban on share repurchases would be lifted.

This showed that the Fed believed banks had officially weathered the worst of the pandemic and emerged in great financial shape.

This is terrific news for those of us who have been pounding the table on banks since the pandemic started.

This Stock Can Still Double

This news from the Fed makes me even more bullish on one bank stock in particular: Wells Fargo (NYSE: WFC).

While Wells Fargo’s share price is up 50% from its pandemic low, I believe there is still tons of upside left.

Over the decade prior to the pandemic, shares of Wells Fargo traded at a price to tangible book value of 1.8 or higher. 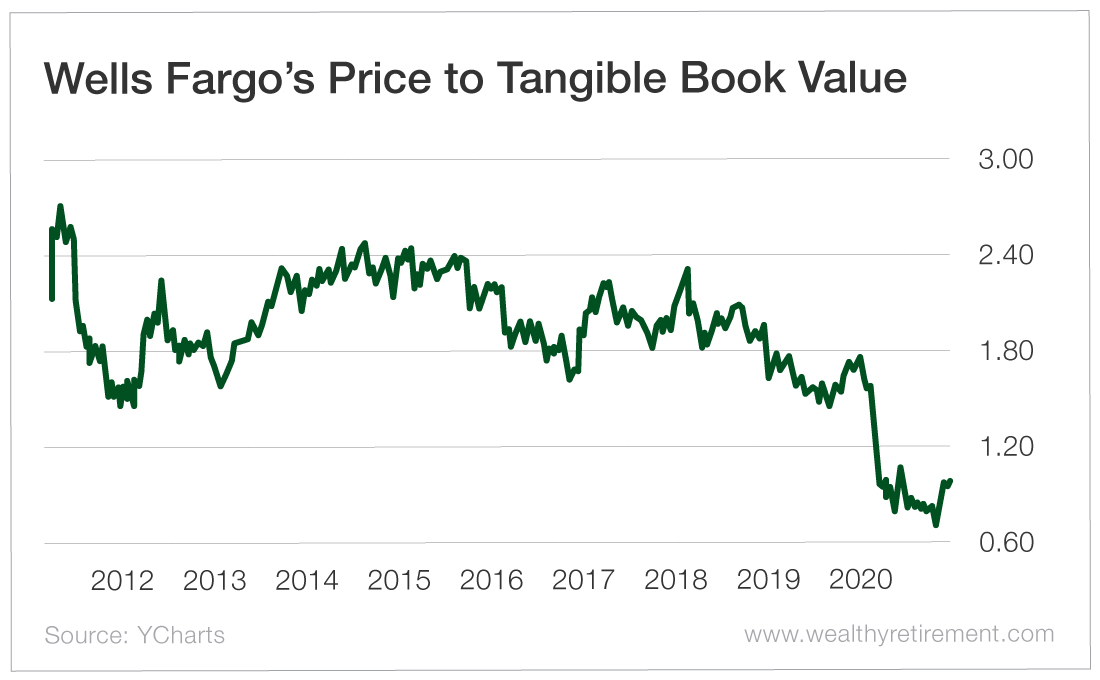 To get back to where the stock normally trades, the share price still has to nearly double.

I believe that it will. There is a massive catalyst coming to help it get there…

A huge boost to earnings.

While competitors like Bank of America (NYSE: BAC) and Citigroup (NYSE: C) have streamlined their operations over the past decade, Wells Fargo hasn’t.

New management at Wells Fargo has identified $10 billion of low-hanging cost cuts that will be fairly easy to realize.

That would add $2 per share to earnings for Wells Fargo.

With banks normally trading at roughly 10 times earnings, that could mean a $20 increase to Wells Fargo’s current $30 share price.

Again, this $10 billion reduction in costs isn’t something that is going to happen overnight.

But over the next 12 to 18 months, those cost cuts will start working into Wells Fargo’s earnings.

As that happens, the market will start acknowledging that with a much higher share price.

I think this could be a $60 stock two years from now.