Last May 26, I predicted that in 12 to 18 months, we would look back at American banks as having been the no-brainer buying opportunity of the COVID-19 crisis.

Two specific factors made me extremely bullish on U.S. banks at the time…

The banking sector deserved to be beaten down in 2009.

This time, it didn’t.

I did stress at the time, though, that bank stocks were not a short-term trade.

I expected that the banks would have a rough stretch of earnings that could last 12 to 18 months because there would be bad loans to be written off.

That said, I believed that the banks could recover to where they were trading pre-pandemic because their earnings would recover.

I identified the SPDR S&P Bank ETF (NYSE: KBE) as a diversified way to take advantage of this opportunity in banks.

If bank share prices follow earnings back up, the SPDR S&P Bank ETF would see a move from $29 today to almost $50, which represents 72% upside for the entire sector.

Here we are 11 months later, and I’m happy to say that the SPDR S&P Bank ETF has arrived at our $50 price target ahead of schedule. 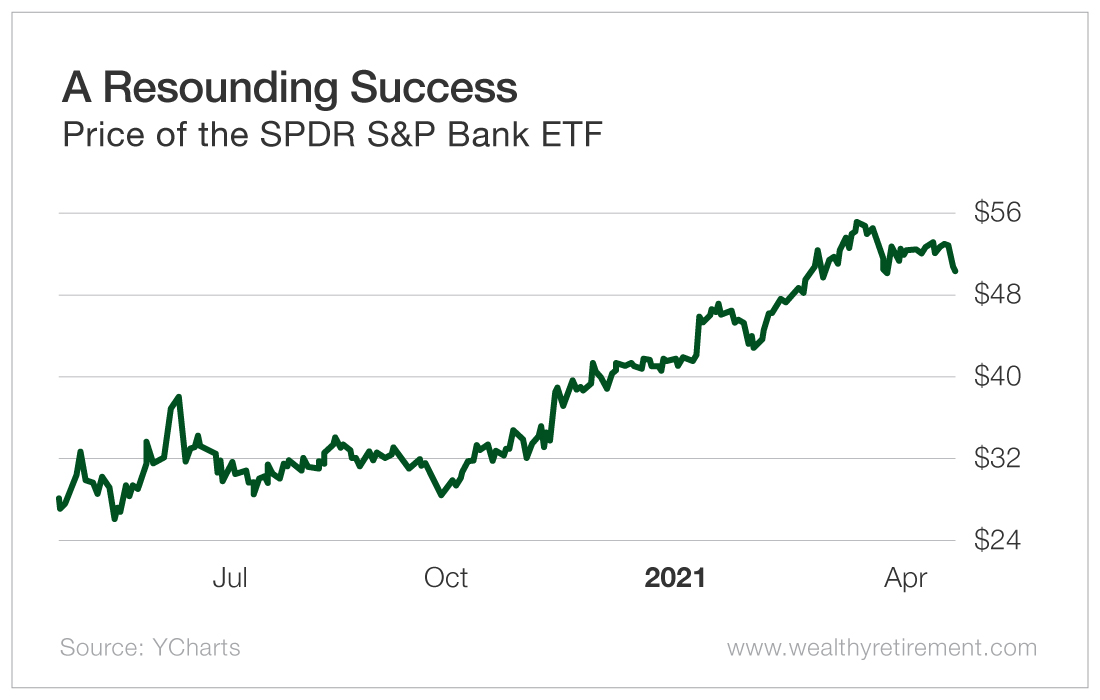 The exchange-traded fund (ETF) actually reached $55 in March, so we even passed our desired destination.

Even better, the ETF has widely outperformed the overall market. 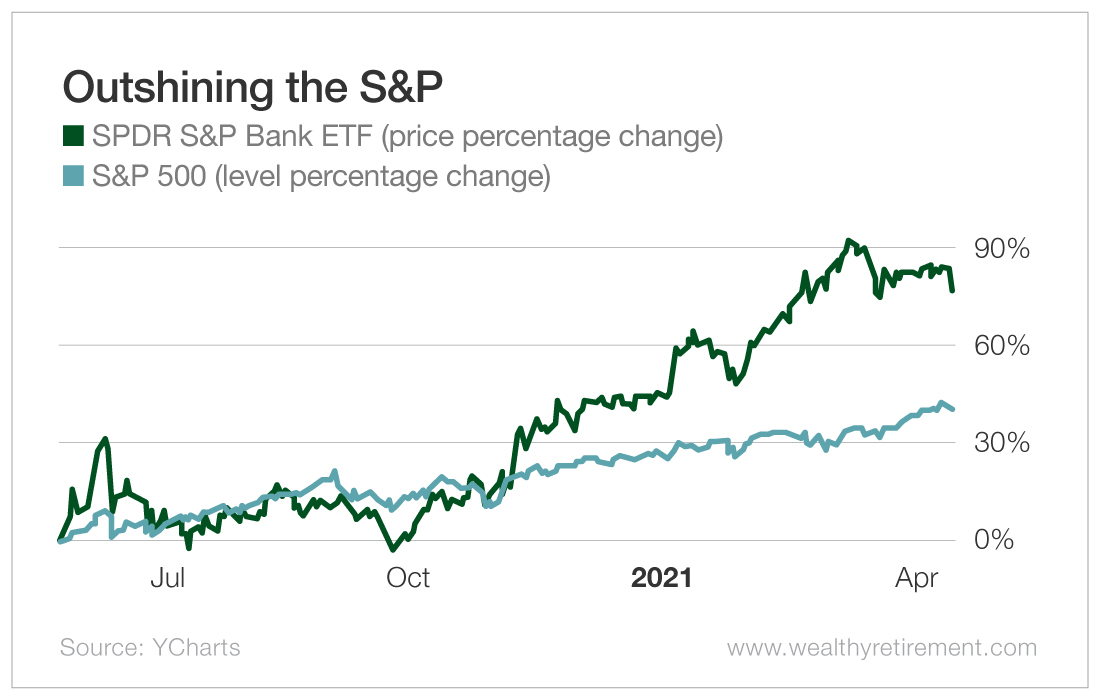 With so much upside now behind us, I think most of the banking sector is getting pretty close to fairly valued.

There is still some upside left, but with the entire sector up by 75%, the easy money has been made.

My Favorite Bank Still Has Room to Run

This one took a little longer to work out, but it was worth the wait.

On September 22, I provided “10 billion reasons” to add Wells Fargo (NYSE: WFC) to your portfolio.

I was referring to the $10 billion annual expense reduction that Wells Fargo CEO Charlie Scharf had just told the public was achievable over the next couple of years.

Note that a normal year of earnings for Wells Fargo in recent years is $20 billion. Therefore, that $10 billion of expense reductions would mean a 50% boost to Wells Fargo’s total income. 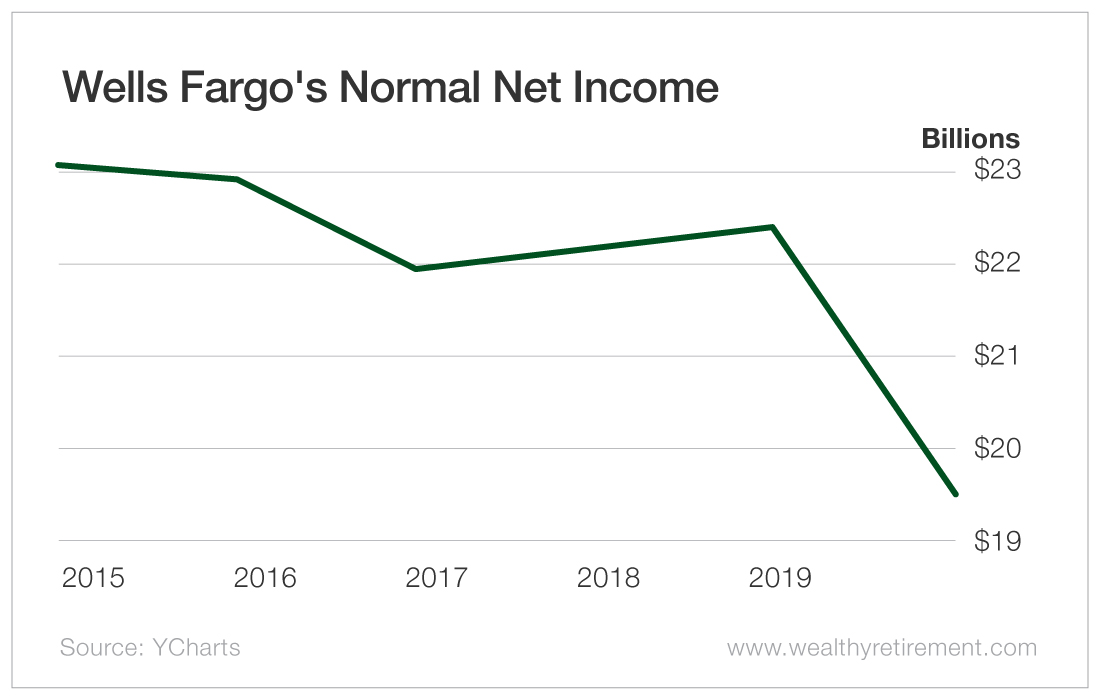 In addition to the $10 billion of expense reductions that are coming, I also loved Wells Fargo’s stock back in September because it was incredibly cheap.

At the share price of $25, Wells Fargo was trading for barely over 60% of book value. Historically, the bank has traded at almost twice that multiple – closer to 120% of book value.

Since September, Wells Fargo’s share price has gone on a tear. With the stock now well over $40, our favorite bank has more than tripled the S&P 500’s performance over that time. 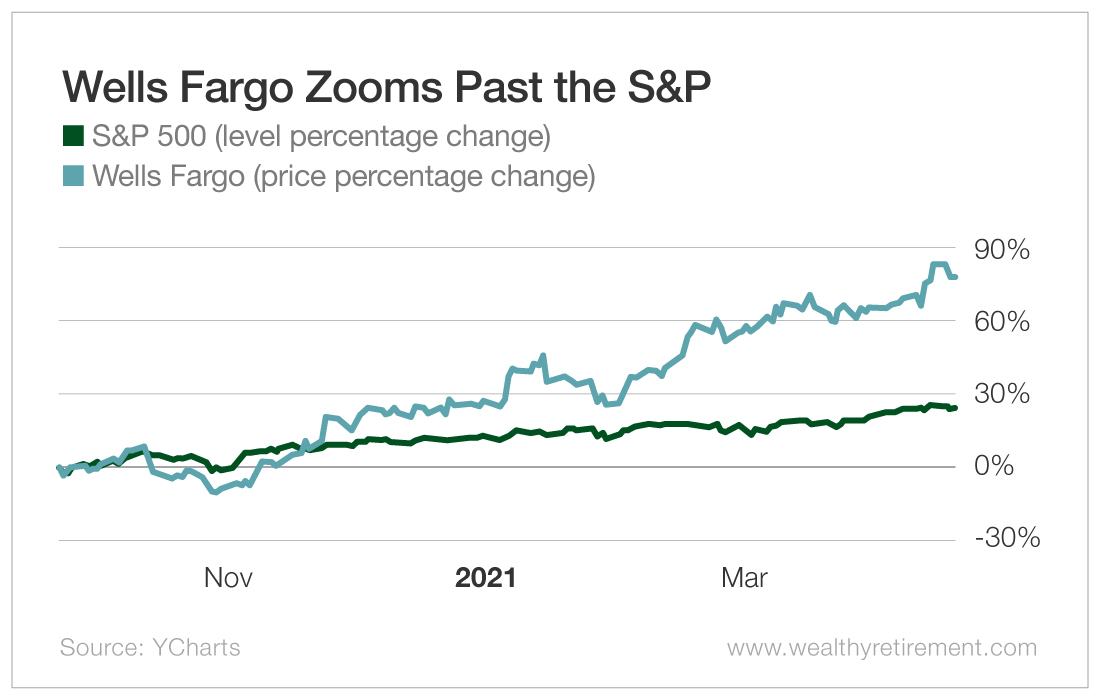 And while I think the banking sector overall is no longer a table-pounding “Buy,” I do think Wells Fargo has more room to run.

With Scharf’s $10 billion of expense reductions still to come, I think Wells Fargo could generate annualized earnings of more than $6 per share by the end of 2022.

At a conservative price-to-earnings multiple of 10, that would put shares of Wells Fargo at more than $60, which is almost 50% higher than where it sits today.

Can Exxon Mobil Barrel Its Way to Dividend Safety?