Canadian Oil Producers Can Save the West

On his first day in office, President Biden revoked a key permit and put an end to the Keystone XL oil pipeline project.

The Keystone XL was a key pipeline designed to transport 830,000 barrels of oil per day 1,200 miles from the province of Alberta down to Nebraska.

One of the reasons for the cancellation of the pipeline was President Biden believed the Keystone XL pipeline would worsen climate change by encouraging growth in Canadian oil production.

President Biden believes climate change to be a major issue.

Last year, while talking with American troops stationed in the United Kingdom during a trip for the G7 conference, Biden called climate change the single “greatest threat” to U.S. national security.

But now a more pressing threat to U.S. national security has suddenly appeared.

We now have a gentleman in Russia, President Vladimir Putin, who isn’t afraid to make not-so-subtle threats about using nuclear weapons.

And that man controls a big percentage of the world’s oil.

When the Facts Change, You Have to Change

Putin’s actions have flipped the oil market on its head.

Not much more than a year after canceling the Keystone XL pipeline, President Biden is now reportedly looking for ways to bring more Canadian oil into the United States.

Last year, he was preoccupied with how Canadian oil might have helped exacerbate climate change.

Today, a lack of a secure source of oil is a bigger concern.

I’ve previously written about how many of our European allies are desperately reliant on Russian natural gas.

Russian oil is equally important on a global scale, especially in regard to the United States.

On a daily basis, the U.S. consumes just under 20 million barrels of oil.

Meanwhile, we produce more than 11 million barrels of oil.

That means the U.S. must import almost 9 million barrels of oil each and every day to meet daily consumption!

The country is extremely vulnerable to external oil supply shocks.

If something curbs global oil supply, like a Russian oil embargo, the United States has a big problem.

You get the picture.

It has been a long time since an international event seriously threatened the ability of the United States to access the crucial lifeblood of the economy.

The last time was in the early 1970s, during the Arab oil embargo.

Now the Russian invasion of Ukraine and consequent bans on Russian crude have created a similarly desperate situation.

If the invasion of Ukraine ends, the world isn’t going back to what we knew just a few months ago.

The Western world has been dealt a stiff lesson that we need energy independence.

We should have realized this a long time ago.

Yes, we want to transition to cleaner fuels, but that is going to take decades.

The United States can no longer afford to rely on Russia, Saudi Arabia, Iraq or Venezuela to supply its oil.

You can’t have your energy security in the hands of unfriendly, even belligerent, countries.

Canada is already the largest supplier of American oil imports.

I think it’s clear that the United States should be looking to get access to as much Canadian oil as possible going forward in order to limit our reliance on unfriendly countries.

I feel that in the years ahead, the fallout of Putin’s aggression will be good news for Canadian oil producers.

There should be room to grow production as the U.S. welcomes more oil.

The current high price of oil is already great news for Canadian producers.

At near-triple-digit oil prices, these producers are generating a massive amount of free cash flow.

Interestingly, though, the market isn’t valuing these Canadian producers with regard to current oil prices.

I recently read a report from JPMorgan that estimates that large Canadian producer Cenovus Energy (NYSE: CVE) is currently valued as though West Texas Intermediate is priced at $57.

My analysis confirms the same. It’s true for almost all Canadian oil producers. These companies still aren’t getting much love from investors.

While this company is priced for oil in the $50s, the daily trading price for oil is almost twice that.

I first recommended Cenovus to Wealthy Retirement readers at the start of October because of the producer’s enormous free cash flow yield.

The trade has worked out exceptionally well. 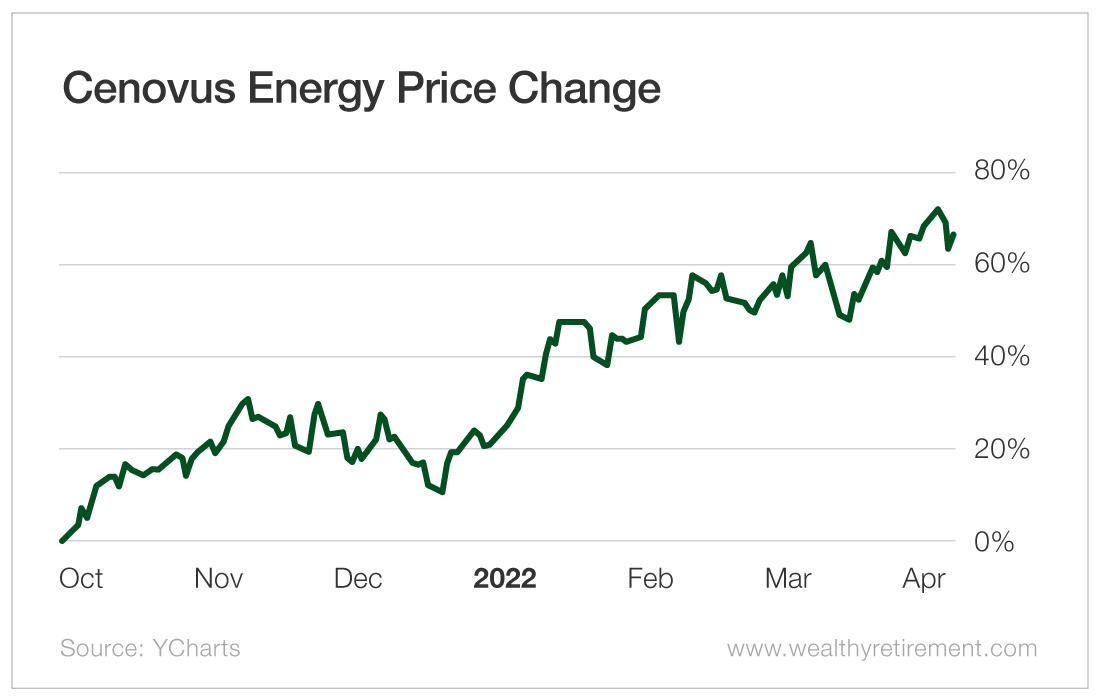 Despite the big share price increase, the value proposition hasn’t really changed that much for Cenovus because the increasing price of oil has pushed cash flows up at nearly the same pace.

With Cenovus valued by the market today as though oil is in the mid-$50s, the stock still has plenty of room to run. It would make a great addition to any investor’s portfolio.

I don’t know whether oil will go up, down or sideways from here.

There are too many moving pieces at work right now.

The price of oil will likely remain volatile.

But if oil prices stay at or near current levels, Cenovus will be a profitable investment over the next five years.

Great valuation, huge oil resource and located in a very safe, stable country – what’s not to like about this Canadian oil producer?

Is This Popular 6% Yielder’s Dividend Safe?

How to Pick the Next Great Stock

Take Advantage of “Mr. Market” When He Gets...

Investing in Crypto Can Benefit Your Retirement Portfolio