This Sector Has Been a Safe Haven From the Storm

I was early, but I was right.

At the time, consumer staples stocks were trading at historically low valuations relative to the rest of the market.

For perspective, consumer staples stocks normally trade at premiums of 10% to 20% to the overall market because they’re tied to high-quality, recession-resistant companies, like packaged food company General Mills (NYSE: GIS).

Admittedly, these companies are far from exciting, but their revenues, earnings and cash flows are extremely predictable, as is their long-term growth. This means they usually fetch a hefty price compared with other stocks.

But things were different in June 2021…

These stocks were priced at an extreme discount, as shown by the dip below 0% in the following line chart. 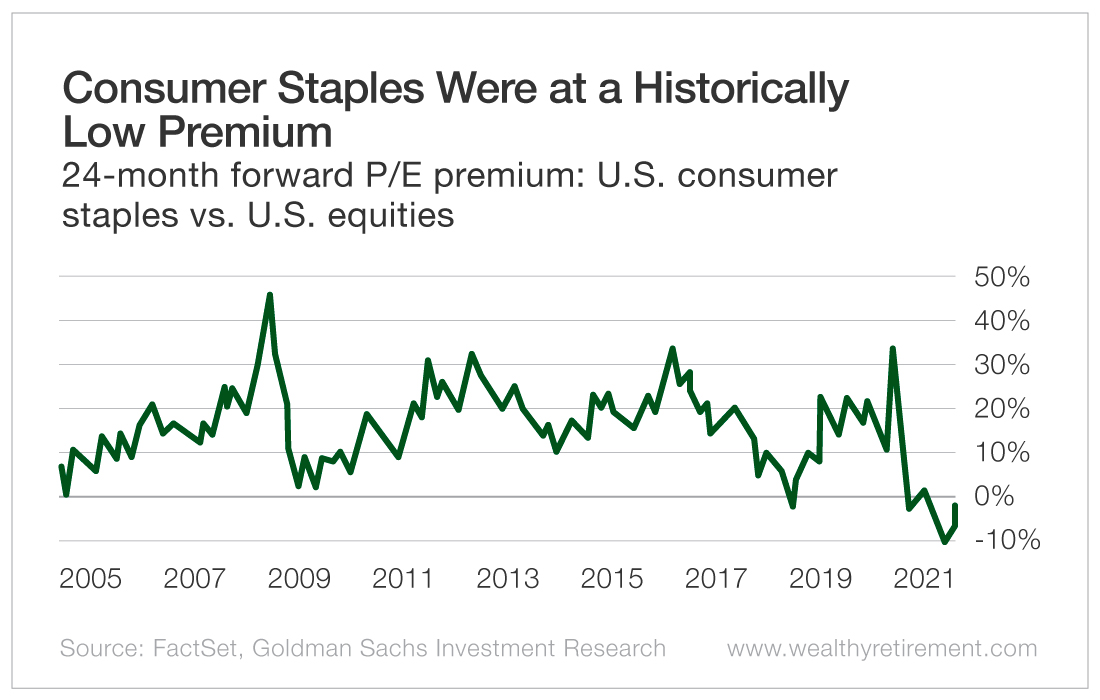 This discount took shape because the overall market had become bloated thanks to overvalued sectors, like tech.

In fact, last June, the S&P 500 was in the 98th percentile in terms of historical valuation. 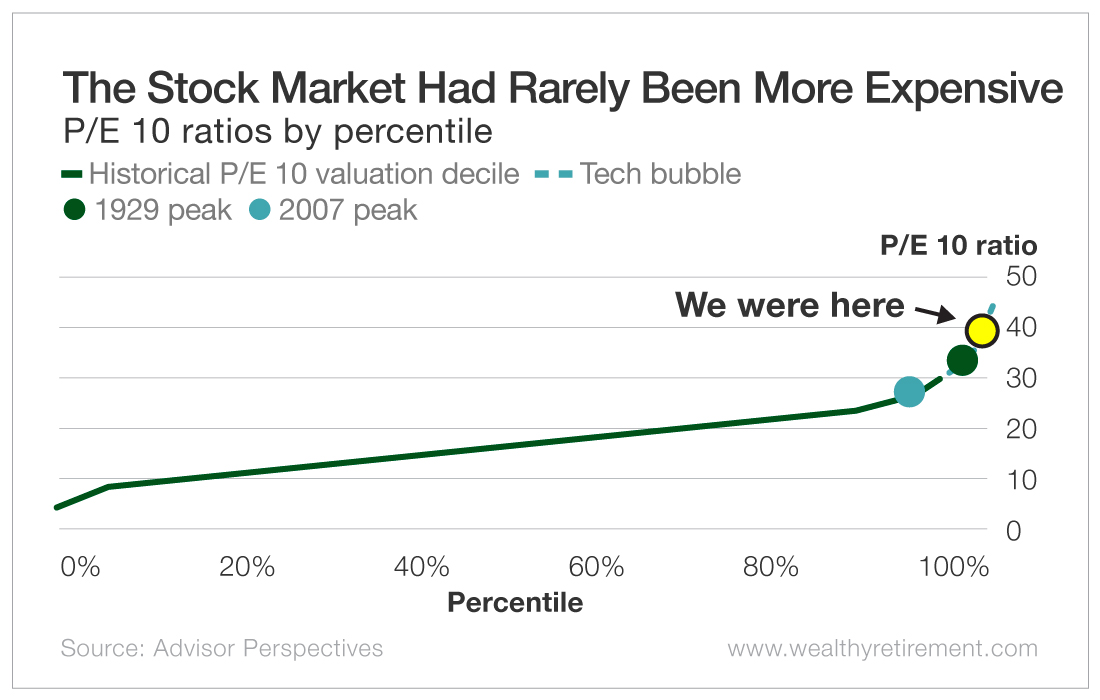 The only time the market had been more expensive was during the dot-com bubble of the late 1990s, when once again, the tech sector had reached frothy valuations.

This meant consumer staples stocks, backdropped by such an expensive overall market, had never been more attractively priced relative to other stock market options…

Consumer Staples: A Reliable Port in the Storm

So far, 2022 has been a harsh year for stocks – except for consumer staple stocks, which have held up remarkably well.

The sector is flat on the year, while the tech sector has lost a quarter of its value and the S&P 500 is now inching toward bear market territory. 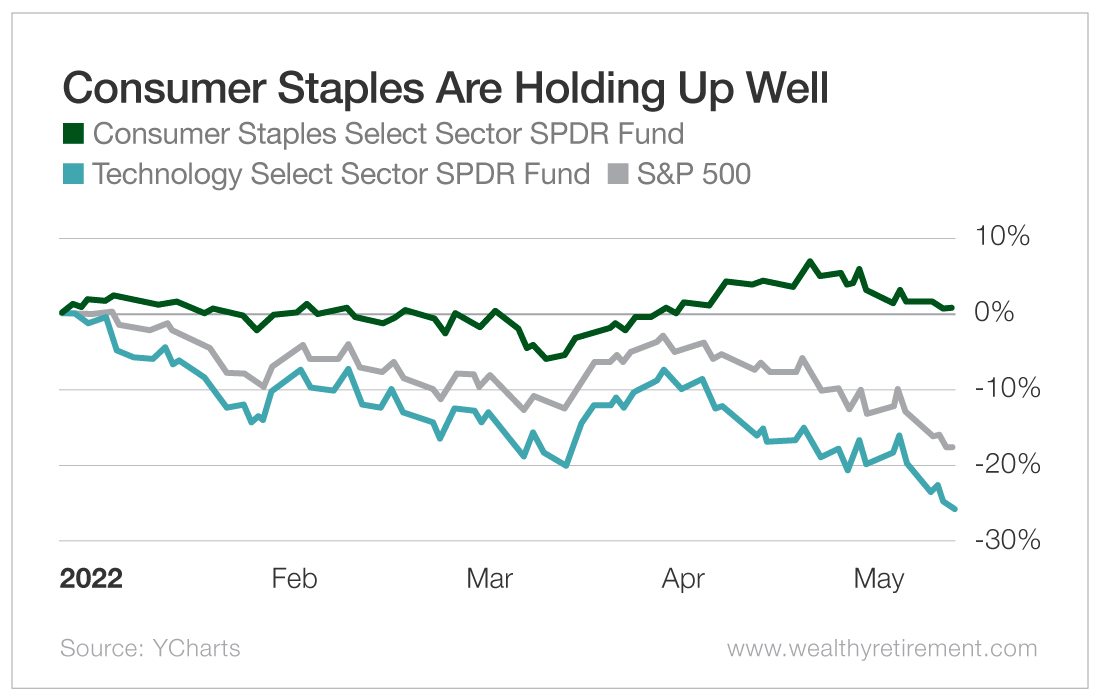 Flat is typically mediocre, but flat is great when it means outperforming the market by 20-plus percentage points.

This is how high-quality, attractively valued stocks hold up during times of market turbulence – they outperform. 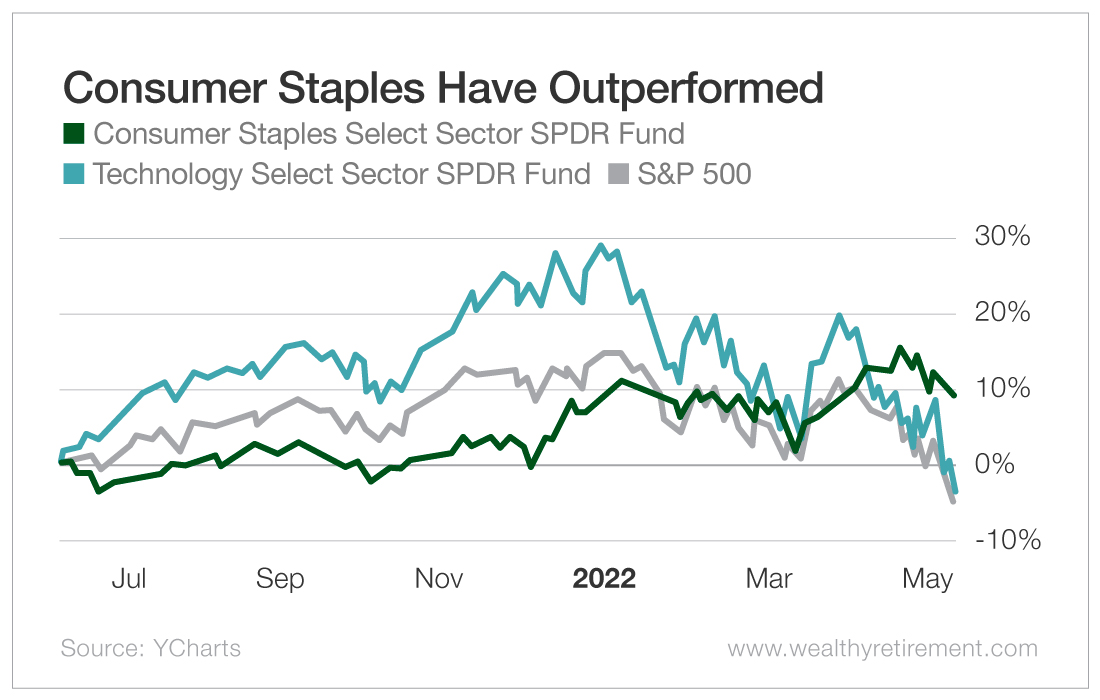 Outperforming tech stocks was the flavor of the day.

Unsurprisingly, that was exactly when investors should have been looking to this area of the market.

Investors tend to use the rearview mirror when making investment decisions.

They look at what has happened instead of what’s going to happen.

As investors, we need to look through the windshield to see what’s coming at us.

Last June, I saw through my windshield some historically attractive valuations that suggested to me that consumer staples were set to outperform.

They have and, by doing so, have been a steadying presence for portfolios during a difficult 2022.

Don’t Count on This 14% Yield in the Future

Cut Your Losses and Let Your Winners Run

The Hidden Opportunities Your Broker Isn’t Telling You...

Three Stocks to Beat Back the Bear