Is Your Broker Ripping You Off?

Editor’s Note: Before you read Marc’s eye-opening piece on choosing the right financial adviser, Wealthy Retirement has an exciting announcement.

Every day, we try to put out the best, most useful content that will make a difference in the lives (and futures) of our readers.

But to do that, we want to know a little more about YOU.

So, starting this week, you’ll see a quick poll in your Wealthy Retirement emails. It’ll be short and on a retirement-related topic (yes, we even want to know where your dream vacation is).

Take a few seconds to answer, and then on Saturdays, we’ll send out the results. Not only will it help us help you, but it’s a fun way to see where you stand among your peers.

(In case you were wondering, my dream vacation spot is Rome. Ciao!)

My wife’s eyes filled with tears as she read the note: 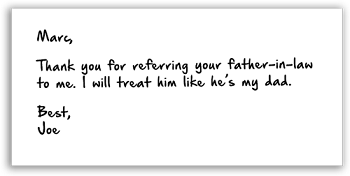 My father-in-law is a Holocaust survivor who, through extremely hard work, tenacious saving and smart investing, achieved the American Dream. He put three kids through college (and one through law school), and now travels and lives life on his terms.

Smart enough not to mix family with finances, he asked me if I could recommend a financial adviser to help him manage his money. I recommended Joe, who had worked with my grandmother.

Joe is a nice guy and was good to my grandmother, even hand-delivering flowers on her birthday. More importantly, he handled her finances responsibly.

Legally, he had to.

Joe is a certified financial planner (CFP). Unlike a run-of-the-mill stockbroker, CFPs are fiduciaries, which means they must act in the best interest of their clients. He would not have been allowed to put my grandmother in an investment that offered him a fat commission if there were better options.

Shockingly, brokers who are not legally considered fiduciaries do not have the same strict guidelines.

So in 2016, when the Department of Labor passed a rule stating that all financial advisers and brokers would be considered fiduciaries, it was not surprising that sales of products meant to enrich those who sell them (instead of those who buy them) fell off a cliff.

I’ve made no secret of my disgust for annuities.

In my new book, You Don’t Have to Drive an Uber in Retirement: How to Maintain Your Lifestyle without Getting a Job or Cutting Corners, I have an entire chapter dedicated to annuities titled “The Worst Investment You Can Make.”

I have never been a fan of annuities and for years have written about how you can build a greater nest egg and generate more income by investing in the stock market – especially Perpetual Dividend Raisers.

But what really cemented my thinking that annuities were terrible investments was the Department of Labor ruling.

After the fiduciary rule passed in April 2016, sales of annuities fell 8% for the full year. They plummeted 18% in the fourth quarter. Variable annuities – the worst of the worst – tanked 22% in 2016.

Keep in mind, the rule had passed but was not implemented yet. In other words, it was not law. Brokers were still not considered fiduciaries, yet many of them stopped selling annuities in anticipation of being held responsible for their actions.

The fiduciary rule still has not been put into effect. The Trump administration has delayed its enactment and is expected to kill the rule entirely, eliminating important protections for investors from unscrupulous brokers.

Anyone who is being sold an annuity (there’s an old expression, “annuities aren’t bought, they’re sold”) should ask themselves one question… If annuities are such fabulous products, why did salespeople slam on the brakes when they were told they would have to act in their clients’ best interests?

The next time you’re working with brokers or financial advisers who will earn a commission or fee from their work with you, ask them if they must adhere to the fiduciary standard.

If they don’t, they may tell you they follow the “suitability” standard, which states they have to make recommendations that are “suitable” for their clients but not necessarily in the best interests of their clients.

A broker following the suitability standard could recommend a mutual fund that is suitable for your needs but carries a 5% load – of which he’ll get paid a generous commission. An adviser following the fiduciary rule would find a cheaper option.

And a broker could recommend an annuity as being suitable for an investor seeking income, despite the exorbitant fees and steep penalties for early withdrawal. A fiduciary would have to have very good reasons why a high-priced inflexible annuity is ideal when cheaper alternatives exist.

Not all financial advisers will make you cry with touching notes. But they should have your best interests in mind when making recommendations, not theirs.

Be sure you’re working with a fiduciary if you use an adviser.

What’s the REAL Value of Your Stock?