How were these guys making sense of the seemingly random price action coming across their screens?

The first two tasks were no problem. But I had a tough time seeing how those moving prices on my screen could be interpreted and lead to a decision to buy or sell a stock.

And then one day, a trader showed up on the desk with a new data source. And when he hit “3” on the keyboard, the stock’s chart came up. He quickly toggled between a daily chart, an hourly chart and a five-minute chart.

Technical analysis? I had no idea what he was talking about. There was no Google back then. So I spent that weekend at the library devouring everything I could find on the subject of technical analysis – the study of stock charts (or charts of other financial instruments).

Importantly, I learned that these charts are visual representations of human emotion – greed and fear. And those emotions repeat in patterns and are somewhat predictable.

For example, here’s a chart of Alibaba (NYSE: BABA). 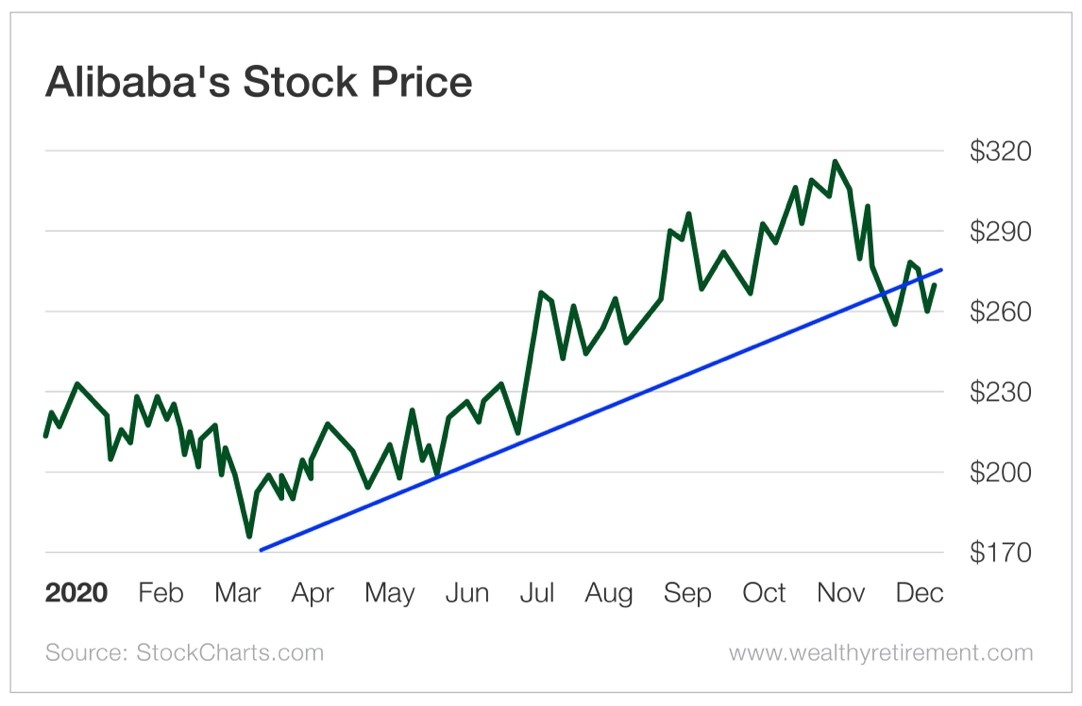 You can see that starting in late March of last year, the stock began to move higher. Let’s say that in June 2020, you were looking for a good entry point.

If you drew a trend line, which is a straight line connecting the lows of the stock, you’d see that it would be best to buy the stock when it came down to the trend line because in the past, it had bounced off that area of support.

(“Support” is a price level where investors and traders come in and buy the stock – “supporting” it.)

In late June, you could have bought the stock at $240 and eventually made money. But if you had waited until the stock came back down to its trend line, you would have done even better…

You’d have bought it at around $210 and ridden it higher for months, as the stock didn’t break the trend line until November 2020.

For whatever reason, when the stock previously came down to the trend line, buyers jumped in. When it breaks the trend line, it’s a sign that buyers are no longer coming to the rescue.

Let’s say last October, you were interested in Alibaba. You could have bought it at $310 and then watched it fall all the way down to $250, taking a sizable loss.

This is just a very simple example. There are many, many ways to use technical analysis.

Twenty-two years ago, I was told, “Go learn some technical analysis.” I’m still studying it every day. I can’t imagine making a trade recommendation without it.

Your Six-Point Value Investing Checklist for 2022

How to Use Volatility to Your Advantage

Why It Pays to Start Strong When Saving...

How to Avoid Disaster in Your Portfolio