“The Kids Are Alright,” but This Board of Directors? Not So Much

Last week, I had the privilege of teaching classes on investing to students participating in World of Money.

World of Money does an incredible job giving kids from financially vulnerable households the skills to become not only financially literate but also financially successful.

Importantly, they learn the right way to manage money. They are exposed to concepts like compounding, passive income and the proper use of debt.

It’s an amazing program that I have been a part of since 2016. I’m inspired by these bright and eager kids after every session.

Unfortunately, that feeling was short-lived.

The day after my most recent class, I watched MicroStrategy (Nasdaq: MSTR) once again treat its shareholders like chumps.

Incredibly, management boasted about its irresponsible decision to mortgage the company’s future on Bitcoin.

I’ve written about MicroStrategy before. Back in February, when its stock was trading at more than $900, I called it the “biggest short in the market.” Today, its stock is trading in the mid-$600s. I’ve been vocal in the media, including in Bloomberg and Fox Business, about management’s and the board’s reckless behavior.

Yesterday, MicroStrategy released its second quarter results. For those of you who are unfamiliar with MicroStrategy, it is a mildly successful business software company. Until recently, when, in addition to software, it started speculating on Bitcoin.

In fact, it’s gone all-in. MicroStrategy converted all of its cash to Bitcoin and has borrowed money to buy more. It also has plans to sell $1 billion worth of stock and use the cash to… you guessed it, buy Bitcoin.

In the second quarter, MicroStrategy lost $30.71 per share because of an impairment charge on its Bitcoin holdings. Remove that charge, and the company was profitable.

But would you lend someone $50,000 to make that bet? Would you invest in a company that did that? If you were on the board of directors, would you approve that loan?

Now, I know many of you are saying Bitcoin is not the same thing as a thoroughbred racehorse. But you can’t deny that Bitcoin is volatile. In the past three months, the price of Bitcoin was cut in half from nearly $59,000 to below $30,000.

Is it responsible for a company to convert its cash and borrow money to buy assets that drop 50% in a matter of weeks? 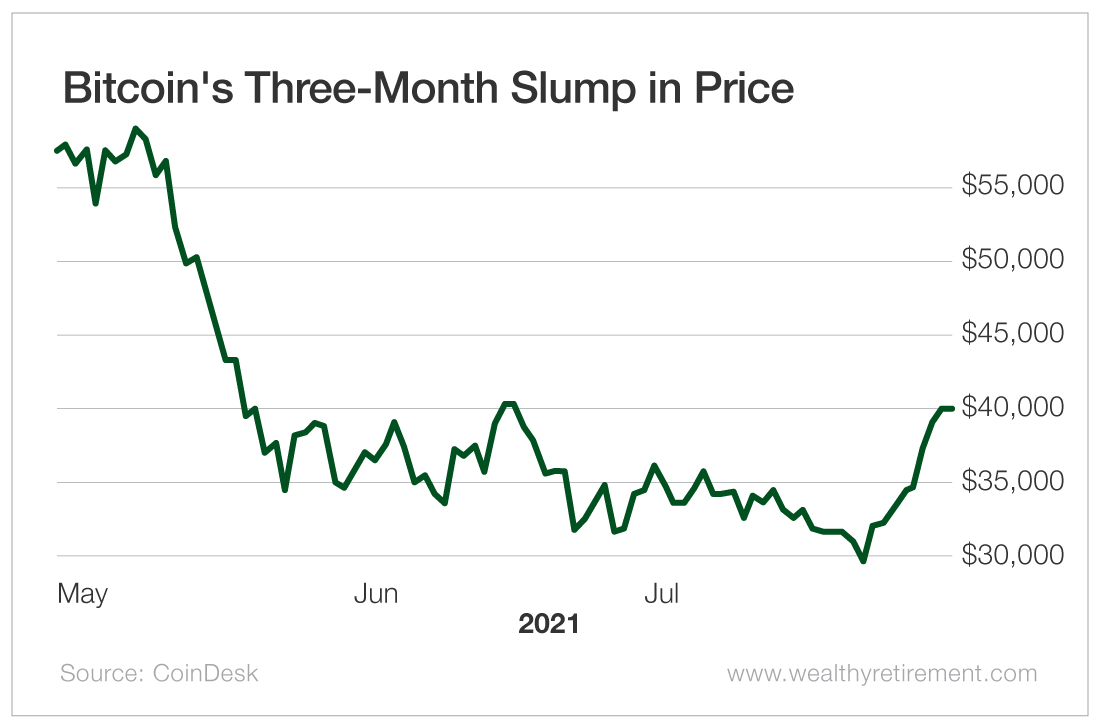 Of course, many will argue that Bitcoin has utility and value. But right now, it really doesn’t.

Only hackers and cybercriminals actually use Bitcoin for financial transactions. Maybe someday it will be universally used as a currency, but it isn’t now.

The astonishing thing to me about this situation is the number of people who are actually cheering on MicroStrategy and its “business model.”

If an investor wants to speculate on Bitcoin, I say go for it. It could go meaningfully higher from here.

But why would anyone want to invest in MicroStrategy, a company that is borrowing money and diluting shareholders by issuing more shares all for the sole purpose of buying a speculative asset?

I would say the same thing if, instead of Bitcoin, MicroStrategy was using the funds to buy gold, silver or Shohei Ohtani rookie baseball cards. These things all have value and may go up over the long term.

But should a company borrow money to buy them?

It doesn’t shock me that a CEO who is extremely bullish on Bitcoin wants to do this.

What is incredible to me is that the board of directors has ignored its fiduciary duty to shareholders. Even more startling, those same shareholders trust MicroStrategy’s management and board to use their capital in a way they never would themselves.

Maybe MicroStrategy’s board of directors needs to sit down with some kids who went through World of Money to learn how to handle money the right way.

P.S. You can follow me on Twitter for my thoughts on investing and the markets throughout the day. I’m @stocksnboxing.

A Crash Course in Chart Patterns

Why This “Dirty Word” Deserves a Place in...