In the March issue of my newsletter, The Oxford Income Letter, which comes out tomorrow, I mentioned that I recently remarked to a friend, “It feels 1999-ish.”

Investor sentiment is extremely bullish. Not just bullish, mind you – unearned overconfidence is off the charts.

I’ve been involved in the markets for 31 years, 25 of them as a professional. It may shock you to know that I am never extremely confident. Do I believe in my convictions? Absolutely. Do I believe that the market could prove me wrong at any moment? Absolutely.

I’ve seen too many really smart people get their heads handed to them because they not only were wrong but also invested too much in their position or refused to sell when it was clear they were wrong.

I was reminded of this investor overconfidence the other day on Twitter (you can follow me @stocksnboxing).

CNBC posted an article about mutual fund manager and fund family founder Ron Baron. He said he doesn’t invest in Bitcoin because he doesn’t understand it despite being a “fairly sophisticated investor.”

Ron Baron is worth $3 billion.

Maybe Bitcoin will skyrocket and he will miss out on further riches.

But the hubris of an average Joe to tell a multibillionaire to “enjoy staying poor” because he doesn’t invest in Bitcoin is not something you see at the bottom of a cycle.

Then there’s an article I read about young workers putting all of their retirement money in Bitcoin. One 30-year-old stated, “It’s the best long-term asset to hold.”

Maybe he’s right. But you still don’t put all of your money in one asset. That is extreme optimism.

It’s not just in Bitcoin where sentiment is through the roof. Special purpose acquisition companies (SPACs), tech stocks and heavily shorted stocks have all caught investors’ attention, and those investors have driven the stocks higher.

Bank of America recently said bullishness among sell-side analysts is so high it’s about to trigger a sell signal. (To get a better understanding of what the sell side is, click here to see my recent video about it.)

In other words, Bank of America is saying its peers are too bullish.

The COVID-19 vaccines are giving millions of people hope that they can begin to resume their normal lives in the very near future. That optimism will surely spill over into the economy.

And with spring around the corner, it makes sense that people are feeling hopeful – perhaps for the first time in a year. And that good cheer is reflected in their bullishness. 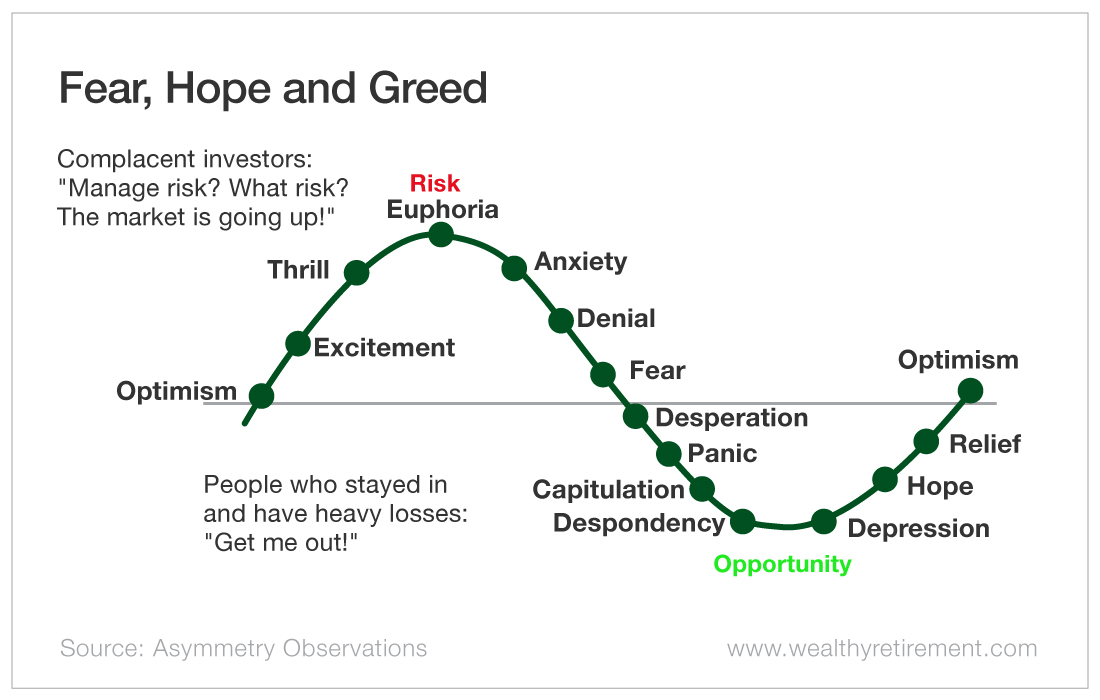 Above is a well-known chart that shows the emotions associated with investing.

Where do you think Bitcoin investors are right now on this chart? How about stock investors?

I’d say Bitcoin investors are between “thrill” and “euphoria.” If Friday hadn’t been so strong, I’d have said stock investors may be tipping toward “anxiety,” but the rally likely kept them on the top of the hill rather than on the downslope.

In my 30 years in the market, I’ve seen this movie several times. I know how it ends.

Little did he know back in 1982 when he released the song, Prince was singing about the dot-com boom and bust.

Sentiment today feels awfully similar to sentiment in 1999. I’m not saying we’re out of time. I don’t try to time the markets.

But 30-year-olds putting all their eggs in one speculative basket or believing anyone who thinks differently is a moron – including those with decades more experience and successful track records – doesn’t happen at the beginning of rallies. It happens near the end.

Watch sentiment closely. If it gets any more extreme, it may be time to get very cautious.

P.S. Speculative investments like Bitcoin haven’t proven their worth and resilience over both up and down markets – but dividend stocks have.

That’s why I’m presenting on a special class of dividend stocks called “Dividend Disruptors” at the MoneyShow March Virtual Expo on March 17. Click here to register for free.

Don’t Trust Analysts Who Have Conflicts of Interest

A Game Where the Odds Are Always in Your Favor

Your Six-Point Value Investing Checklist for 2022

Get In, Get Out and Get Gains With...

Use This Secret to Profit When the Market...

Three Key Takeaways From the Worst Trade of...

The “Best” of Marc Lichtenfeld