I just started David and Goliath by Malcom Gladwell. The book details how underdogs overcome obstacles and how those with perceived advantages aren’t always in the best position for success.

The opening of the book describes the biblical story of David and Goliath and how David was able to overcome what seemed to be insurmountable odds to slay the giant.

It turns out that Goliath, despite being much larger than David (and being heavily armed and armored), was not prepared for the shepherd boy’s weapon.

Goliath had weapons and armor – he was geared up for close combat. But David had a sling, so he wouldn’t have to get near the giant.

They were fighting two different fights.

Despite being much smaller, David actually had the advantage in that he was able to use his weapon at a distance without ever having to get near Goliath’s sword.

Investors are perceived to be at a great disadvantage to Wall Street. The pros have more capital behind them, more knowledge and more tools.

The little guy, armed perhaps with just a few thousand dollars and a Fidelity account, has no chance of beating the big institutions that have four Bloomberg screens, one-on-one calls from analysts and enough financial firepower to buy a small country.

Only 37% of actively managed mutual funds have beaten their benchmarks (the S&P 500 or an appropriate index related to their fund’s strategy) over the past 15 years.

Fortunately, regular investors have the financial equivalent of the stones in David’s sling: Perpetual Dividend Raisers.

These are companies that raise their dividends every year. By doing so, they outpace inflation and increase buying power.

The longer you hold your Perpetual Dividend Raisers, the less performance you need out of the stocks – though companies that raise their dividends every year typically are growing earnings and cash flow and perform quite well.

Take Prudential Financial (NYSE: PRU), for example. It’s not exactly a high-flying stock. No one is going to mistake Prudential for Tesla (Nasdaq: TSLA).

But Prudential has raised its dividend for 13 straight years. While today it yields 5%, if you’d bought the stock 10 years ago, you’d be sitting on a yield of 7.5% – which is almost the annual return of the S&P 500 each year.

So just by sitting and collecting the dividend, you’re pretty much matching the market’s performance.

While institutional traders are slugging it out with each other, trying to get every dollar advantage they can to try to beat their indexes, long-term owners of Perpetual Dividend Raisers often match or beat the S&P with their dividends alone.

Then, when the stocks increase in price, their performance really shines…

The S&P 500 Dividend Aristocrats Index, which is made up of S&P 500 companies that have raised their dividends for 25 years in a row, beats the pants off the S&P 500. 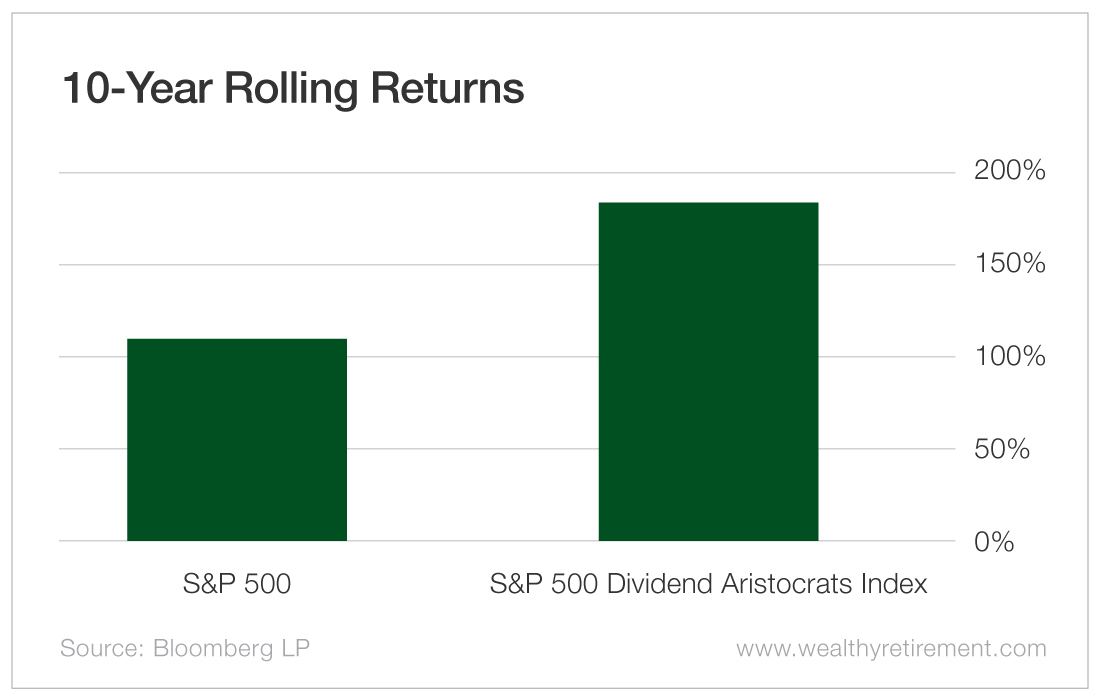 That means Dividend Aristocrats outperformed the S&P 500 by a compound annual growth rate of 5.6% per year. If a fund manager beat the S&P by 5.6% per year for 10 years, they’d be considered a rock star in the industry.

Yet as an individual investor, all you have to do is invest in these types of companies, and you can easily be the rock star.

Most professional investors actively trade stocks, constantly looking for “alpha,” which is excess return on investment. It’s how their performance is measured and what their bonuses are based on.

They don’t have the ability to sit with dividend stocks for years. That doesn’t generate fees or impress bosses with bold market calls.

The big Wall Street pros, with all of their “weapons” and “armor,” can’t defeat individual investors who have the ability to invest in a completely different way.

You can be a little guy (or woman) and slay Wall Street by owning quality Perpetual Dividend Raisers for the long term.

P.S. Tomorrow’s the day! I’m sitting down with Chief Investment Strategist Alexander Green and TradeSmith CEO Keith Kaplan in order to uncover the truth about how everyday investors can score up to 4X MORE on regular trades. Don’t miss out! Click here to register for the virtual event.

A Wealth-Building Lesson From a 22-Year-Old

Three Key Takeaways From the Worst Trade of...