The dividend safety rating of Dow Chemical (NYSE: DOW) may be a victim of its time.

Let me explain… Dow Chemical was spun off from DowDuPont last year when the company split into three parts.

As a result, Dow Chemical as a stand-alone company has a very short dividend-paying track record.

In my dividend safety rating system, a company needs to have a solid history of paying dividends. Otherwise, it gets a penalty in its rating.

The most important issue for Dow Chemical is that this year, free cash flow is forecast to slip 5%.

Though the company has been on its own for only a year, it has broken out its financials for several years, and the numbers had been improving until 2020. 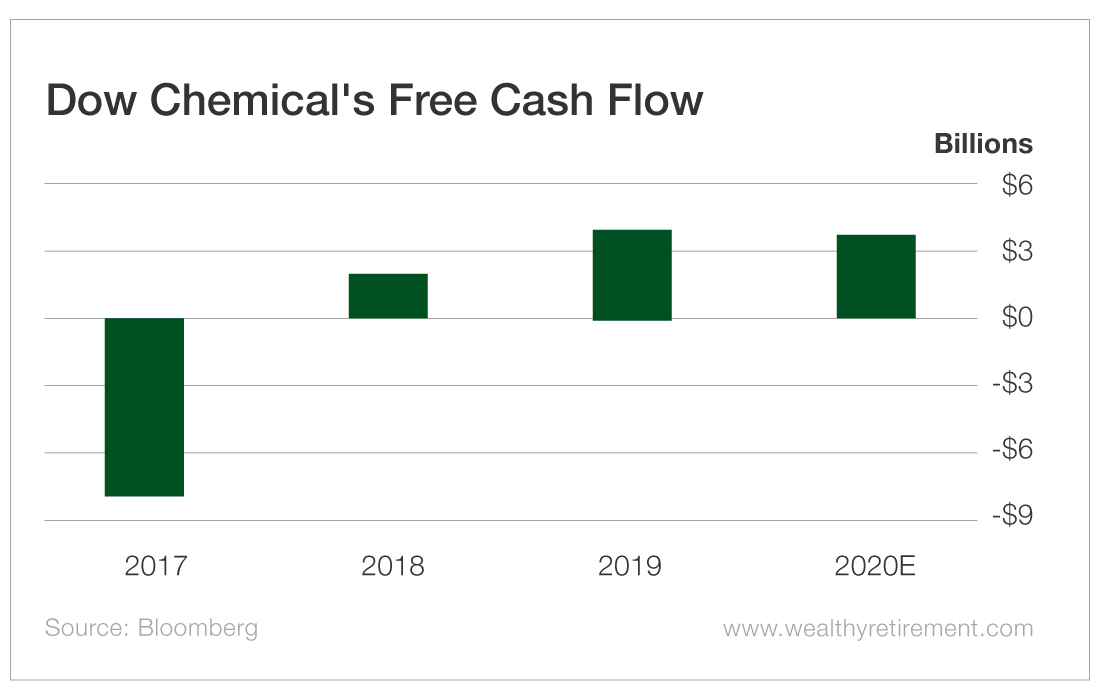 Last year, Dow Chemical paid out 53% of its free cash flow in dividends. This year, it is forecast to pay 57%.

Here’s where it falls victim to extenuating circumstances again…

Prior to the COVID-19 outbreak, if a company’s payout ratio was more than 75%, it received a penalty in its dividend safety rating. Any stock with a payout ratio less than 75% was considered safe.

If I had written up Dow Chemical in January, I would have said that with a 57% projected payout ratio, the company could easily afford the dividend.

However, as the economy tanked and many companies slashed their dividends, I took a much more conservative approach with SafetyNet Pro. I lowered the threshold for a ratings penalty to a 50% payout ratio instead of 75%.

I’d rather be too careful of a company cutting its dividend than rate a stock too high and have investors surprised by a reduction in the payout.

Dow pays a quarterly dividend of $0.70 per share, which comes out to a robust 6.7% yield. It could easily reduce the dividend and still have an attractive yield for shareholders.

Interestingly, if I had written this article in January, the rating would have been a “C.” But the new, stricter model takes it all the way down to an “F.”

Keep in mind, I’m not saying a cut is imminent – but if free cash flow comes in below expectations, it wouldn’t surprise me if the company did in fact reduce the dividend in 2021.

Is This REIT’s Dividend Just What the Doctor...

This Household Name’s Cash Flow Is Plunging… Is...