written by Mable Buchanan Saturday, May 2, 2020

In the wake of the COVID-19 crisis, there are two faces to the healthcare industry.

On one side, due to a 60% drop in patient volume, half of independent medical practices have had to lay off physicians, according to the Medical Group Management Association.

Justin Wolfers, an economist at the University of Michigan, remarked, “Nearly half of the Q1 decline in GDP can be attributed to healthcare, which is presumably delaying of elective procedures.

“It’s a strange reality that in the midst of a pandemic, we have a healthcare-led recession.”

On the other side, biotech has proven its resilience as a sector.

Take a look at its long-term recovery from the market bottom set in 2009. 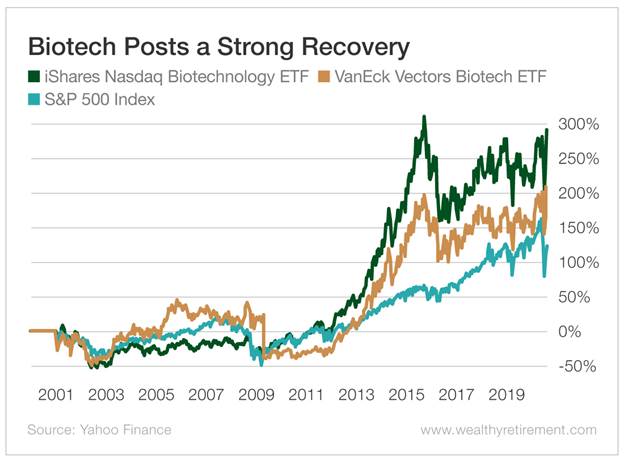 And Wednesday’s jump in the S&P 500 in response to positive news on the drug development front indicates that we might have a healthcare-led recovery as well.

“I would argue that biotech is the most important sector in the market and will be for the next five to 10 years and beyond,” Marc says.

But as far as a cure sparking an economic recovery, he says, “It typically takes a long time – years – to cure diseases.”

Given the delay in a cure, investors need to drown out the one-trick ponies that fill the mainstream news with questionable claims.

Instead, look to biotech companies with the best track records, best pipelines and best fundamentals.

According to biotech analyst Daniel Ward, in the fourth quarter of 2015, an investor who invested in all 30 companies that reported working on an Ebola vaccine would have lost an average of 2.3%.

Meanwhile, an investor who invested in the most successful of these companies would have made 1.25X their money.

“You can hit some big home runs in the biotech sector,” according to Marc. “But you need to manage your risk when trading these stocks.”

For the best chance at profits, home in on the individual biotechs with the most potential for treating or preventing COVID-19.

To that end, Marc recently shared several companies that he’s been keeping an eye on, including Johnson & Johnson (NYSE: JNJ), Roche Holding (OTC: RHHBY) and others.

Look to This Sector for Out-of-This-World Gains