Biotech’s Past, Present and Future

Lifesaving medical innovations can be some of the most profitable – and satisfying – allocations for investors’ savings.

This system was designed to make all surgeons great surgeons.

Combining the best of human judgment and technological precision, this invention from Intuitive Surgical (Nasdaq: ISRG) has been used in more than 1.5 million surgeries, starting with a coronary bypass in 1998.

It earned approval from the Food and Drug Administration in 2000, the same year the company went public. And since then, the burgeoning robo-surgeon has more than delivered for its investors.

From the company’s initial public offering through August 2016, it posted a rise of 2,300%.

Along the way, Members of Wealthy Retirement‘s publisher, The Oxford Club, who got in on the Club’s Intuitive Surgical recommendation, more than quadrupled their money.

In 2015, another promising medical innovation hit the presses: Abbott Medical Optics, then a subsidiary of Abbott Laboratories (NYSE: ABT), had developed a special lens.

When placed in the eye post-cataract removal, it could restore vision.

Now, the Tecnis lens is the go-to solution for aphakia, or trouble focusing due to a missing eye lens.

This condition affects fewer than 1% of cataract patients – but in a study conducted from 1997 through 2001, 87% of aphakia cases were not expected prior to the surgery, and many of those cases required a second operation to resolve the issue.

Abbott’s lens was a game changer for these patients.

AMO was the right fit for us because of their history of innovation and strong positions in surgical ophthalmology, especially their momentum in the cataract space.

It wasn’t the eye care business’s first time being acquired. When Abbott announced its initial acquisition of the company – then known as Advanced Medical Optics – back in 2009, its shares jumped 143%.

Across the board, mergers and acquisitions can provide a powerful boost to a biotech company. That’s why merger and acquisition potential is one of three top catalysts Chief Income Strategist Marc Lichtenfeld considers when assessing a prospective healthcare investment.

Teladoc Health (NYSE: TDOC) has been a poster child for the COVID-19 stock market thanks to its focus on virtual medicine.

The company connects providers and patients safely and confidentially online.

Marc featured the stock back in 2018 in his article “Medical Breakthroughs You Need to Know About.”

But the e-health provider has another trick up its sleeve…

By the end of the second quarter, Teladoc will finish acquiring InTouch Health.

True, many of us would still prefer a human doctor to an android one. But there’s no denying that AI can support medical professionals in making the right calls.

Some studies argue that physicians’ diagnoses are incorrect up to 15% of the time.

Database-scanning digital masterminds (and inquisitive chatbots) can help mitigate this issue without the inconvenience or danger of seeing multiple specialists during a pandemic. 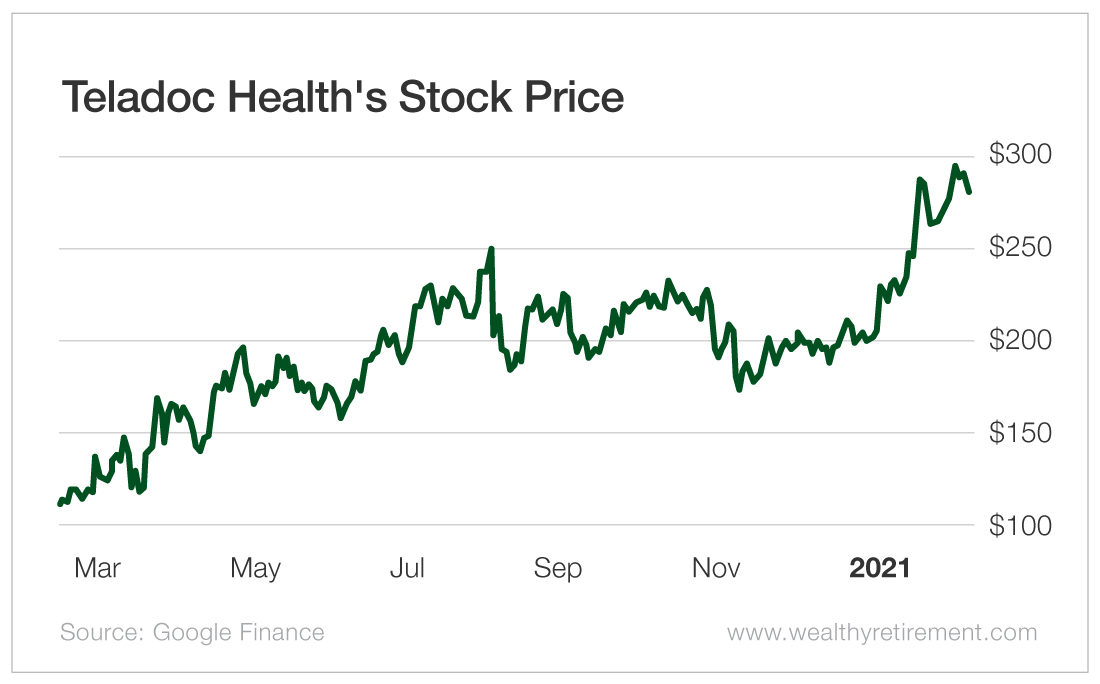 Investors who got in last year have more than doubled their money.

What’s Next for Medical Innovation?

I asked Marc what he was most excited to see in biotech going forward.

The development of the various COVID-19 vaccines is a game changer. The fact that we have several vaccines developed in one year is mind-boggling.

It proves what is possible with enough focus and resources. There will be a ripple effect throughout the industry, potentially shortening timelines for drug development.

There are some amazing new technologies, like RNAi, CRISPR, CAR-T therapies, and other gene and cell therapies, that are already having profound impacts on terrible diseases.

As these technologies are studied further, the number of diseases that could be cured – cured, not treated – will increase significantly.

Now companies like Teladoc Health fight to solve next-generation problems. And the race to a COVID-19 cure has sent this process into overdrive.

We may see some of our most exciting medical innovations yet.

Medical Breakthroughs You Need to Know About

Why Phase 2 Trials Are Important to Investors...