There is a quote that has been attributed loosely to Ernest Hemingway that I find very useful in teaching my two daughters.

My preferred version of it is this:

When asked how he went bankrupt, the man replied, “Slowly, and then all at once.”

The point is that you can get away with something for a really, really long time.

And then, all of a sudden, you find yourself paying a price so dear you can’t believe how stupid you were.

I’m thinking of this quote today for a specific reason.

Because generally speaking, if you print a lot of money, you get inflation.

Well, let me tell you, folks…

The United States has been printing A LOT of money – more than ever before.

Take a look at the chart below from the Federal Reserve, which depicts the total money supply in the United States. 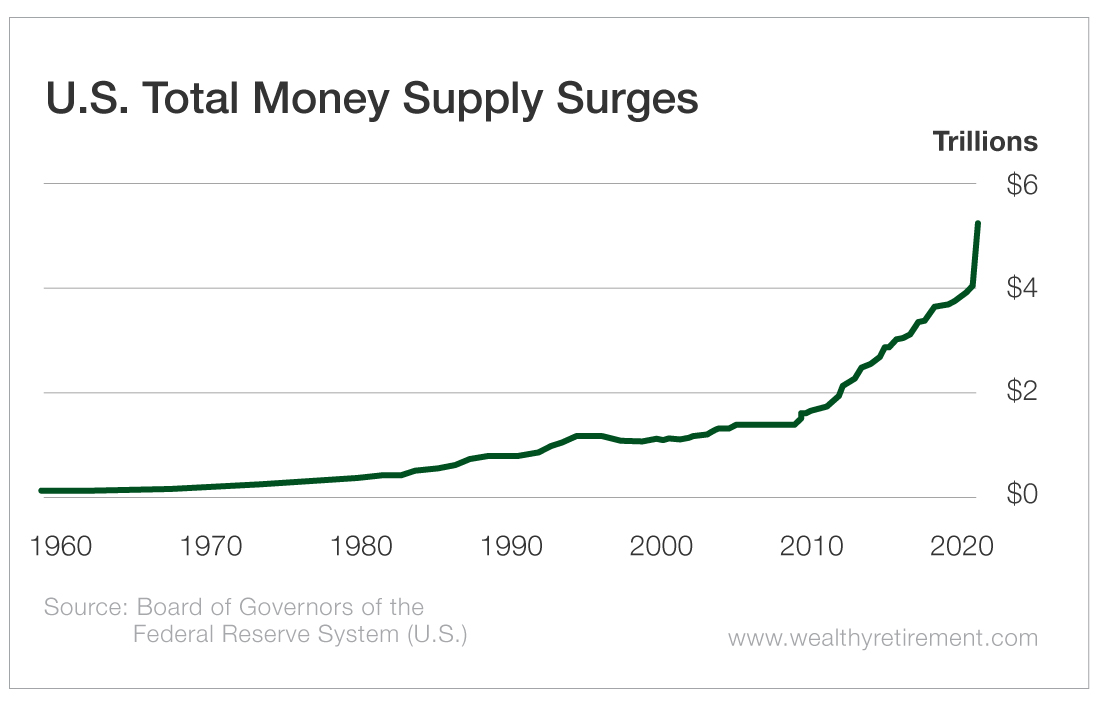 From the 1950s through 2008, money supply in the United States increased at a steady, measured pace.

Then the financial crisis hit, and the rate of increase in money supply accelerated sharply.

We all expected that once we were through the worst of that crisis, the money printing would stop.

With the emergence of COVID-19, the money supply graph has gone completely parabolic!

The increase in the last few months is equal to the entire increase over the 50 years from 1950 to 2000.

No wonder the price of gold has ripped through $2,000 per ounce and hit all-time highs recently!

The market smells inflation, and the gold price is our canary in the coal mine.

My generation has never had to deal with the wealth-consuming impact of the inflation monster.

You Don’t Have to Be a Gold Bug

Gold has had a tremendous run since the start of 2019.

That is a 65% increase in a year and a half – most of which has come since the coronavirus-induced money-printing acceleration.

There is every reason for people to be concerned about the value of money given the Fed’s surge in printing. That is good for gold prices.

Though, gold isn’t my preferred way to protect the value of my portfolio and net worth against the wealth-destroying bite of inflation.

I like my investments to generate income and grow. Gold doesn’t generate anything, and gold doesn’t grow. It just exists.

Instead, I think a better way to protect wealth against inflation is to own a diversified group of investments that benefit from rising prices.

I like the approach laid out by hedge fund legend David Einhorn in his second quarter letter that he just sent to his Greenlight Capital investors.

Einhorn believes that a big uptick in inflation is a real risk.

The securities that he has purchased for Greenlight Capital are meant to not just protect against inflation, but also profit from it.

In his letter, he named several of them and explained why:

To be clear, I’m not recommending any of these securities specifically, but I do like Einhorn’s diversified approach.

Even if Einhorn is wrong and inflation doesn’t become a problem, he still believes that the stocks he owns will do well.

But if inflation does suddenly become a problem, these good investments will quickly become great.