Over the past six months, I’ve issued several warnings about buying shares of Tesla (Nasdaq: TSLA).

The stock is dangerously overvalued.

With a nearly $600 billion stock market valuation and zero dollars of earnings from manufacturing cars, it may be the most overvalued stock I’ve ever seen.

Just look at how Tesla’s market valuation has skyrocketed in 2020! 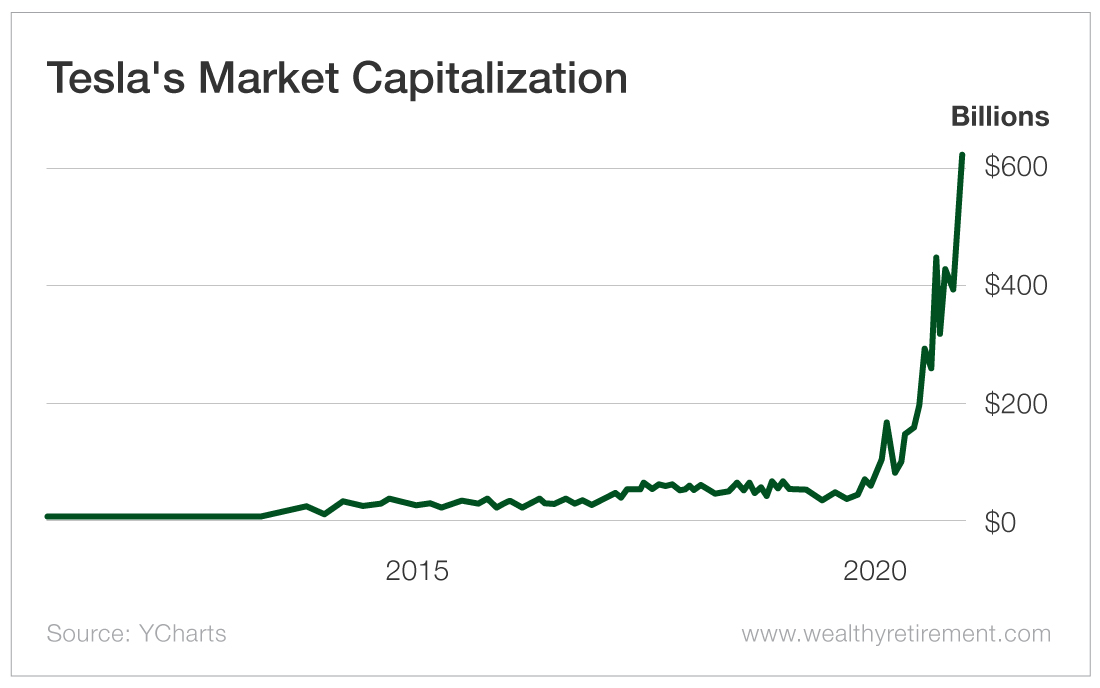 Do I wish that I had bought shares of Tesla at the start of 2020 and held on through today?

But if I had done that, I can guarantee you that I’d be taking advantage of Tesla’s crazy valuation now and selling every single one of those shares.

And that’s what Elon Musk has Tesla doing right now…

Tesla just announced that the company would be raising $5 billion of cash through the issuance of new common shares.

This is the second big equity issuance in recent months.

In September, Tesla also issued $5 billion worth of new shares.

Both of these equity issuances are brilliant moves.

As Warren Buffett is fond of saying, “The stock market is there to serve you and not to instruct you.”

The stock market often makes mistakes in how it values companies.

Sometimes, those mistakes are really big…

That is why I love investing in the stock market. These valuation mistakes create investment opportunities that we can exploit.

Today, by wildly overvaluing Tesla, the market is serving up an opportunity to Musk and his board of directors.

Musk and his crew are wisely exploiting that opportunity by issuing new shares at the company’s astounding valuation.

If I were Musk, I’d issue as many shares as I could.

Eventually, the market is going to wake up and value the company more appropriately…

I don’t want our Wealthy Retirement readers to get burned when it crashes.

Why Tesla Isn’t Worth the Risk

Again, folks, this is for a company that, as I recently explained, still doesn’t make any money.

Tesla has generated no profits from manufacturing electric cars.

At this valuation, Tesla isn’t priced for perfection. It is priced for earnings that the company may never achieve.

For perspective on how crazy Tesla’s valuation currently is, let’s compare it with the valuations of three of the most profitable companies in the market…

Tesla is now valued 42% higher than that despite making no money.

Johnson & Johnson (NYSE: JNJ) is another dominant global business that generates $17 billion of profits per year.

The market thinks that Tesla is worth about 50% more despite never making a nickel.

Tesla’s valuation is also 81% higher than UnitedHealth Group‘s (NYSE: UNH) despite Tesla having no core business earnings and UnitedHealth having $17 billion.

I could go on, but you get my point.

Tesla has the kind of valuation that usually needs to be backed up by billions of dollars of earnings.

But Tesla has yet to prove that it can make any money manufacturing cars. Its valuation is all hype and no substance.

With no earnings to underpin this huge valuation, there is really no limit to how far Tesla’s shares could fall.

Until then, Elon Musk and crew should keep exploiting this absurd valuation and issue as many shares as possible. But we should steer clear.

Credit to Musk for recognizing the gift that the market is currently offering and taking advantage of it.

A Big Biotech on the Verge of an Upgrade