Shares of Meta Platforms (Nasdaq: FB), formerly known as Facebook, are now down big-time from their September 2021 high.

The decline had been slow and steady until the bottom fell out following the release of Meta’s fourth quarter 2021 earnings results earlier this month. 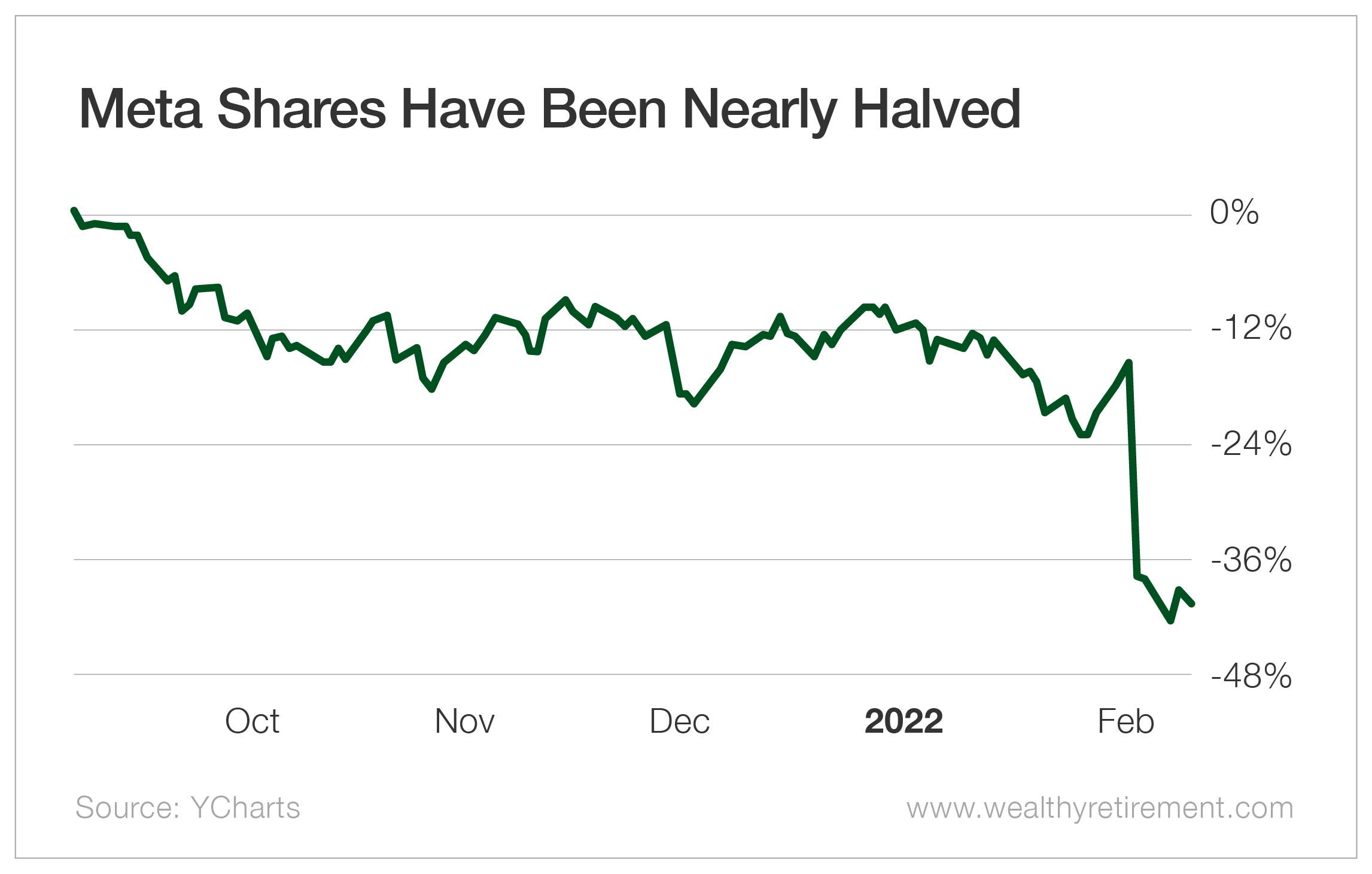 Second, for the first time ever, the number of daily active users of Facebook declined in the quarter, from 1.93 billion in the third quarter to 1.929 billion in the fourth quarter. It’s a small decrease but a decrease nonetheless.

Third, for the full year, Meta lost $10 billion in its Reality Labs segment – which is dedicated to transitioning the company to a metaverse-focused business.

The “metaverse” is a catchall term for a theoretical network that could intertwine virtual reality, augmented reality, social media and other elements of technology. Many futurists envision the metaverse as the coming “second internet” – except we’ll be able to virtually “live” within it.

Is betting on the metaverse worth losing all this money? It remains to be seen… At this point, the decline in Meta’s enterprise valuation since last September is astounding. 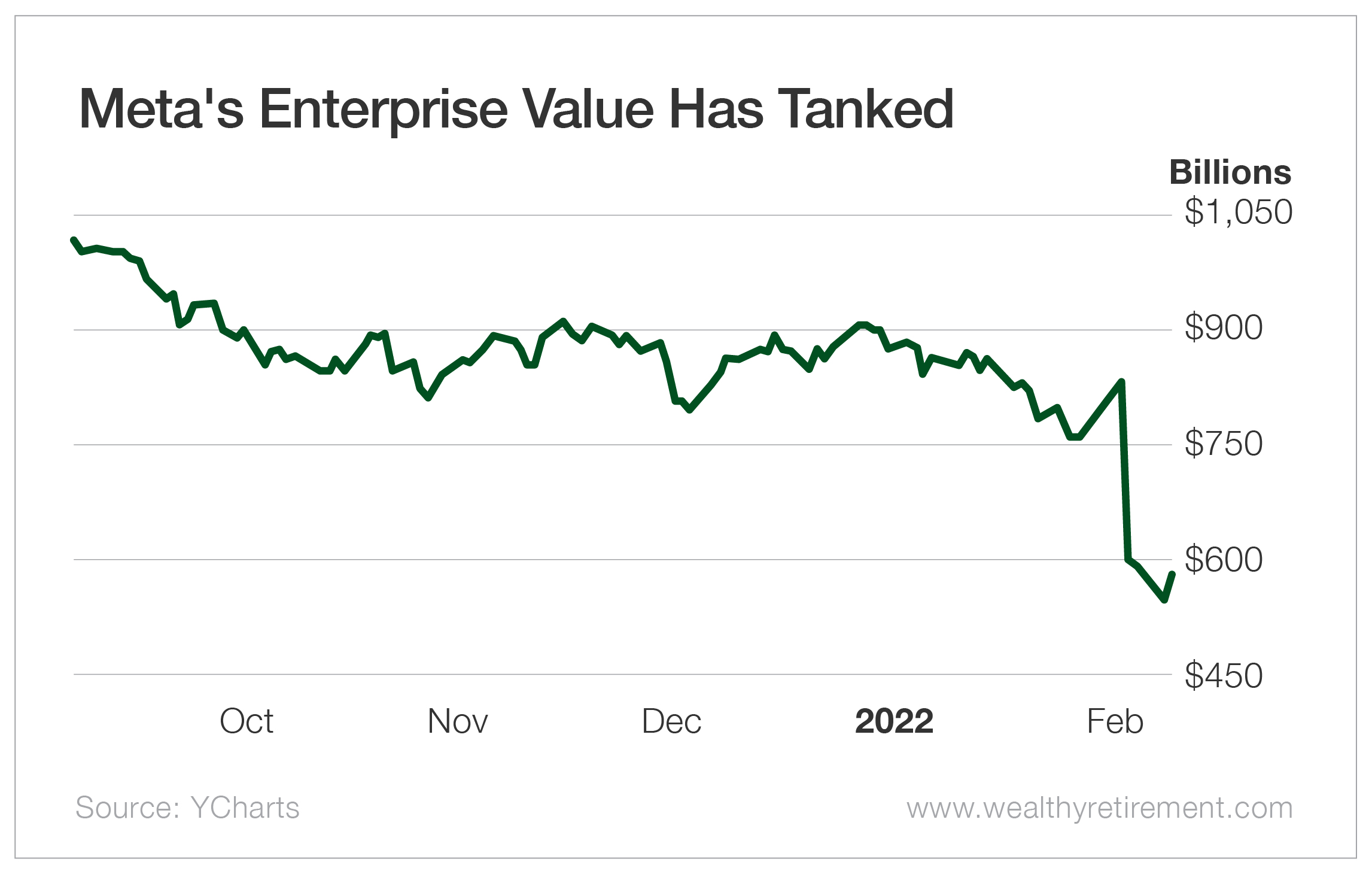 This business, valued by the market at $1 trillion only a few months ago, is now valued at $583 billion.

The $417 billion that has been shaved from Meta’s enterprise value is larger than the entire GDP of Norway.

Which begs the question…

Does this huge loss in enterprise value represent a good deal for investors looking to take a position in Meta Platforms?

The numbers in Meta’s financial statements are a sight to behold.

What has been built here in less than two decades is hard to believe.

That means the business is also massively profitable.

Meta is a cash-gushing juggernaut.

And, of course, I can’t forget to mention Meta’s completely debt-free balance sheet that is loaded with $50 billion in cash and short-term investments.

In the fourth quarter of 2021, an astounding 3.59 billion people used at least one of the company’s “family of apps,” which includes Facebook, Instagram, Messenger and WhatsApp.

You would think an extraordinary business like this would carry a rich valuation.

But after the 40%-plus decline in Meta’s shares, today, investors can buy shares in this dominant business for a valuation that is cheaper than the overall market.

Now, I realize that Meta’s growth is slowing, but there’s no way that it should be trading at a discount to the overall market.

After all, the company is still growing its revenue!

It’s worth noting that Meta’s earnings were hurt last year by the $10 billion loss that the company took from investing in the metaverse.

If I add that cash back to Meta’s earnings, the P/E ratio drops to just 13, which is extremely cheap.

Now, I’ll admit that I don’t know what to think of the fortune being spent on the metaverse and the massive pivot the company is making.

But at this valuation, Meta is a complete steal…

This is a business that has a user base that is literally half the people on the planet.

The stock could decline further in the short term, but I think in the medium to long term, right now is your chance to nab a great entry valuation.

An 8.4% Yielder With a Steady Dividend Safety Rating

Small Caps Are Poised for a Run