Unfortunately, for the vast majority of such companies, this isn’t the case.

It isn’t that publicly traded companies don’t use share repurchases.

The problem is that they misuse them.

First, is the balance sheet strong?

If not, excess cash should go toward strengthening the company’s financial position, not toward share repurchases.

If the balance sheet is strong, a manager can head on to the second question…

Are the company’s shares trading at an attractive valuation?

If the answer is yes, then share repurchases can be a very good use of company cash.

If the answer is no and shares are not attractively valued, then repurchasing expensively valued shares would be a terrible use of cash.

Yet almost across the board, publicly traded companies do the exact opposite.

When business is good and share prices are high, companies buy back shares by the bucketload.

Then, when an economic downturn arrives and shares are available at terrific bargains, we see time and again that share repurchase plans are put on hold.

Let me give you a real-life example…

In 2014, with oil prices high and its share price averaging $124, oil and gas major Chevron (NYSE: CVX) backed up the truck and repurchased a whopping $4.4 billion worth of shares. 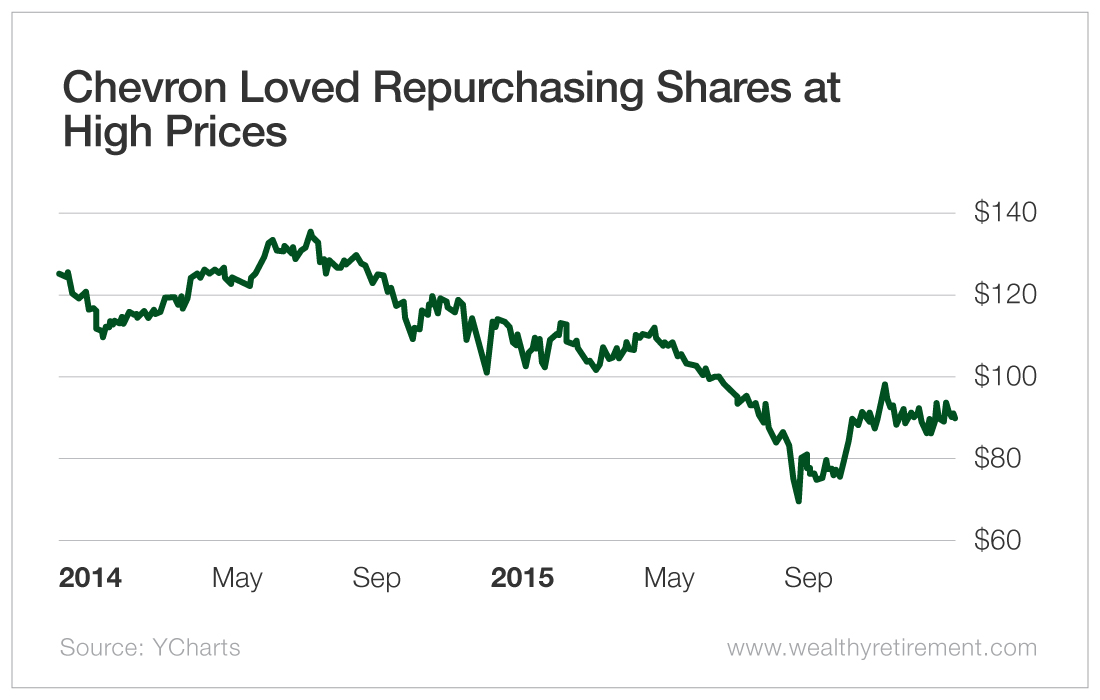 It bought aggressively and used up cash during booms.

Then, when a proper buying opportunity arrived, it had no cash and had to shut down its share repurchase program completely.

I’ve singled out Chevron, but I’m willing to say that the vast majority of share repurchases are being completed with little to no attention being paid to whether the valuation of the shares is attractive.

Just look at what is happening in the market today.

In the third quarter of 2021, it’s estimated that total buybacks by S&P 500 companies are going to hit a quarterly record of $224 billion.

These companies are repurchasing shares when the market is at all-time highs – when even the Federal Reserve is warning that stocks are dangerously expensive.

Companies should have been repurchasing during the second quarter of 2020, after the stock market had plunged and valuations were as low as they had been in a decade. But instead, S&P 500 share buybacks collapsed to just $89 billion.

It’s disappointing to see such widespread misuse of share repurchases by corporate America.

But there is one company doing it right.

Brighthouse Financial Is Buying Back Shares Hand Over Fist

Brighthouse Financial (Nasdaq: BHF) is one of the largest providers of life insurance and annuities in the United States.

It traces its roots all the way back to the launch of The Travelers Insurance Company in 1863.

Given that this business has been around for 160 years, it clearly has staying power!

The Brighthouse Financial of today was spun off from the much larger MetLife (NYSE: MET) in August 2017 for multiple reasons.

As often happens when a company is spun off from a parent company, Brighthouse shares sold off hard immediately after the transaction was completed.

Brighthouse shares have yet to recover.

Since the spinoff, Brighthouse shares have been trading at a progressively larger discount to book value per share.

Book value is the value of a company’s total net assets. 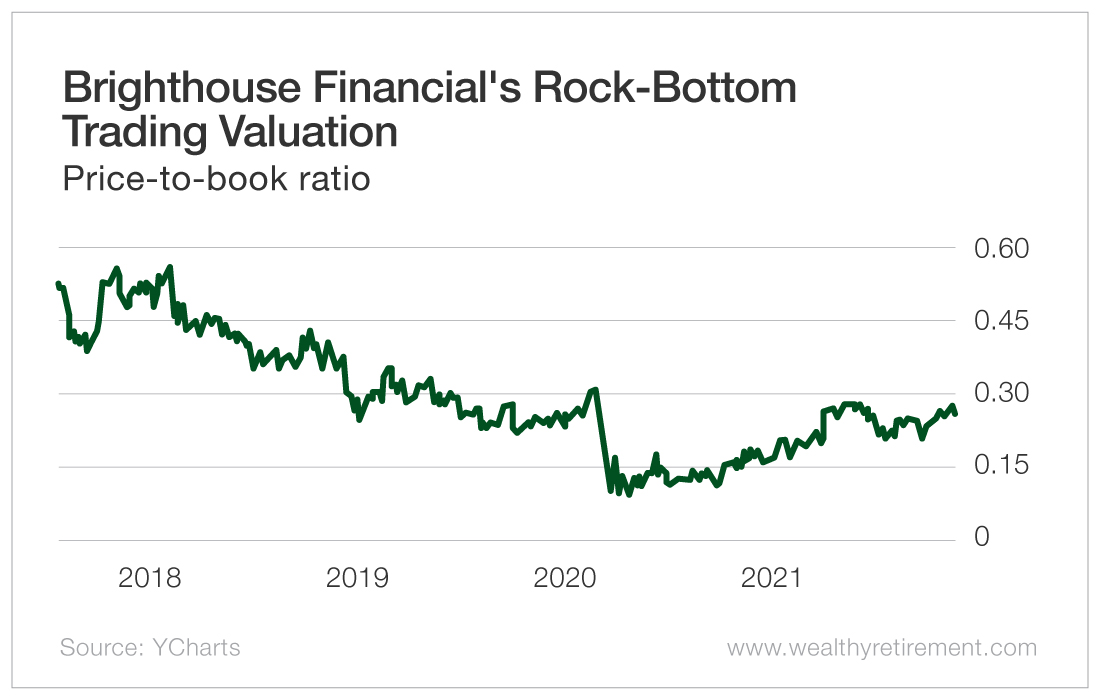 The company’s leadership group has been taking advantage of this discounted valuation by buying back shares as fast as cash allows.

From the start of 2018 through today, Brighthouse has reduced its total share count from 120 million to less than 80 million – an incredible 33% decrease.

At this pace, in six years, there won’t be any shares left outstanding! 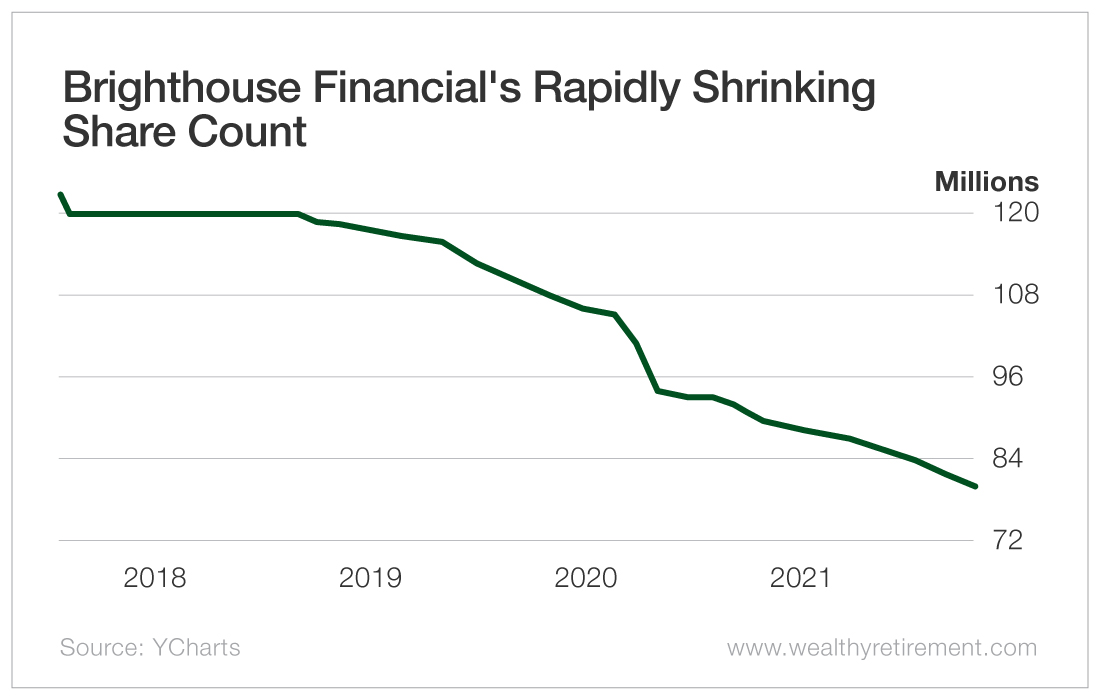 Repurchasing shares at a steep discount to book value is accretive to shareholders.

We can see that through the fact that these repurchases have helped drive Brighthouse’s book value up from $120 per share to more than $175 per share.

As the share count declines, existing shareholders own larger pieces of the remaining pie.

When the stock price starts trading more appropriately and falls closer to book value, shareholders are going to be rewarded generously.

Brighthouse just authorized another $1 billion of buybacks, so management seems intent on taking advantage of the stock’s valuation disconnect until it corrects.

The Secret to Supercharging Your Trades