A Hard Truth for Tesla Investors

Editor’s Note: Today, Contributing Analyst Jody Chudley is sure to ruffle some feathers…

He’ll explain why one of the hottest stocks on the market today is nothing more than a gamble.

And not even a profitable one at that…

But if you want to turn the tables on this loaded market, you won’t want to miss this.

Our friend Andy Snyder at Manward Press has developed something unique…

Tune in for his special Super Trader Rally on September 2 at 1 p.m. for the details…

Including why he expects you could see 20 double-digit gains within two years.

Tesla (Nasdaq: TSLA) is the most overvalued stock on the market today.

And I can prove it…

Tesla’s market valuation – relative to what the underlying business has actually accomplished – has gone from absurdity to outright madness. 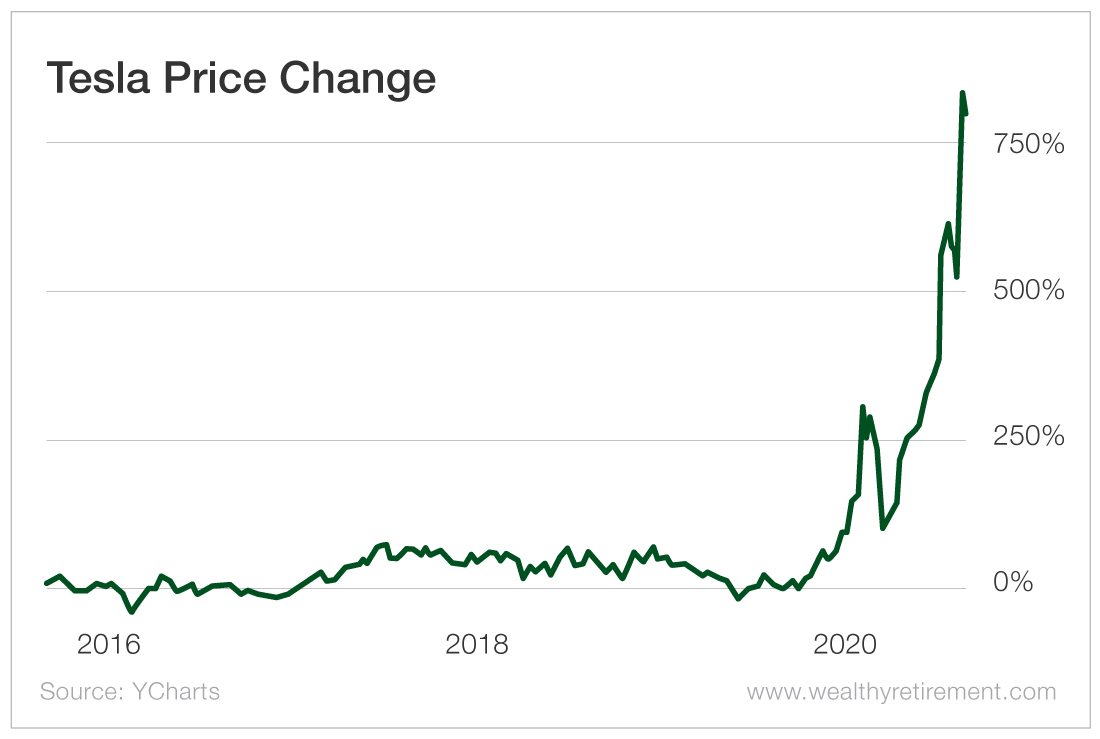 There is nothing fundamental going on at this company that merits this in 2020.

Since that announcement on August 11, shares have surged another 50%.

But stock splits don’t add any value. All they do is double the number of shares a stock has outstanding and cut its share price in half.

A stock split doesn’t help the business generate earnings in any way – and help generating earnings is something Tesla needs.

This will end badly for people buying shares today.

With Tesla now over $2,000, the company has the ninth-largest valuation of any stock listed in the United States.

That means it is more richly valued than 492 out of the 500 stocks in the S&P 500 Index… and the S&P 500 includes the most profitable businesses on the planet.

For perspective, consider that at the stock’s current price, the market values Tesla as worth almost $380 billion.

That is $10 billion more than Walmart‘s (NYSE: WMT) valuation.

After all, over the past 12 months, Walmart has posted net income of $17 billion per year.

Meanwhile, Tesla just managed to squeak out its first 12-month period of profitability.

And even that small profit was built on smoke and mirrors.

The truth is, despite Tesla having a $380 billion market valuation, its business still doesn’t really make any money…

The unbelievable news? Tesla actually reported earnings instead of a loss.

More specifically, with its second quarter earnings announcement that revealed a $104 million profit, Tesla had notched four consecutive quarters of positive earnings for the first time ever.

But hold your horses…

Tesla’s financials reveal a much less impressive set of numbers.

The truth is, the only reason Tesla was able to post any profits is because it has been selling regulatory emissions credits to other carmakers.

In the first half of this year, Tesla recorded $782 million of these sales, virtually all of which went straight to the bottom line as profits. 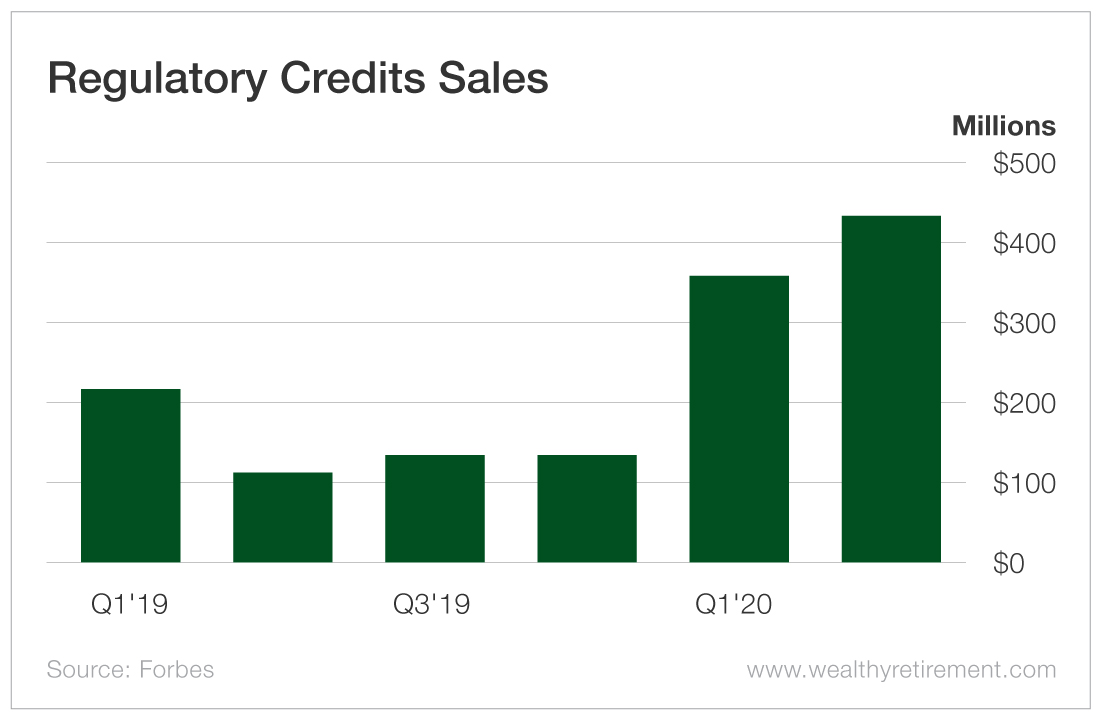 Take away those emission credit sales, and Tesla’s recorded $220 million profit year to date turns into a $500 million loss.

Against the same quarter in 2019, Tesla’s car sales are actually down 5%.

When Reality Hits, Expect a Collapse

Automakers buy emissions credits from Tesla so that they meet government emissions standards.

As those other automakers grow their own clean energy businesses, they will no longer need to purchase credits from Tesla.

When that happens, Tesla’s only current source of profits will disappear… and that won’t do good things for its share price.

But automakers are already aggressively scaling up…

Electric vehicle (EV) production targets for other automakers include…

Tesla’s market for emissions credits is evaporating rapidly. As that source of income dries up, the lack of profitability will come to light.

Tesla’s current $380 billion market valuation is based on massive assumptions about future success that are highly unlikely to come true.

At this point, we don’t even know whether this company will ever generate a profit manufacturing electric cars.

That makes Tesla the most overvalued stock in the market today… and perhaps ever.