As the financial crisis unfolded in 2008 and Wall Street collapsed, Steve Eisman loved every minute of it.

Eisman was one of the main characters portrayed in the Michael Lewis book The Big Short.

The book (and the Oscar-nominated movie) focused on the handful of brilliant investors who scored windfall profits by betting against Wall Street before the housing bubble burst.

Eisman is and always has been a maverick. For decades, he considered himself an outsider because he found how most of Wall Street operated to be distasteful. He is a man obsessed with honesty and integrity in a world where people have little of either.

For instance, Wall Street created the housing bubble. That is why Eisman so thoroughly enjoyed profiting from the pain it experienced as the bubble unwound.

That Wall Street has gone down because of this is justice… They built a castle to rip people off. Not once in all these years have I come across a person inside a big Wall Street firm who was having a crisis of conscience.

But Eisman hasn’t just been an enemy of the Street – he’s also been an ally to average investors from the start.

At one point early in his career while working as an analyst at Oppenheimer, he was pressured by his Wall Street bosses to put out a positive review on a particular company.

Instead of toeing the company line, and against his employer’s wishes, Eisman did something foreign to Wall Street: He told the truth. Instead of pumping the company, Eisman wrote what he believed, saying in his report that the company was worthless.

And he was right. The company went bankrupt within a year.

It was this same contempt for dishonesty that led Eisman to uncover the disaster that loomed from the toxic mortgages sitting on the balance sheets of Wall Street banks in 2008.

Which is why I find what he is saying now so hard to ignore.

Late in April, Steve Eisman was interviewed by CNBC.

During that interview, his exact words were…

I actually think long-term, the best cyclical plays out there are the very large banks.

(If that opinion of the big banks sounds familiar, it is because you heard something very similar from me a few weeks ago.)

During the last crisis, Eisman scored windfall profits by betting against the big banks. In this crisis, he is betting on them – which speaks volumes.

Which begs the question…

Why does a man who hates the big Wall Street financial firms think they are the best investment available today?

During his discussion with CNBC, Eisman told us…

Post the great financial crisis of 2008, the regulatory apparatus spent years working on the banks… the banks were forced to de-lever and to wield multiples more liquidity. Now that we have a second crisis, the banks are fine.

I agree with him. The balance sheets of the big banks have never been in better shape.

During 2008 and 2009, all bad assets were written off. Banks raised additional capital, and since then, they have been scrutinized by regulators.

For example, just look to Citigroup (NYSE: C). In 2008, Citigroup had a leverage ratio (debt-to-equity) of 35-to-1, compared with just 10-to-1 today. The lower ratio today makes the bank much more stable.

In addition to the lower leverage ratios, I believe that the asset values on the big banks’ balance sheets have never inspired more confidence.

In 2008, the big banks caused the financial meltdown. This time around, they are in terrific financial shape and are going to be a key to help us get through the COVID-19 crisis.

Their stock prices have also become very cheap. The entire sector has sold off hard in 2020, with some of the biggest banks down almost 50%. 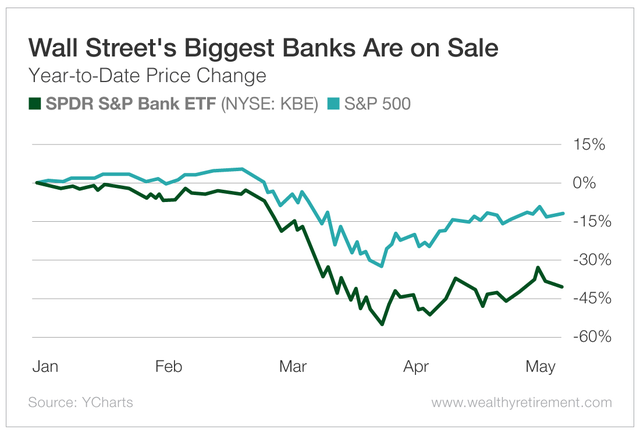 Despite carrying one-third of the leverage and holding much better quality loans today, some of the big banks are trading at share prices similar to where they were a decade ago.

To be clear, earnings for the big banks are going to take a hit in 2020. We witnessed that with the release of first quarter earnings, where all of the banks reported large additions to their loan loss reserves.

With our economy just starting to reopen, there will unquestionably be more loss reserves taken in the second quarter.

That is okay. The banks’ balance sheets can handle it.

When we get to the other side of COVID-19, we are going to find that the long-term earnings power of the big banks has not been impacted.

When the market figures that out, the stock prices of these companies will move a lot higher to reflect that fact.

That is why Steve Eisman, a man who despises the big banks and has proven his loyalty to small investors, thinks those banks are the best place to invest today…

And why I do too.

Is This Oil Giant’s 33-Year Dividend-Raising Streak About to End?