Every day when I turn on the computer, one of the first things I do is go through my stock charts. I like it more than a kid likes Christmas morning (maybe because I received too many lumps of coal from Santa).

The world is full of potential as I view the various setups and consider how I’m going to approach a trade.

As I mentioned last week, I use technical analysis – the study of stock charts – to make sense of all of the price data that bombards traders and analysts every second of the trading day.

Analysts can make technical analysis incredibly complicated, and they often do. The exams I passed that were given by the Market Technicians Association (now the CMT Association) had some pretty complex stuff that I studied for hours.

But the truth is, I don’t use 90% of it. What I find most useful when analyzing stock charts is pattern recognition.

Today, I’ll go over some simple but very effective patterns that you can easily identify and trade very profitably.

In last week’s article, I discussed trend lines. They are probably the easiest pattern to understand. A trend in motion tends to stay in motion. And you follow that trend higher (or lower) until it breaks.

In an uptrend, you draw a trend line from two low points where the second low is higher.

For a downtrend, you see the opposite – two high points where the second high is lower.

These trend lines offer good spots to buy or sell your stock. When the stock is close to the trend line, you buy (in an uptrend) or sell (in a downtrend).

If the trend breaks, the stock is likely to move in the opposite direction or at least stop going in the prevailing direction.

The first is the bull flag, or pennant.

It starts with a sharp move higher (the flagpole), then consolidates for a short period. Once it breaks out of that consolidation, it typically moves higher by the same distance as the flagpole. 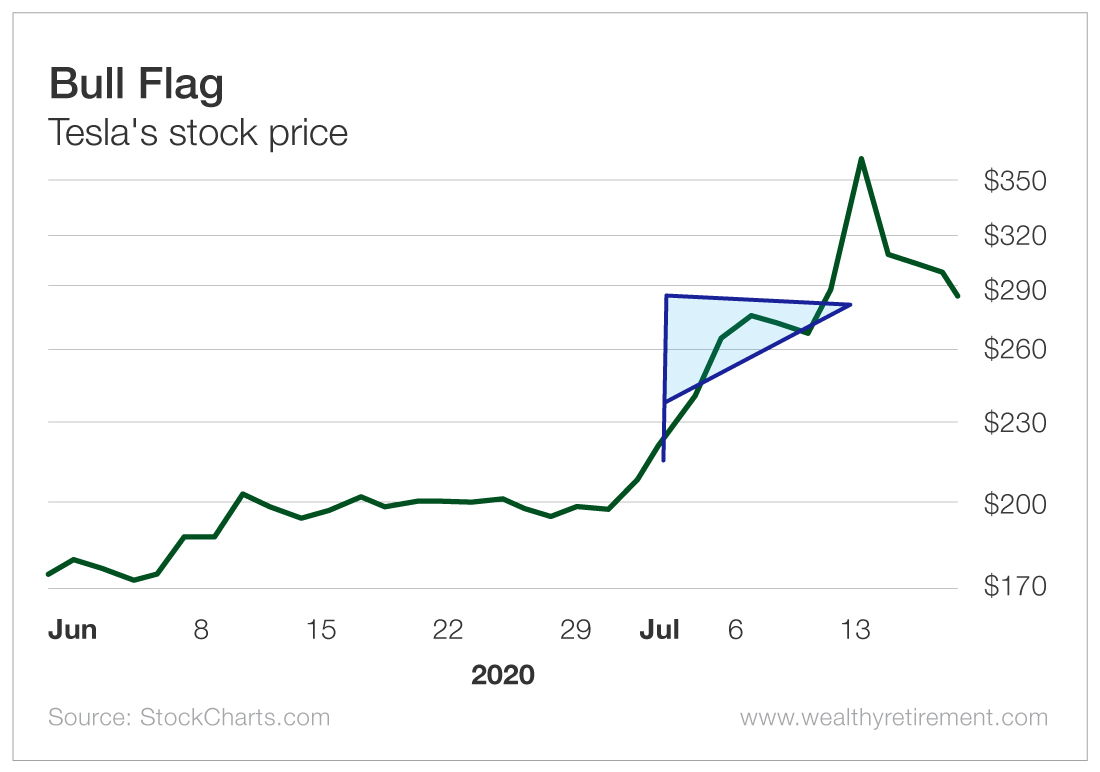 The Head and Shoulders

The head and shoulders is another reliable pattern. It is bearish.

It features three high points. The second, or the head, is the highest. The third, or the right shoulder, occurs on lower volume. Failure to hit a higher point than the head on lower volume suggests that buying interest is drying up. 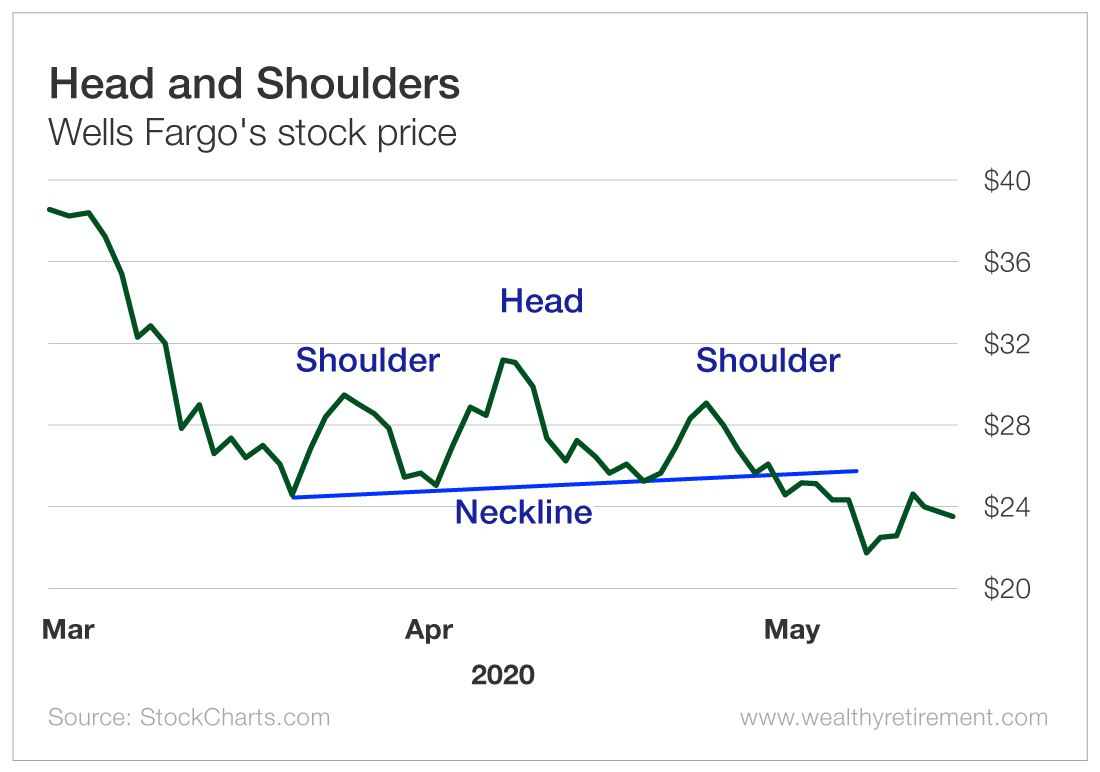 The flip side of that is called a reverse head and shoulders pattern, and it is bullish.

The Reverse Head and Shoulders

You can see on the chart below how CrowdStrike Holdings (Nasdaq: CRWD) had a small dip early in the year, a large drop (which was the head) in March and then another small decline in April on lower volume, which suggested the sellers were done.

Once it broke the neckline, it went much higher. 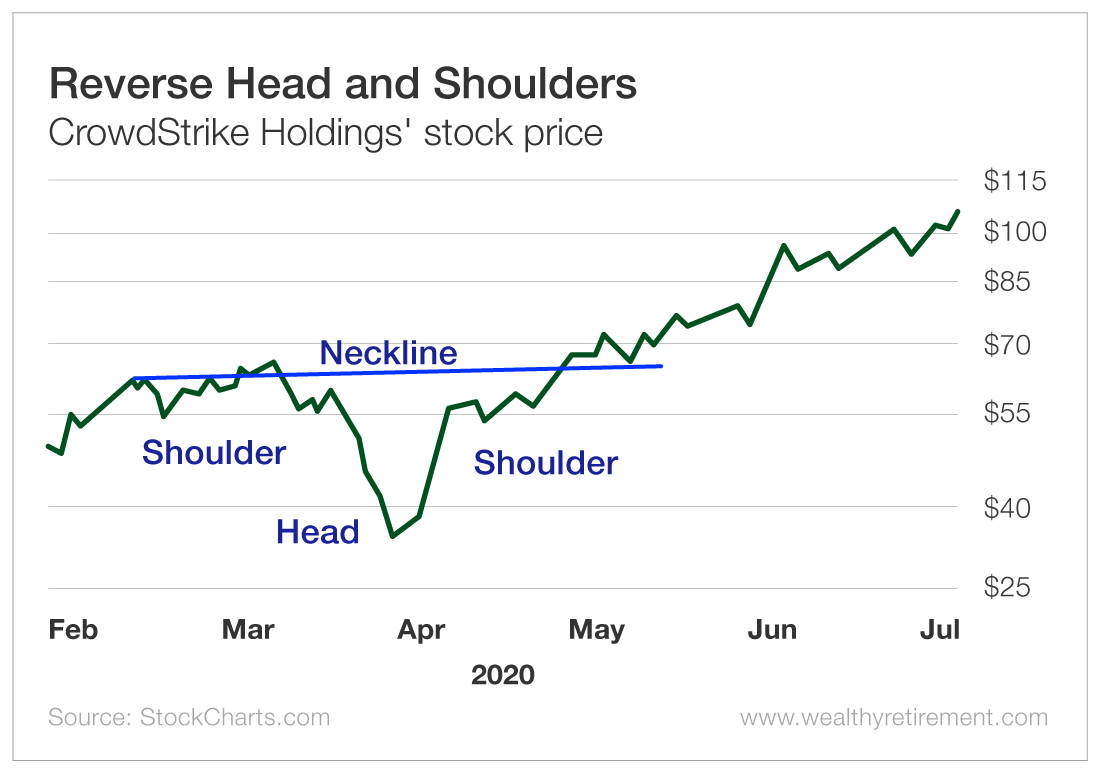 As I always say, charts aren’t a guarantee that you’ll make money. But they’re an excellent starting point for finding stocks that are likely to go higher, and they help you reduce risk by knowing when to get in and when to wait.

I hope your holiday season is filled with nice charts.

Get Safe, Steady Streams of Income With Bonds

A New Rule That Will Hurt Investors

Protect Your Wealth When You’re Vulnerable