I’m just going to go ahead and say it…

Tesla (Nasdaq: TSLA) is the most overvalued stock I’ve ever seen.

After soaring on the news that the company would be added to the S&P 500, Tesla now sports a market valuation higher than Berkshire Hathaway‘s (NYSE: BRK-B). 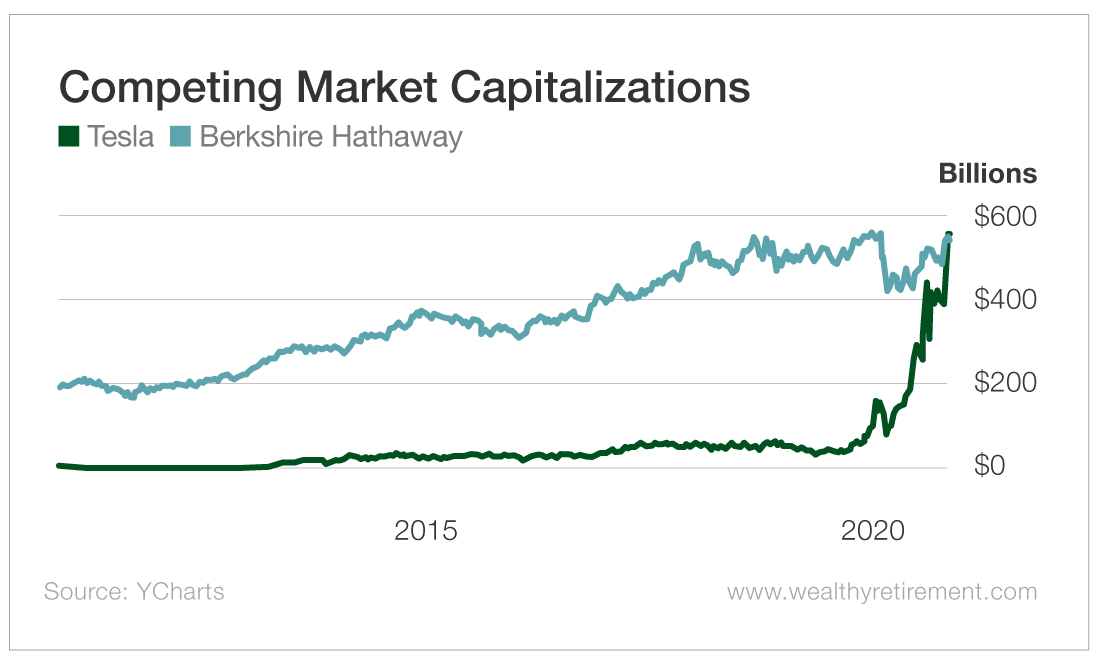 Tesla entered 2020 with a $75 billion market valuation. Now, thanks to a skyrocketing share price, it is valued in excess of $550 billion.

Let me show you how nonsensical that is…

Through the first three quarters of 2020, Tesla had recorded total net income of $451 million.

Let’s think about that number for a second…

If Tesla keeps up its year-to-date earnings pace, the company will record net income of $600 million for the year.

That means the stock is trading at a price-to-earnings ratio of 916.

For perspective, consider that healthy growth stocks usually get valued at around 30 times earnings.

Tesla is incredibly inflated compared with its peers. At 916 times earnings, it is more than 30 times more richly valued!

And Tesla’s valuation is even more expensive than it seems because its earnings are all smoke and mirrors.

The only reason that Tesla has been able to post any profit in 2020 is because it has been selling regulatory emissions credits to other automakers.

Emissions regulations require a certain percentage of cars manufactured to be electric – and automakers need to comply.

So they buy the credits from Tesla.

Tesla has extra credits because the company manufactures only electric cars.

Today, Tesla is able to sell those credits because other automakers haven’t ramped up their electric vehicle (EV) production.

But in the near future, other auto manufacturers won’t need them…

Take those credits away, and Tesla’s $451 million net income turns into a $729 million loss.

Tesla’s EV business, valued at $550 billion in the stock market, is a profitless operation.

In addition to generating $25 billion-plus per year in profits from its core businesses, Berkshire also has a $250 billion portfolio and $150 billion in cash.

It is absurd that these two companies are valued similarly.

Tesla Is Not the Only Electric Car Company

Clearly, a lot of people think that Tesla will make a lot of money someday.

But why assume that Tesla will take such a massive share of the EV market?

Tesla doesn’t have a monopoly on the EV industry.

In fact, the company is facing a lot of competition…

Every major automaker is fully focused on the transition to EVs.

So are other pure-play EV companies that have emerged in 2020.

General Motors (NYSE: GM), for example, is fully committed to an “all-electric” future. It plans to have 30 different electric car models on the road by 2025.

All of the deep-pocketed legacy automakers also have aggressive plans.

Further, even if Tesla becomes a long-term leader in building EVs, who is to say that the company can make a significant amount of money?

Remember, auto manufacturing is a cyclical industry. It has a history loaded with bankruptcies among even the largest players.

Even if Tesla is the No. 1 EV maker five years from now, there is no guarantee that it will generate significant profits.

I find it very hard to believe that Tesla would ever be able to make enough to justify a $550 billion valuation.

Yet people buying Tesla today are betting that its shares deserve to go even higher.

Owning shares of Tesla at this valuation isn’t investing. It is speculation. And that isn’t what we do here at Wealthy Retirement.

Taxes Are Going Up… Here’s What to Do About It

Which Stocks Will Be the Big COVID-19 Winners?