The last time the U.K. had an economic decline larger than it had last year, there were no bicycles, telegraphs or mercury thermometers.

The United States had not even been founded.

It was an extraordinarily cold winter across all of Europe – the coldest winter of the 500 years prior.

Trade across the entire continent was brought to a stop as the sustained arctic blast froze trade routes.

Because there was no weather forecasting at the time, everyone was caught unprepared. Inhabitants of many cities were forced to burn furniture to stay warm.

Crops couldn’t survive the frigid temperatures and were ruined. Livestock froze to death in their barns, pens and coops.

The winter hit France particularly hard, and the subsequent famine caused an estimated 600,000 deaths by the end of 1710. Due to frozen waterways, Paris remained cut off from supplies for three months.

In the U.K., when the thaw finally came, it brought another catastrophe: widespread flooding.

The freezing and then flooding devastated the U.K.’s agriculture-based economy. The price of grain soared 600%, and many communities faced starvation.

That is larger than the 9.9% decline that rings in as the final figure for 2020. 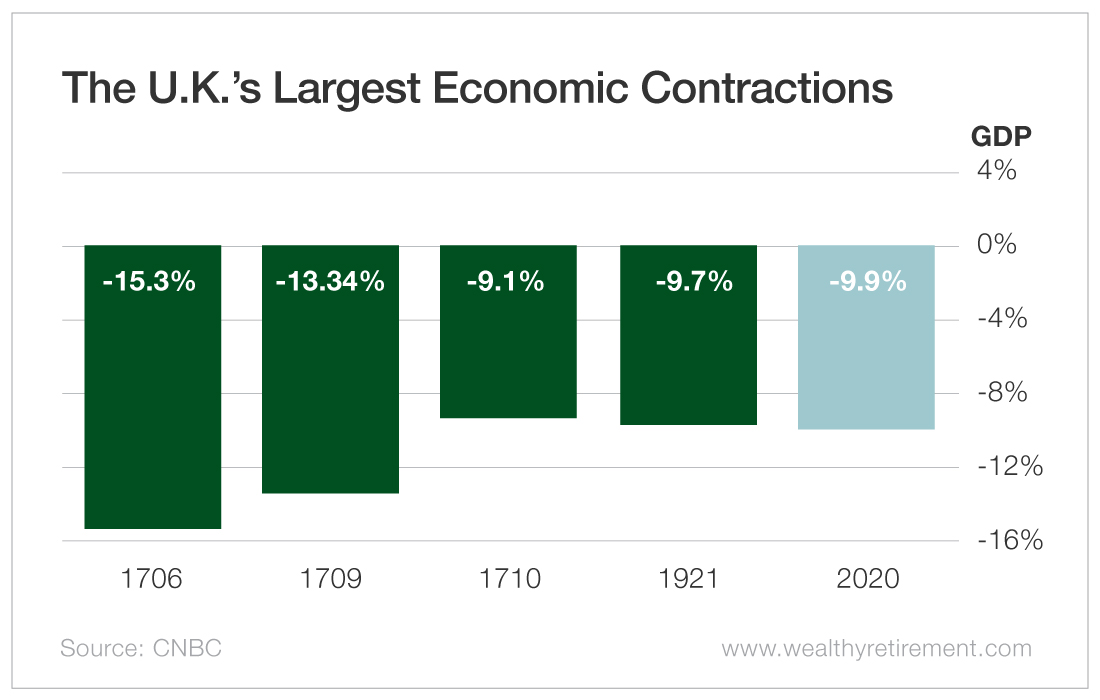 For perspective, consider that over those 300-plus years, the U.K. has gone through…

Over three centuries, the U.K. has gone through some trying times.

For stock market investors, there is a lesson here…

It pays to buy stocks when things look bleak.

And it is a terrible idea to bail on the market when the going gets tough.

Always remember, if you are a patient long-term investor, the stock market is rigged in your favor.

Yes, there will always be unexpected and scary blips along the way.

But over the long term, the stock market just keeps marching higher…

Even through the worst economic hit since 1709.