But Contributing Analyst Jody Chudley uncovered one last April – and recently, I checked back in with him to find out whether one high-flying sector still has room left to run.

On April 14 of last year, Jody wrote, “There has rarely been a better time to buy small cap stocks.”

On the tail of a horrific first quarter, small cap stocks – represented by the Russell 2000 Index – were down nearly 31%, the largest quarterly loss in the index’s history.

But given the spectacular recoveries these stocks posted following bottoms in 2002 and 2009, Jody was confident the Russell 2000 posed a remarkable buying opportunity.

One year later, the market has proven Jody right… 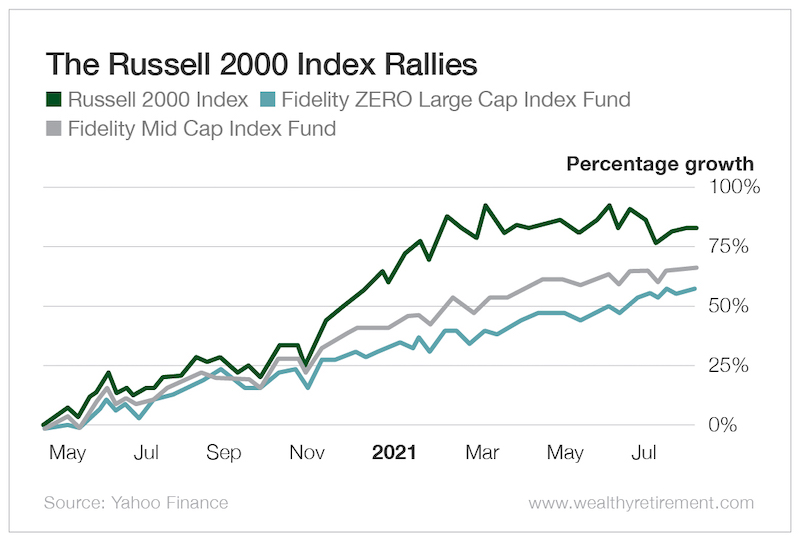 Investors who got in on the Russell 2000 immediately following Jody’s bullish call are up a staggering 82%.

Small caps are known for their ability to make outsized moves compared with those of the broader market, a phenomenon known as the “small cap premium.” This is because small caps are more sensitive to economic change than their larger cousins.

For example, take the iShares Russell 2000 ETF (NYSE: IWM), one of the funds Jody suggested for playing this trend in small caps. It has a beta of 1.27, meaning that it is 1.27 times more volatile than the S&P 500 – and therefore 27% more likely to move based on macro events.

But even without the help of a recovering economy, several variables, like strong management, inflation expectations and even discounted valuations, have helped small caps prosper in a difficult business environment.

While small cap stocks’ sales took a bigger hit as a result of COVID-19, these companies did a much better job of cutting costs than larger companies, a feat reflected in higher earnings per share estimates.

Additionally, their lower debt levels make them less susceptible to interest rate changes, while their smaller size means that stimulus funds have a more pronounced effect.

But most notably, small caps tend to outperform during periods of increased inflation. According to the CME Group, the ratio of the Russell 2000 to the S&P 500 has tracked along with inflation expectations for more than a decade. 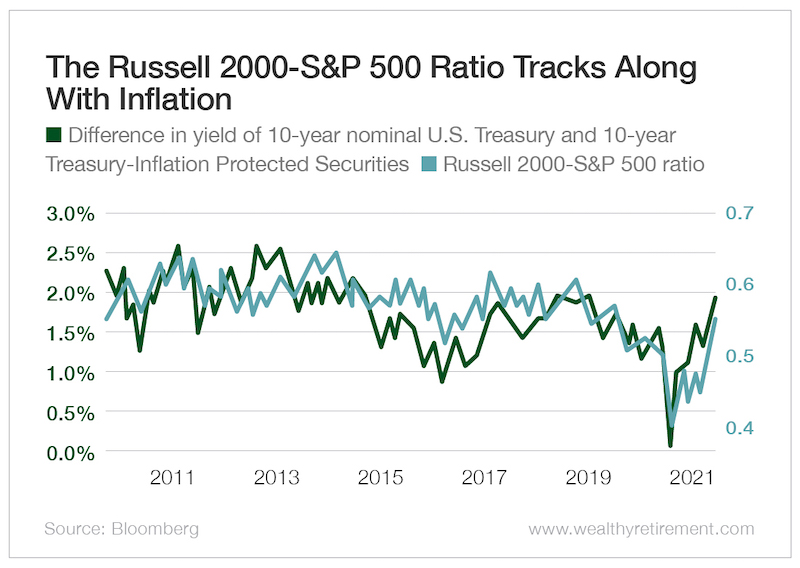 Some experts even believe that small caps’ lower price-to-book ratios, in making them more akin to value stocks than growth stocks, also position them to benefit from the market’s shift out of growth and into value.

This places small cap stocks at the center of various tailwinds striking the market and fueling growth. But can the outperformance continue?

This March, market heavyweight Morgan Stanley downgraded small caps, doubtful that they could maintain their rally amid a reopening economy and fears about COVID-19 variants.

Jody wrote in a recent note…

This has been an incredible trade. The bad news is that when an entire sector of stocks has this big of a move, the value proposition that it offers changes. While stock prices have nearly doubled, earnings for the entire sector most definitely have not.

That means valuations for small caps have become a lot more expensive.

The Russell 2000 Index now trades at more than 30 times estimated earnings, which is 25% higher than it has been on average since 2007.

For better perspective, consider that as of today, the Russell 2000 has been more expensive only 8% of the time since 2007.

Last spring, the small cap sector represented an incredible bargain. Today, it does not. There are still bargains to be found, for sure, but the average small cap is no longer attractively valued.

Space is filling up on the small cap bandwagon, and these stocks are no longer the “no-brainer” buy that they were last April. If you followed Jody’s lead and explored small caps last spring, now may be a good time to take profits.

But when one door closes in the markets, another one always opens…

Don’t Get Burned by This Company’s Deceptive Market Valuation

Save Big on Taxes Using This REIT Deduction