Bitcoin has a very dirty secret – one that could ultimately pop the Bitcoin bubble.

Bitcoin is bad for the environment.

Recent analysis from Cambridge University shows that it requires a staggering amount of electricity to mine Bitcoin.

Miners are rewarded in Bitcoin for their efforts.

What you do need to understand is that the more Bitcoin is mined, the more complex the algorithms that must be solved to get a Bitcoin become.

This creates a need for an increasingly enormous amount of computer horsepower and electricity.

Consider this for perspective…

There are 195 countries in the world.

Mining Bitcoin already consumes more energy than 160 of them do separately. 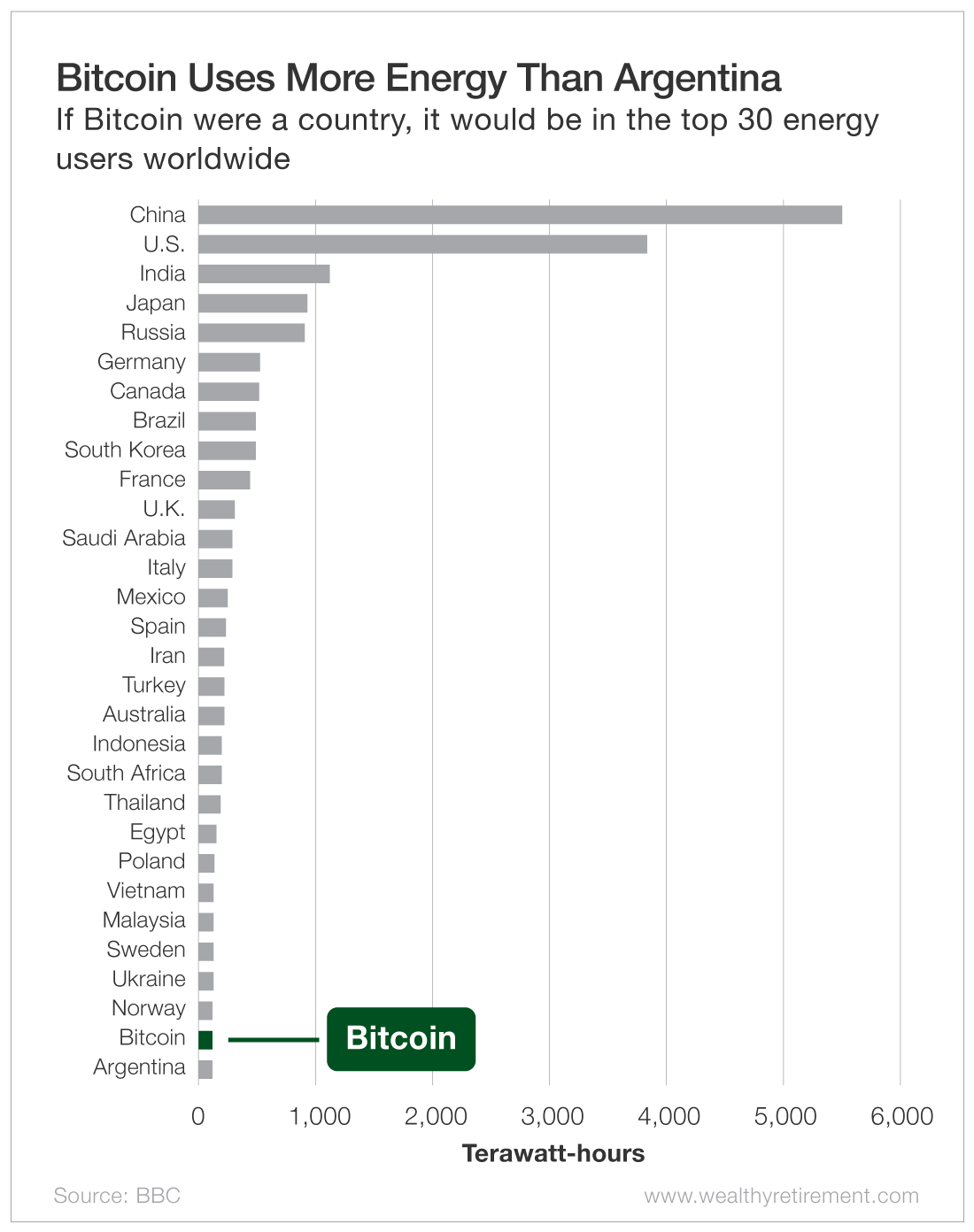 The Cambridge study shows that currently, Bitcoin mining consumes more energy in a year than entire countries like Switzerland and Argentina.

It is an escalating energy consumption concern.

And the higher the price of Bitcoin goes, the more incentive there is for miners to try and earn some of it.

That drives miners to string together more and more computing horsepower – and consume more and more electricity – as they run their high-powered computers day and night.

The bigger Bitcoin gets, the bigger its environmental footprint becomes.

And the source of the electricity behind much of Bitcoin mining makes matters even worse.

Almost two-thirds of Bitcoin mining happens in China, where the main source of electricity is coal – the dirtiest power source.

As you can imagine, due to energy consumption that outpaces that of most countries on the planet, environmentalists are targeting Bitcoin.

They view Bitcoin as a huge waste of resources and a growing problem for the climate.

And remember, the green movement is no longer something that just Greenpeace is going to be involved with in the coming years.

The people have spoken, and elected officials across the globe have gone all-in on fighting climate change.

It’s now a leading issue for the largest countries in the world.

That means environmentally unfriendly Bitcoin isn’t going to find many allies in important policy-setting places for the foreseeable future.

Is this dirty secret what will ultimately cause Bitcoin to crash?

I don’t know. What I do know about Bitcoin is that there is no way to determine what a Bitcoin is worth.

And that is what makes owning Bitcoin 100% speculation and zero percent investing.

And I’m not a speculator. I’m an investor.

A 12% Yield as Reliable as Your Crazy Friend

How to Master Smart Speculation