On March 31, I told you how hedge fund manager Bill Ackman had just pulled off the “trade of the century” by turning a $27 million bet into $2.1 billion in less than a month.

Ackman hit that grand slam by making a bet before COVID-19 hit the United States… a bet that the financial markets would crash.

By the time we learned about his trade, the financial world was falling apart.

And today, Ackman just placed another big bet on a major financial market meltdown happening in the coming months.

But this time, we saw it coming…

Ackman revealed his new bet against the markets at a recent conference.

He said that while his new bearish bet isn’t as big as the wager he placed back in March, the terms of the trade are identical.

Specifically, he believes that the corporate bond market will crash.

So he holds credit default swaps, which are essentially insurance that an investor can purchase for protection against a bond issuer defaulting.

Should We Be Worried?

When I first wrote to you about the Ackman windfall trade, I suggested that his investment vehicle Pershing Square Holdings (OTC: PSHZF) was a terrific bargain.

I couldn’t be happier with how that has played out… 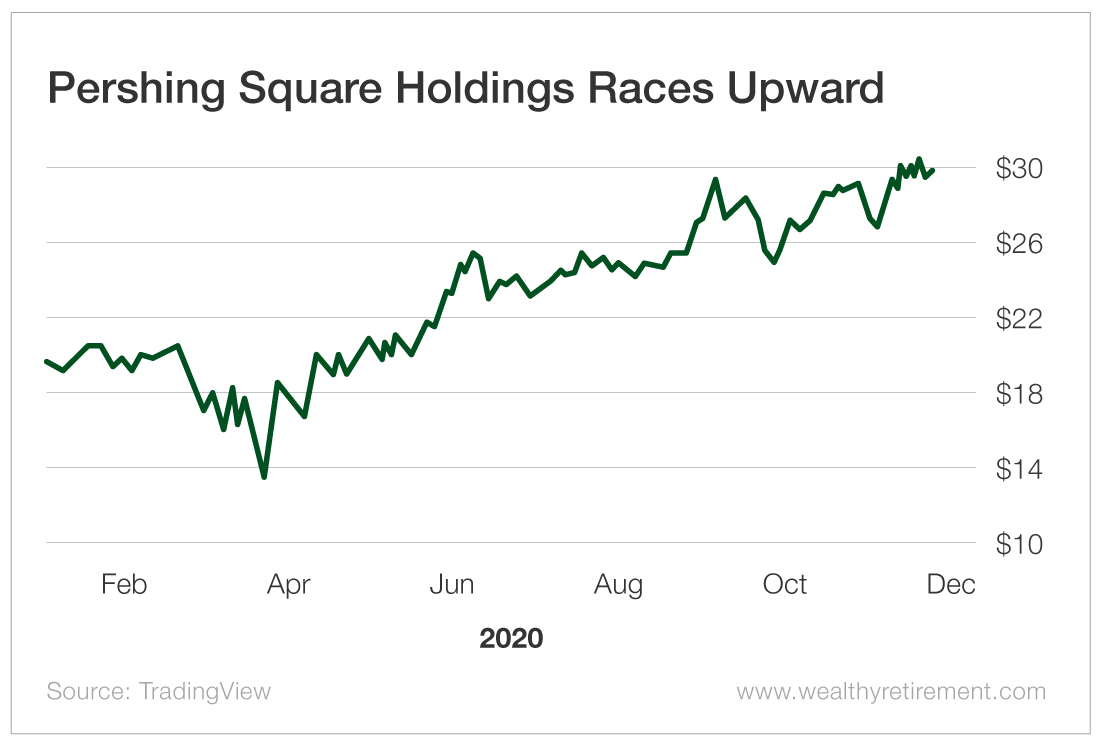 Pershing Square Holdings has outperformed because Ackman tends to make good investing decisions. He isn’t right 100% of the time, but his long-term performance commands respect.

For months now, I’ve been warning about the valuations of certain sectors and companies. The most popular stocks of today are extremely expensive.

In other words, they are ripe for a major correction.

The electric vehicle companies that are all promise and no profit…

And the empty-shell special purpose acquisition companies (SPACs) that are all the rage.

Investors need to avoid buying overvalued stocks like these. Overvalued stocks perform the worst in a market correction because their share prices aren’t supported by fundamental valuations.

Instead, investors should look for value in opportunities like Pershing Square Holdings, which still trades at a huge discount to the value of its assets.

It also gives you the chance to profit from Ackman’s new bet against the markets.

And always remember… Even if Ackman is right and the markets do have a big correction or even a crash, they always recover.

Over the long term, the stock market is rigged in our favor. Despite bumps in the road, the market just keeps churning higher on average by roughly 10% per year.

We don’t win this game by timing the market. We win it through time in the market.

Protect Yourself From Higher Taxes