Last August, I pounded the table on how attractive shares of publicly traded insurance companies were.

I believed these stocks offered what I am always searching for: an “asymmetric opportunity.”

By that, I mean an investment opportunity that is low-risk and high-reward.

I felt that buying shares of insurance companies was like a coin flip, offering only two possible outcomes: Investors would either break even or make really good money.

Since then, this idea has played out well for us… 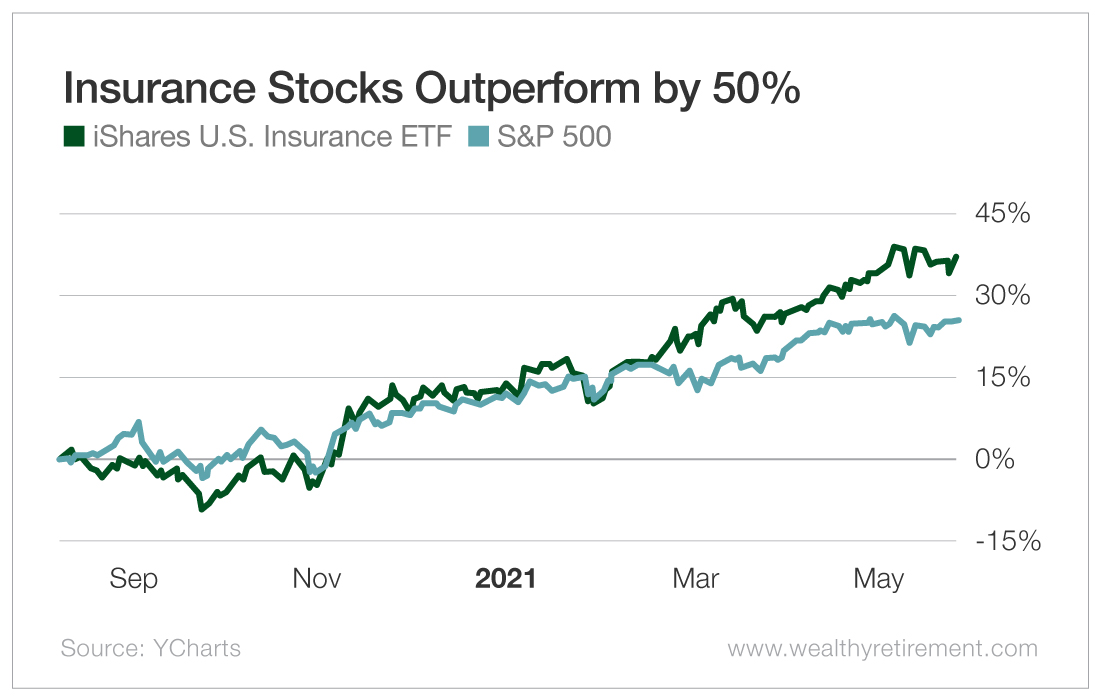 Last August, I felt that our downside was limited because of these companies’ incredibly cheap valuations. Then, some of the biggest and best insurance businesses on the planet were trading for less than 50% of their book value.

These companies were so cheap that they realistically couldn’t fall much further.

The potential upside, on the other hand, was significant.

It was also clear that these insurance stocks had a major catalyst in the pipeline: a move higher in interest rates.

Insurance companies make most of their money from their investment portfolios.

Since most of each investment portfolio goes into bonds, insurance companies’ earnings and interest rates are tied at the hip.

With August interest rates at 5,000-year lows (I’m not exaggerating), there was only one direction that earnings for insurance companies could go.

Since then, interest rates have taken off… 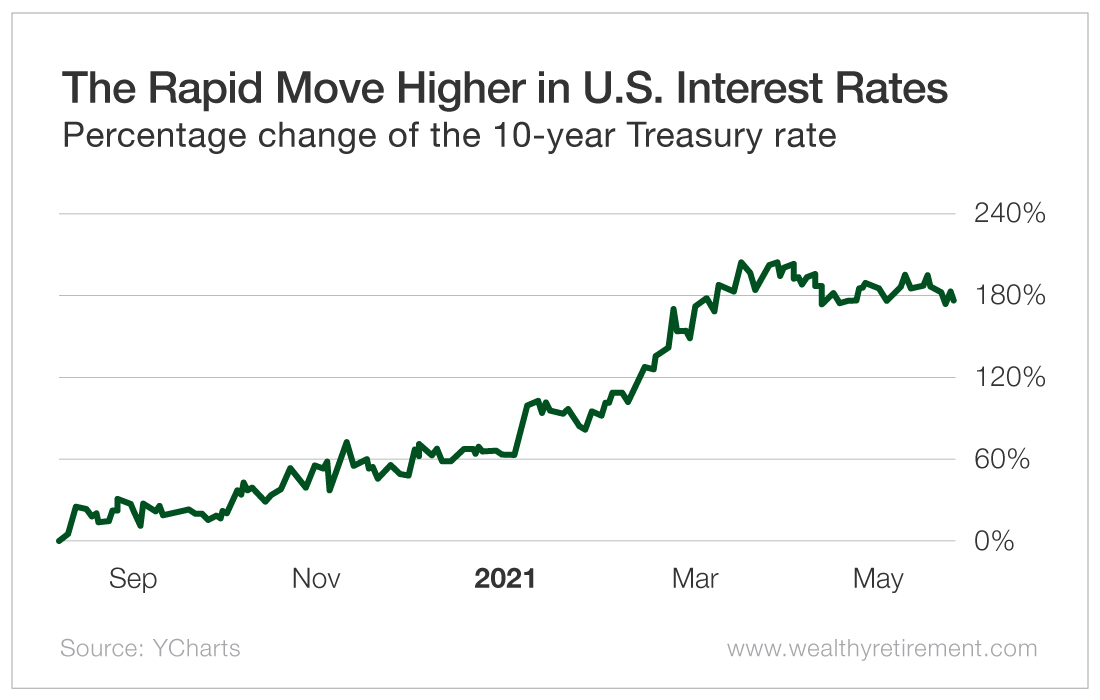 This increase in interest rates is good for insurance companies’ earnings, and it’s why this sector has been outperforming.

I don’t think it is done…

One of the Best Inflation Hedges

Despite soundly thrashing the market in the months since I identified this opportunity, this sector still has upside.

These stocks are still not expensively valued.

They aren’t absurdly cheap like they were in August…

But they are still much cheaper than they should be, trading for sizable discounts to the value of their net assets (book value). 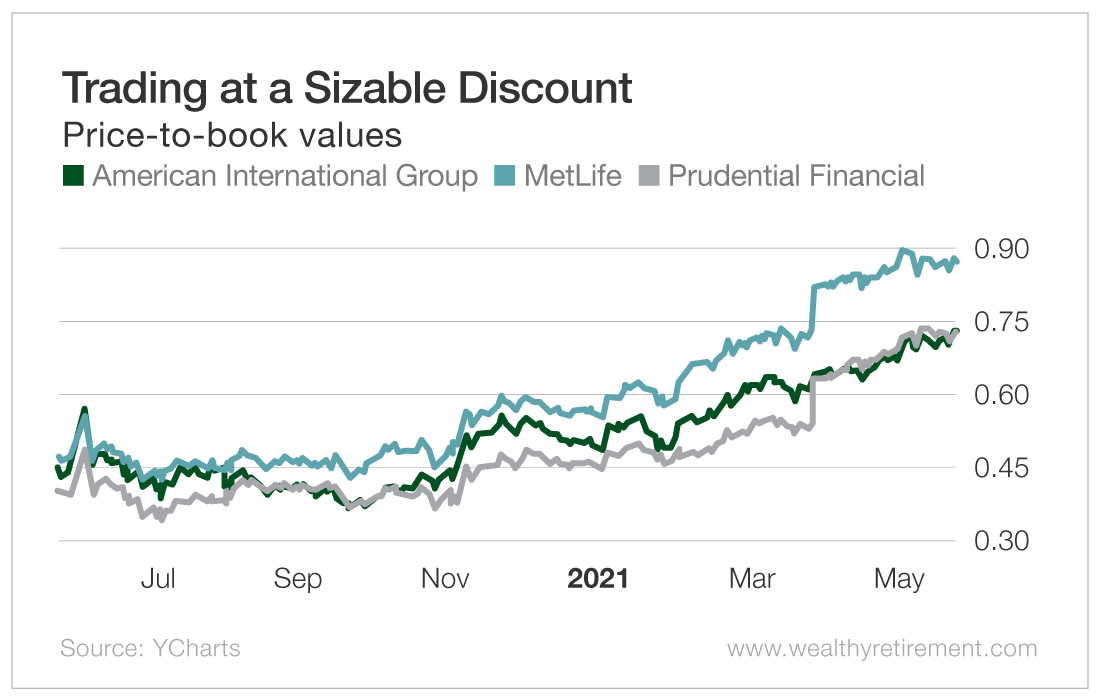 Additionally, while interest rates have had a big move higher, they are still incredibly low relative to where they have been historically.

With people like Warren Buffett now warning that inflation is starting to get out of control, further increases to interest rates are likely.

And those increases could be big…

Check out in the chart below just how minuscule U.S. interest rates still are today relative to the past three decades. 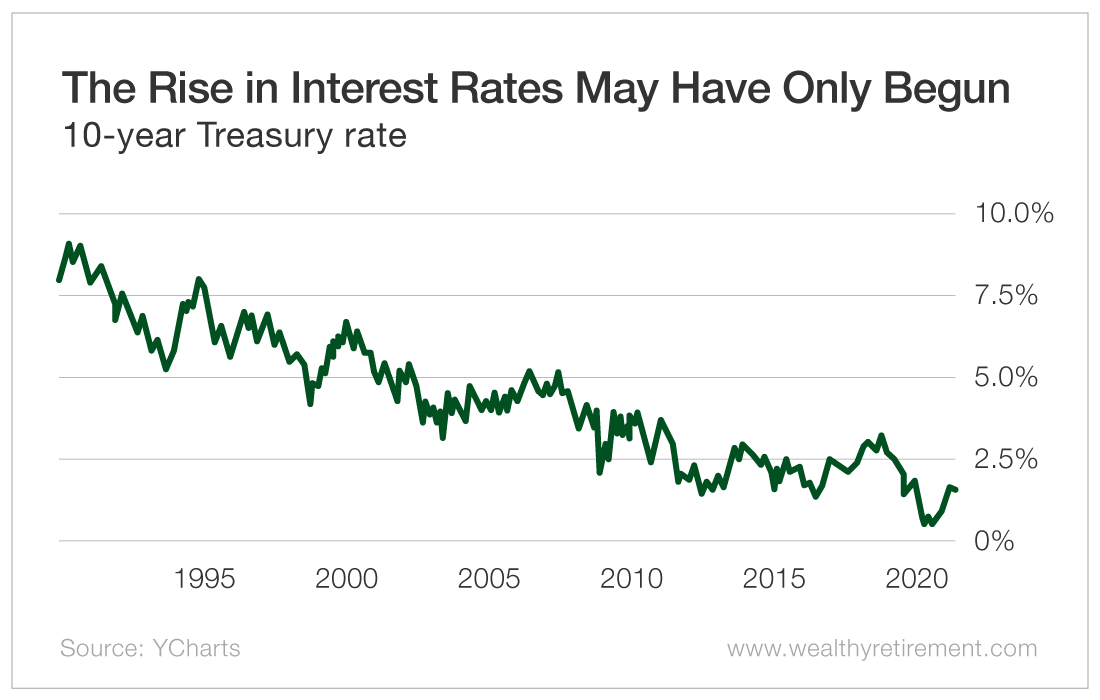 We could easily see interest rates double or triple from where they are today if inflation keeps picking up. Even then, interest rates wouldn’t be high.

Obviously, doubling or tripling interest rates would be bullish for insurance companies’ earnings.

This makes the insurance sector one of the best hedges against inflation an investor can have in their portfolio.

With these stocks still quite cheap and inflation heating up, I still expect this sector to outperform in the medium term.

After all, with prices of everything – like houses, commodities and cryptocurrencies – surging, we really don’t know how bad this uptick in inflation may become.

Central bankers around the world have done an unprecedented amount of money printing. If hyperinflation were to ever appear, the coming months and years would be the time.

If that happens, having a hedge like these insurance companies in your portfolio will be a wise move…

Budget for Financial Peace of Mind