Here is a sentence I never thought I’d write…

Tobacco behemoth Philip Morris (NYSE: PM) has called for a complete ban on cigarettes within the next 10 years!

The call for the ban on cigarettes comes straight from the mouth of Philip Morris CEO Jacek Olczak.

It is quite a statement from a man whose paycheck comes from Big Tobacco.

Thanks to Marlboro (the world’s bestselling tobacco brand) and its various cigarette products, Philip Morris has a market valuation in excess of $150 billion.

It generates close to $30 billion in revenue every year. 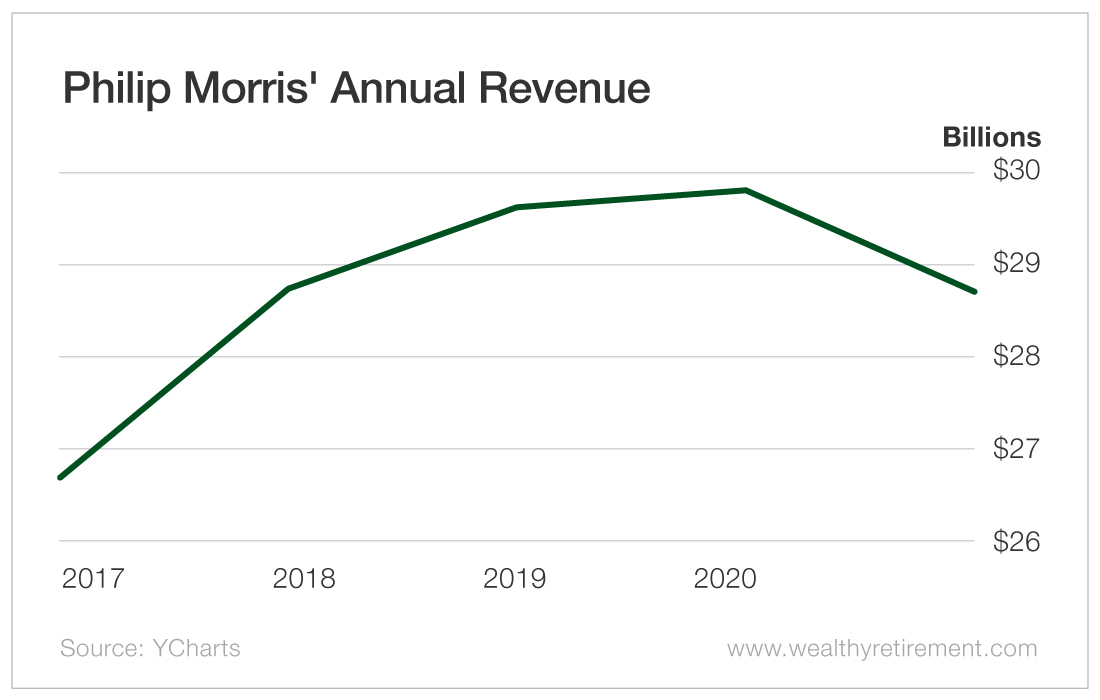 Without that $30 billion of revenue from cigarette sales, this $150 billion company isn’t worth anything.

And Olczak is calling for a ban that would decimate this revenue source?

Talk about biting the hand that feeds you!

To be clear, this wasn’t some offhand remark…

Olczak’s call for a ban on cigarettes is consistent with Philip Morris’ strategic direction.

This tobacco heavyweight has gone “all-in” on healthier (or at least less harmful) smoke-free tobacco products.

A quick visit to the investor relations portion of the Philip Morris website makes it abundantly clear that the company is committed to transforming its business.

Philip Morris International is leading a transformation in the tobacco industry to create a smoke-free future, and ultimately replace cigarettes with smoke-free products to the benefit of adults who would otherwise continue to smoke, as well as to society, the company, and its shareholders.

The age of ESG (environmental, social and governance) investing, also known as responsible business, is upon us.

Society increasingly demands that corporations conduct their businesses with a conscience.

This requires companies to consider not just their bottom line but also the sustainability and ethical impact of what they’re doing.

Governments across the world are getting behind the ESG movement.

The oil and gas majors have been forced to transform because country after country has announced upcoming bans on the sale of combustion engine vehicles.

The management team and board of directors at Philip Morris believe their industry is next in line for government-mandated change.

So instead of waiting for governments to start announcing bans on smoking, Philip Morris is proactively making a huge transition…

It’s trying to get customers to move from traditional cigarettes to smoke-free alternatives, like Philip Morris’ heat-not-burn IQOS product.

Philip Morris has done the research and quotes a 90% to 95% reduction in exposure to harmful chemicals by switching away from traditional burning cigarettes.

And Philip Morris wants to make this move at incredible speeds…

The company’s investor presentations detail how, within 10 years, it plans to convert all of its cigarettes to smokeless options.

I’m very impressed with how much progress the company has already made.

That is roughly one-quarter of the company’s sales.

And while we haven’t entirely adopted smokeless products here in the United States, the international demand for these products is already quite high.

In Japan, for example, heat-not-burn tobacco products have gone from having zero market share in 2015 to now representing 25% of the tobacco market.

There is clearly an appetite among smokers to transition to these smoke-free alternatives.

With governments, like the United Kingdom’s, already unveiling strategies to make their countries smoke-free, smokers will eventually have no alternative.

What intrigues me about Philip Morris and some of the other big tobacco companies is how cheap their stocks are.

Philip Morris, for example, has a near 5% dividend yield and, like the entire industry, trades at half the price-to-cash-flow valuation that it traded at as recently as 2017.

If Philip Morris and the rest of this industry can transition to smokeless products without sacrificing income, these stocks are going to look like great buys down the road.

“The Kids Are Alright,” but This Board of Directors? Not So Much

Why Investors Should Look to the Banks in...