On May 15, I showed you three reasons I thought homebuilding stocks were going to be long-term outperformers…

Reason No. 1: There has been more than a decade of massively underbuilding new homes in the United States since the housing bubble popped in 2008.

Reason No. 2: Interest rates are low, and they aren’t going anywhere anytime soon. The Federal Reserve has told us as much, and that means we are going to have historically low mortgage rates stimulating buyer demand.

Reason No. 3: Share prices of homebuilders are cheap. The sector has underperformed the overall market since the COVID-19 outbreak started in the U.S. midway through March.

Only a month has passed since I presented my investment case for the homebuilding sector, but the story has already changed…

Not for the worse, but for the better.

I’m even more bullish on the prospects for these companies in the coming years now than I was on May 15.

Buyers Are Rushing Back Into the U.S. Housing Market

According to the Mortgage Bankers Association, applications to purchase a home rose 4% last week from the previous week and an incredible 21% from one year ago.

There aren’t many industries in a COVID-19-impacted 2020 that can say they are clicking along at rates higher than they were in 2019.

But mortgages saw the ninth straight week of increases in the number of applications and the highest single weekly volume recorded in more than 11 years.

A nine-week trend of growing demand for houses is obviously great news for homebuilders, and the stock market has noticed.

Since I wrote to you on May 15, the homebuilding sector has risen by 21%, more than tripling the performance of the S&P 500 over that short period of time. 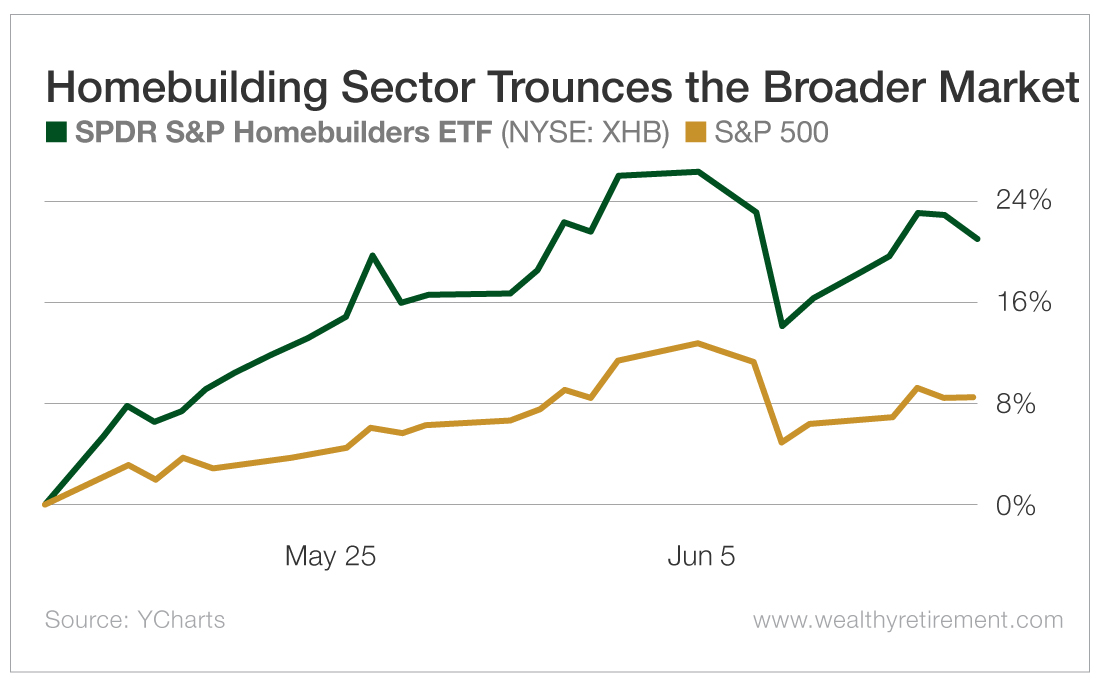 While that is a nice result, short-term success in the stock market often owes some debt to luck.

I would say that if the sector was down over the past month, so I can’t say anything different just because it is up.

My interest in homebuilders stems from what I see coming over the long term. With the tailwinds that this sector has, its companies are set up for years of strong performance.

To appreciate why I believe that, you need to fully understand that the last decade has seen a massive decline in the construction of new homes.

The last decade is not a subtle outlier here. The drop in home construction over the last 10 years sticks out like a sore thumb.

That is a one-third falloff in new homes despite the fact that our population has gone from 150 million to more than 300 million over this time period. With the population doubling, we should have been building twice as many homes over the past decade as we were in the 1950s.

Instead, we have been building far fewer…

This chart shows the ratio of new home construction to the size of the U.S. population. 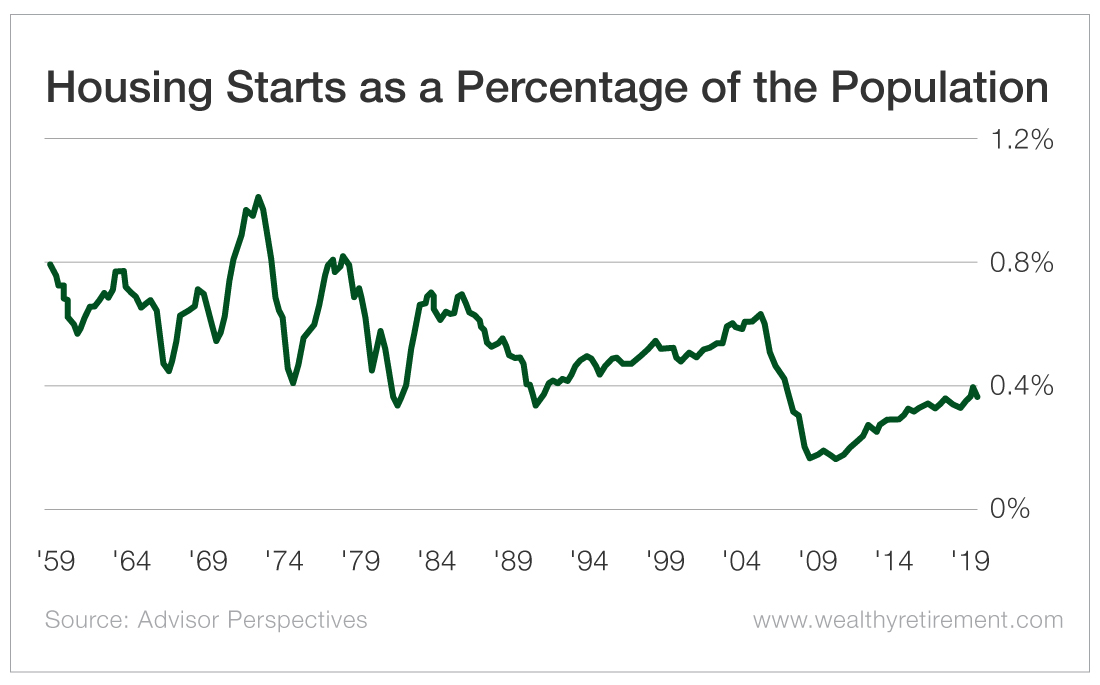 Over the past decade, housing starts as a percentage of the total U.S. population dropped to a range of 0.2% to 0.4%. That is barely half of where it has historically been.

The past decade of massive underbuilding has set the stage. Housing businesses are poised to have a great run for years to come.

Even better, the sector’s sell-off in 2020 created an opportunity for investors to get exposure to this long-term opportunity on the cheap.

When low stock valuations coincide with growing cash flows, you have yourself a winning formula.