In his 2013 letter to Berkshire Hathaway (NYSE: BRK-A) shareholders, Warren Buffett detailed how he advised the trustees of his estate to manage the money he will leave to his wife.

Buffett’s exact instructions were to “put 10% of the cash in short-term government bonds and 90% in a very low-cost S&P 500 index fund.”

Buffett believes in the long-term growth of American business, and he is happy to have his estate own these companies for the long term.

I admire Mr. Buffett greatly. But I disagree with him on the guidance that he has provided for his estate trustees.

Let me show you what I mean…

An S&P 500 index fund, for example, owns the exact 500 companies (with the exact same position weighting) as those in the S&P 500 Index.

Most index funds are market-capitalization-weighted.

That means a greater percentage of the money managed by the fund gets invested into the largest companies it owns.

For example, the largest holding of an S&P 500 index fund today is Apple (Nasdaq: AAPL), the world’s largest company by market capitalization.

Meanwhile, the 100th-largest position in the index is General Motors (NYSE: GM), which currently represents just 0.22% of an S&P 500 index fund.

That means a market-capitalization-weighted S&P 500 index fund now carries a position in Apple that is 25 times larger than its 100th-largest position (General Motors).

And there are 400 positions that carry an even smaller weighting than General Motors.

The smallest position is HollyFrontier Corporation (NYSE: HFC), which accounts for a minuscule 0.01% of the S&P 500 Index.

With the top-heavy way the index is constructed, the largest companies have a disproportionate influence on performance.

That is a record-high concentration.

The smallest positions, meanwhile, are so small that they have very little impact on the overall performance of the fund.

An equally weighted index fund is built differently than a standard market-capitalization-weighted fund.

An equally weighted fund isn’t top- or bottom-heavy. It is perfectly balanced.

That means it is much more diversified.

In an equally weighted index fund, all of the positions are given the same weighting.

For an equally weighted S&P 500 index fund, that means Apple is given the same weighting as General Motors and HollyFrontier Corporation.

Therefore, all of the holdings have the same impact on total performance – no matter how big or how small the underlying companies are. 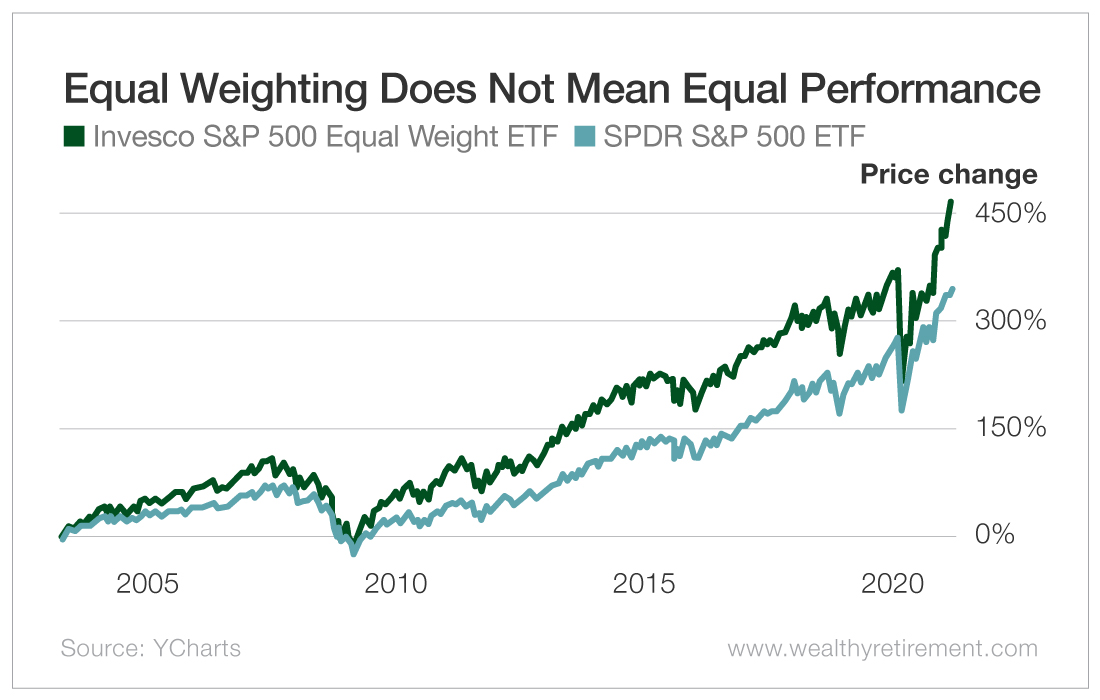 That is a pretty wide margin of outperformance since inception.

If we look back even further in the data, we can see even more consistency…

One study, which looked all the way back to 1925, found that over every single 40-year holding period, an equally weighted S&P 500 fund would have outperformed.

(For clarity, the 40-year holding period was selected because that is the typical amount of time between when someone starts saving and when they retire.)

The study also found that over the entire time period starting in 1925, an equally weighted S&P 500 fund would have outperformed by 2.7% per year on average.

For perspective on how big a difference a 2.7% annual outperformance is over the long term, consider these numbers…

I’m a numbers guy, and the data in favor of equal weighting is very convincing.

With capitalization-weighted S&P 500 funds currently sitting with a record-high concentration in their top 10 holdings, I would suggest that the outperformance of the equally weighted S&P 500 over the next 10 years will be even larger than normal.