A Utility With a Wide Margin of Safety and Big Upside

According to Warren Buffett, the three most important words in investing are “margin of safety.”

Now, what does that mean?

To Buffett, it means making sure that you pay considerably less for a stock than what you believe the underlying business is worth.

As an example, let’s say Buffett wants to pay $5 for a company that he knows is worth $10.

That way, there’s virtually no chance that Buffett is going to lose money, and by paying $0.50 on the dollar, he will likely turn a nice profit.

The concept of margin of safety involves putting defense first – exactly the opposite of what many investors are doing in the market today as they chase absurdly expensive stocks.

With companies like Tesla (Nasdaq: TSLA) trading at absurd valuations, now is the perfect time for investors to think about margin of safety.

Margin of safety was on my mind when I introduced you to undervalued utility Vistra Corp. (NYSE: VST) at the end of March.

At the time, the market had just served us up a fat pitch by overreacting to a one-time loss that Vistra took after a record-breaking freeze caused widespread electrical failures among its Texas clientele last winter.

I felt like there was a huge margin of safety for Vistra shareholders. I wrote…

At Vistra’s current $8.13 billion market valuation, investors are buying a company that has been regularly generating more than $2 billion of free cash flow – and in 2020, it generated $2.5 billion.

This is cash that is available to pay to shareholders as dividends, use for share repurchases, invest in earnings growth or strengthen the corporate balance sheet.

Using past takeover transactions where utility providers similar to Vistra have been acquired as a metric puts the fair value of Vistra’s shares at more than $32.

With Vistra, we had a dollar bill trading for $0.50 – the kind of deal Buffett is always looking for.

In the nine or so months that have passed since I wrote about Vistra, the stock market has slowly started to come around to my line of thinking. 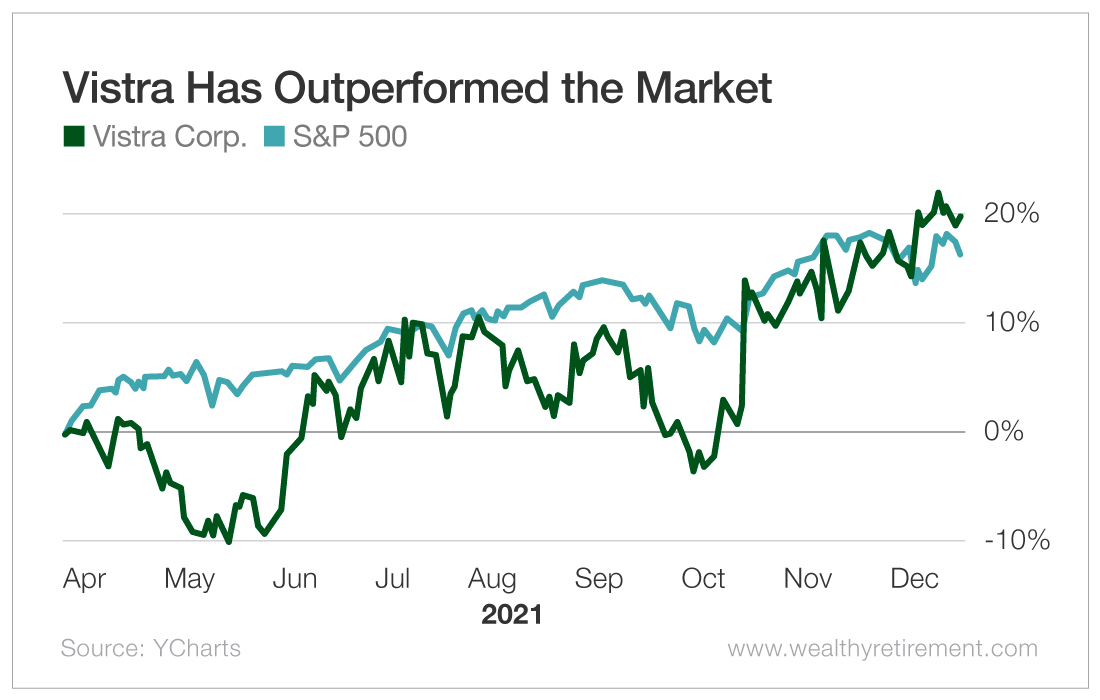 Vistra’s total return of 20.13% (including dividends) has since beaten the market by almost four percentage points.

Not bad for a defensive play.

And I think Vistra’s stock price run is just getting started.

Vistra’s management just announced that it plans to return at least $7.5 billion to shareholders through the end of 2026.

This would equate to a 15% annual cash yield on Vistra’s current share price.

Doesn’t that sound like a solid return versus the 0% that we can earn today in a savings account?

The return of cash is going to come from a combination of share repurchases, dividends and debt retirement.

Often, I cringe when I hear about publicly traded companies repurchasing shares.

Unfortunately, companies often don’t pay attention to whether the shares they are repurchasing are actually undervalued.

In the case of Vistra, however, I could not be more excited about an aggressive repurchase program.

Vistra’s shares are dirt cheap, trading somewhere between $0.50 and $0.60 on the dollar.

Over the next five years, at the current share price, Vistra could repurchase up to 60% of all outstanding shares.

That would reduce Vistra’s share count from 482 million to 192 million and have big implications for earnings per share.

If Vistra reduces its share count to 192 million, that same $820 million in earnings would jump to $4.27 per share.

If Vistra just keeps earnings flat at $820 million for the next five years, the company will still be able to more than double earnings per share because of its rapidly shrinking share count.

That means Vistra doubles as both a defensive investment with a wide margin of safety and a high-octane earnings growth story.

What more could we want than that?!

Don’t Do This When It Comes to Owning Stocks