Three Charts That Will Change Your Mind About This Sector

I have enjoyed one enormous benefit from the COVID-19 outbreak…

Because school has been canceled, my two daughters have been home every day since mid-March.

Getting to spend time with them every single day is a blessing.

They’re 11 and 13 years old, and they still like hanging around with me.

I’m very aware that the window of time where they still think I’m worth listening to is vanishing quickly.

I’m determined to take advantage of every second that I have in which they still want to learn things it took me decades to figure out.

One lesson that I want to teach my kids is that a willingness to admit you have made a mistake is a powerful asset.

Far too many people (me included) cling to their opinions long after they have been proven wrong.

This unwillingness to admit that you are wrong can cost you friends, time and – in the stock market – a lot of money.

A mistaken belief that I have held on to for far too long is that putting money into the biotech sector is more like speculation than investing.

I’ve seen the absurd returns that some biotech stocks have put up and wrongly assumed that the entire sector is too risky.

And that assumption has cost me… 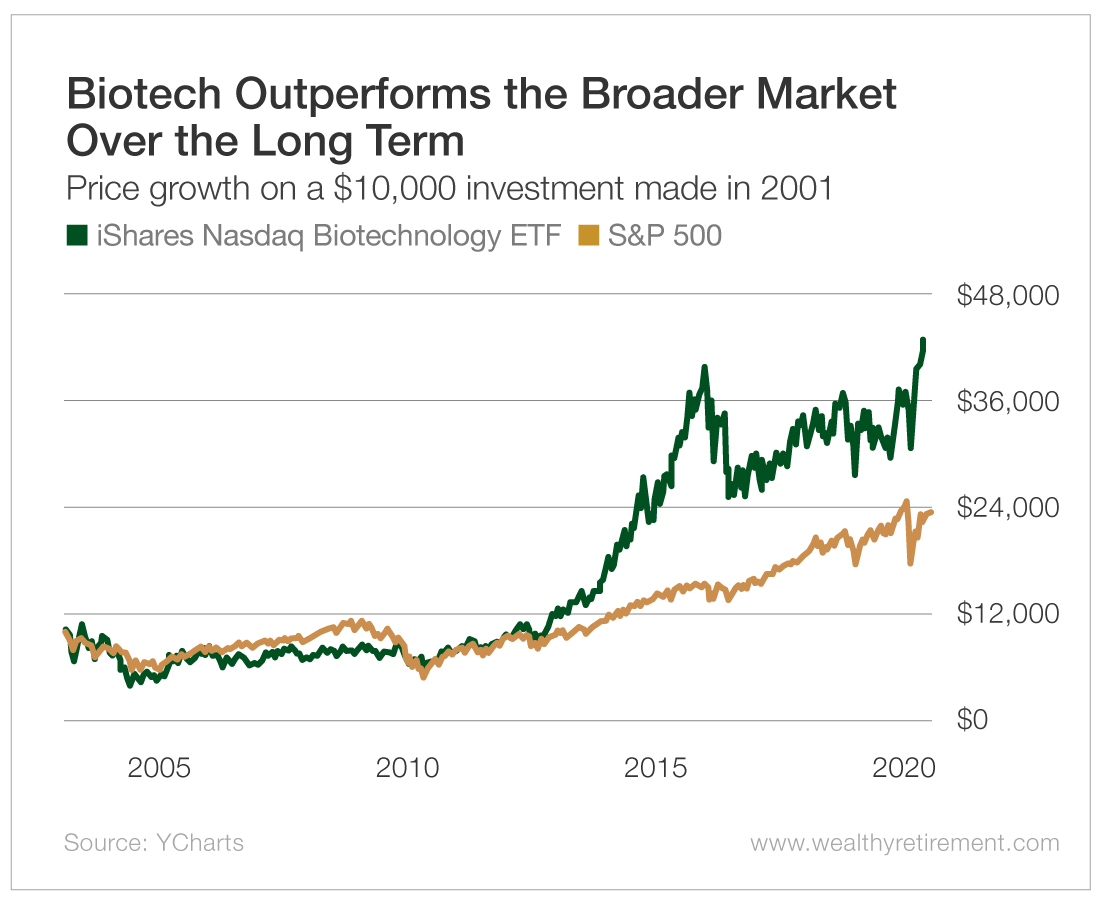 Over this two-decade stretch (that is long term, folks), the biotech ETF has smashed the performance of the S&P 500.

I honestly had no idea that biotech had done this much better than the S&P 500 over this long of a time period.

There is nothing risky about an entire sector that vastly outperforms.

My ignoring of this sector is a mistake that has cost me a lot of money.

Now I’m trying to learn from that mistake.

The Biotech Sector May Be Ready to Run Again

Biotech stocks are still up but have vastly underperformed their historical performance. 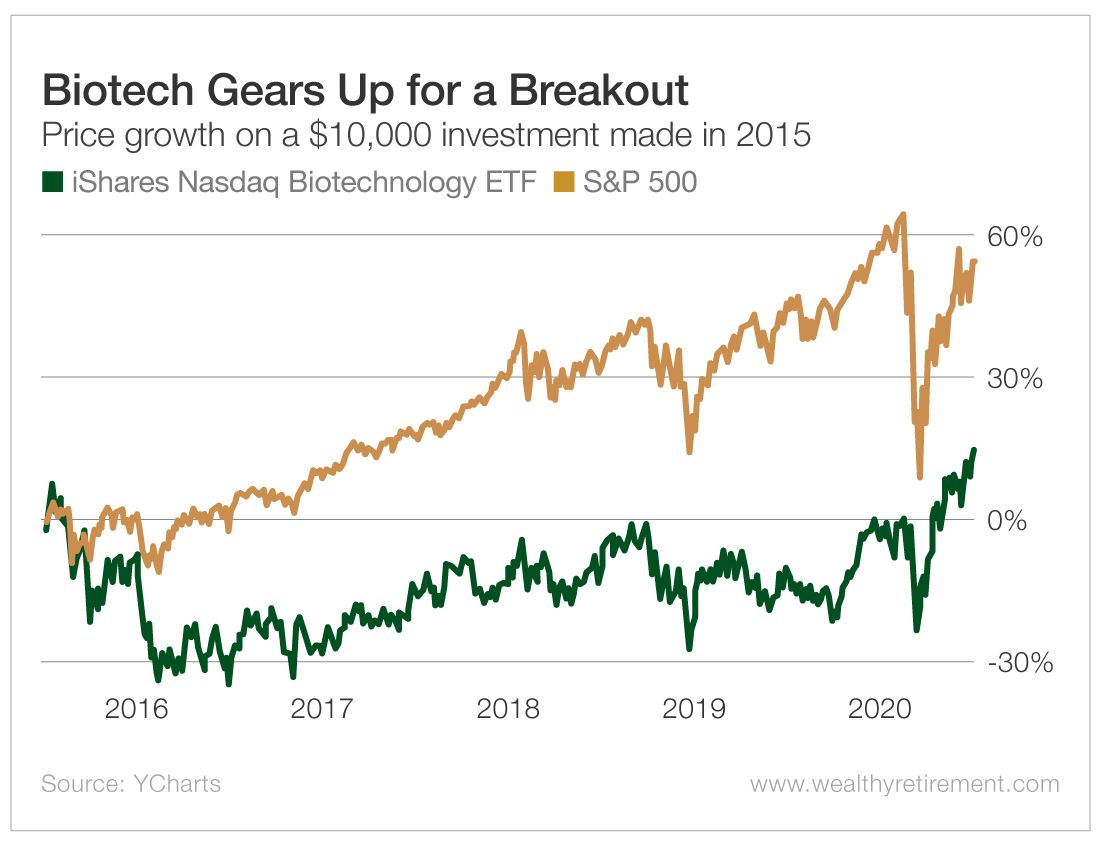 But now COVID-19 is changing the narrative around biotech stocks. Investor interest is quickly returning.

Biotech has been leading the charge to find treatments for the virus.

The virus has also led to the acceleration of the process by which new drugs are developed and approved.

With more investors looking at biotech companies, they have been reminded that this is a very lucrative area to invest in. Unlike most businesses, which plod along slowly generating wealth, biotechs can create incredible value quickly with a successful treatment.

With COVID-19 bringing all kinds of attention back to biotech, I believe the entire sector may be ready for a long stretch of outperformance. These stocks are like a coiled spring after their five-year lull.

Supporting that view is the fact that the sector has broken out in 2020, now up 18% against a flat stock market. 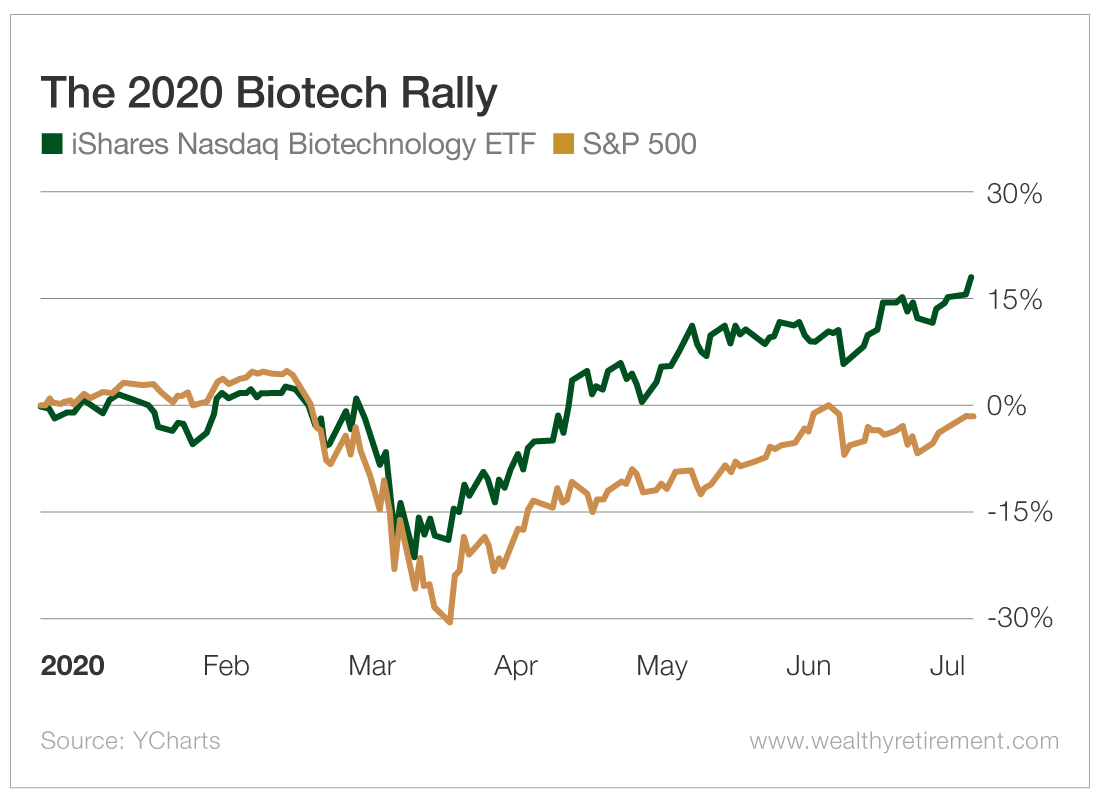 No question that the charts make the sector look interesting.

So too does the fact that these companies are not in any way dependent on the performance of the economy.

People still get sick – and not just from COVID-19 – so the idea of adding stocks that can outperform even if the economy stays in the doldrums is very appealing.

I’m not too proud to admit that I was wrong about biotech. The sector could be a great “hedge” for portfolios against a prolonged coronavirus-created downturn.

How to Profit From Wall Street’s Top Catalysts

Are Homebuilders Still a Buy?