The One Thing to Teach Your Family About Money

It seems as if the world has gone haywire. Politicians on both sides of the aisle are spending taxpayer dollars (and future generations’ taxpayer dollars) like drunken sailors.

The president wants interest rates to be cut. This isn’t because of any need to lower rates (after all, he constantly talks about our “record” economy), but because it will help him get reelected.

Who cares about the asset bubble it will create or the massive burden our children and grandchildren will be left with? That’s for the next guy or gal who occupies the White House to worry about.

Unemployment is at its lowest level in decades, consumer sentiment is at 18-year highs and GDP grew 3.1% in the first quarter.

Unbelievably, Fed Chair Jerome Powell, a very sharp seven-year veteran of the Federal Reserve who is reportedly worth nine figures, is going along with this insane plan. And so is Congress, Republicans and Democrats alike.

I can’t help but wonder whether, if we had a citizenry that was educated on how money works, most of these bozos in Washington would be voted out and have to work a real job (maybe for the first time in their lives).

I’m talking about you, Marco Rubio and Bernie Sanders (and many others).

The problem is that financial literacy has not been taught in schools or universities until just the past few years. And many of the programs used are awful. It’s not that the lessons they teach are wrong – they’re good lessons. The problem is that the content is boring.

I watched my high schooler’s mandatory online financial literacy course (it was maybe a total of eight hours), and it was a joke. C-SPAN marathons are more engaging.

A basic economics course should be mandatory in high school, as should a personal finance class that teaches how to balance a checkbook (even an online checkbook) and how compound interest works, along with consumer skills.

In fact, if you want to teach your kids or grandkids (or even yourself) just one financial skill that will make all the difference in life, it should be understanding compound interest.

So many consumers jump at cheap credit card offers. I once signed up for a credit card in college because they gave away king-sized Reese’s Peanut Butter Cups.

(To be fair, I would have done nearly anything for the peanut butter cups. They were king-sized, after all.)

But those credit cards got a lot of people in trouble as the debt piled up, and even those who diligently paid their minimum balances due every month fell further and further behind as the interest compounded.

On the flip side, those who invested young and let their money compound are now so far ahead of their peers it’s ridiculous.

Compound interest is when the interest you earn earns interest. 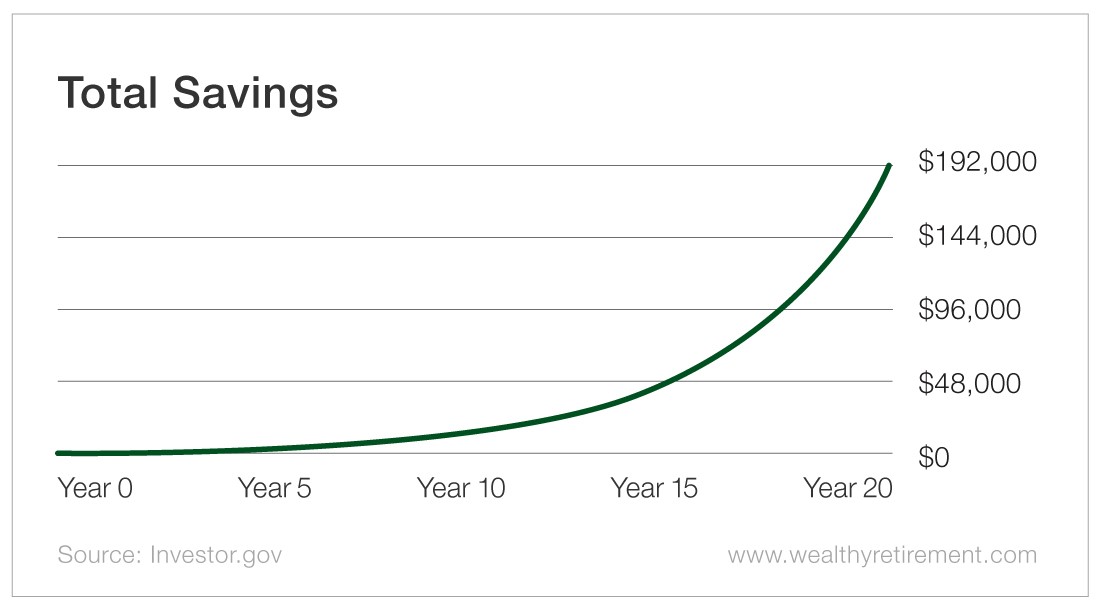 Here’s another way to look at it…

The person who waits has to invest $100,000 more just to get close to the total of the first investor.

It is my great hope that this generation of students will be taught some basic financial skills that will help dig them out of the holes we’ve created for them.

When to Cut a Winner

How to Become a Millionaire Before You Retire