Home Financial Literacy How a Stop Loss Saved Me Thousands

Editor’s Note: Bad news abounds – assets are overpriced, inflation is rising, the delta variant is spreading and China is dampening the markets with its crackdowns. So it’s only natural to worry about your retirement in the midst of such global upheaval.

Fortunately, The Oxford Club’s experts – including Chief Income Strategist Marc Lichtenfeld – are meeting in Colorado from September 9-10 for The Oxford Club’s 2021 Private Wealth Seminar, in which they’ll share the best investment opportunities they’ve uncovered this year.

In-person tickets for the seminar sold out in record time, but we’re giving you the opportunity to livestream the whole event from the comfort of your own home. There were 32 different investment opportunities discussed at last year’s seminar… including prospects for 117%, 202% and 601% gains, all in less than five months.

Back during the dot-com boom, I worked for a startup in San Francisco. I was a fairly early hire at the company (I think I was employee No. 36), so I was given lots of options.

Like many dot-coms, we had no revenue. But that didn’t stop us from expanding in ridiculous ways. We opened offices in New York and London. We had Bagel Mondays, Pizza Thursdays and a keg on Friday afternoons. And, of course, a foosball table stood in the break room. I think we grew to about 150 people.

And then the private equity money dried up, and it all came crashing down like so many other dot-coms. I was laid off in 2002 and wrote off the three years I was at the startup as a fun learning experience that had introduced me to some great people.

That same company changed its business model and survived. I got a notice in early 2021 that it was going public. Goldman Sachs was the lead underwriter, and the initial public offering price was $50.

Those tens of thousands of options that I had were long gone. But I had exercised a very small amount when I was working there, so I did own some stock.

Having looked at the company’s financials and knowing the CEO, I wanted to sell at 9:31 a.m. on the day it went public. But my shares were restricted, or “locked up,” for six months – because, technically, I was an insider.

I pleaded with the company’s lawyers that since I hadn’t worked at the company in nearly two decades, I was hardly an insider. Unsurprisingly, they didn’t budge.

The stock opened for trading at $77, hit a high just shy of $82 later that day and started its long descent. All I could do was watch helplessly.

By the time the lockup expired, the stock was at $33.

It had bounced around the low $30s a few times, so that price level became support (an area where a stock stops falling). I wanted to give the stock a chance to recover, but I wasn’t willing to let it dip much below support. If it broke support at $33, I figured it was headed meaningfully lower, so I set a stop at $32. 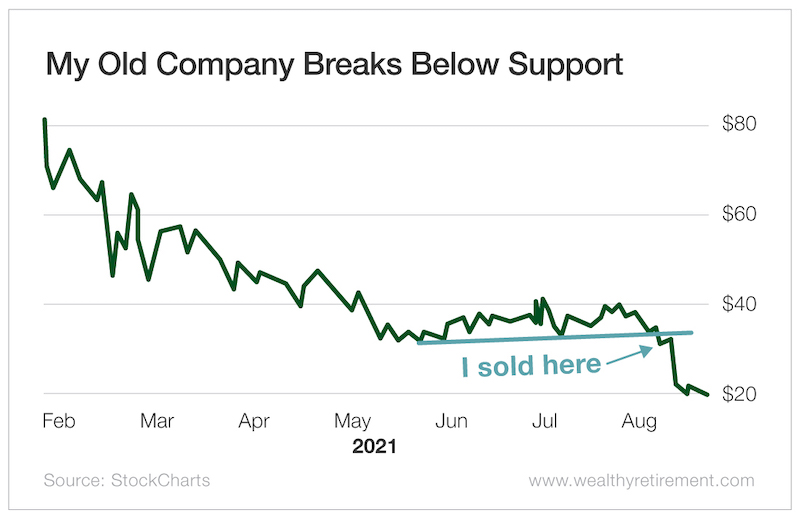 A bad earnings report tanked the stock, which is now trading around $21. I saved myself thousands of dollars.

Had I not set a stop loss, I may have said to myself, “Well, earnings are coming out soon, let me see how they do.” Or I might have thought, “I’m not selling at the low – surely it’s going to bounce a little…”

Using a stop loss removes emotion from your decision to sell – usually when you need it most, when the stock is sliding.

Whether you use a stop based on a trailing percentage, support level or other method, be sure to have an exit strategy in place when you buy the stock. That way, you sell before the stock falls even more.

Friday afternoon keggers by the foosball table are a thing of my past. But thanks to setting my stop loss, I’ve secured the funds for plenty of Bagel Mondays and Pizza Thursdays in my family’s future.