written by Marc Lichtenfeld Wednesday, May 5, 2021

When a Wealthy Retirement reader suggested I look at Suburban Propane Partners (NYSE: SPH) for this week’s Safety Net column, I was excited to make a King of the Hill joke.

If you never watched the show, which ran from 1997 to 2010, the lead character, Hank Hill, was very proud of his job selling “propane and propane accessories.”

But lo and behold, Suburban Propane Partners sells only propane – no accessories.

And while Hank Hill works for the fictional Strickland Propane, let’s see whether he’d be equally as proud of the real-life Suburban Propane Partners’ distribution (because the company is a partnership, its dividend is called a distribution).

Suburban Propane Partners is a small cap company that offers propane and heating oil in 41 states to 1 million customers. The Whippany, New Jersey-based company has been around since 1928.

It pays a generous $0.30 per share quarterly distribution, which equals an 8% annual yield. But can Suburban Propane maintain that yield?

The company’s free cash flow slipped last year to $177 million from $192 million. This year, it is forecast to decline another 7% to $164 million. 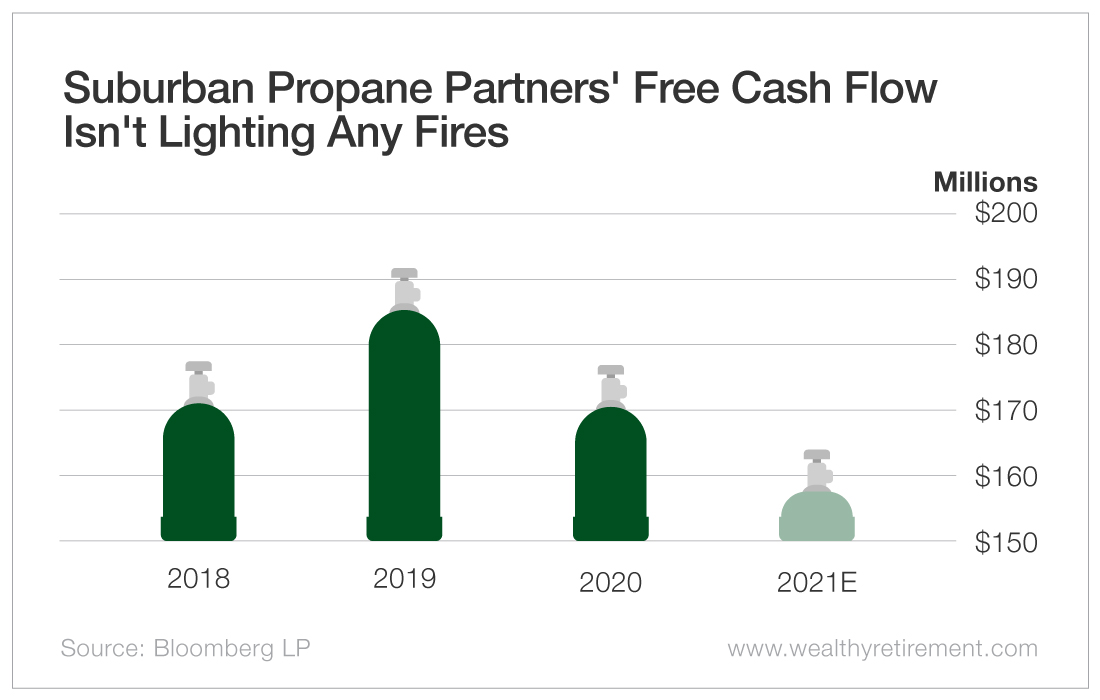 Last year, the company paid investors $130.2 million in distributions for a payout ratio of 73% – which is near the top of my comfort zone but still fine.

Due to a distribution cut in late 2020, the company is projected to pay only $75 million in distributions for a very affordable 46% payout ratio.

So we have an interesting situation…

Suburban Propane Partners should be able to easily cover its distribution this year. However, free cash flow is falling, which gets negative marks from SafetyNet Pro.

And the company’s recent history of cutting the distribution is also a big warning sign.

If free cash flow can stabilize, the distribution should as well.

But if free cash flow continues to decline, it is very likely the company will once again lower its distribution.

You can also see whether I’ve written recently about your favorite dividend payer by clicking on the magnifying glass at the upper right corner of the Wealthy Retirement homepage and typing in the company name.

Can Exxon Mobil Barrel Its Way to Dividend...