A 17% yield with monthly dividends might be as welcome as an island after a shipwreck. But investors who travel to Orchid Island Capital (NYSE: ORC) should be wary of what lurks in this misleadingly lush dividend jungle.

Mortgage REITs borrow money short term and lend it out long term. They have struggled this year due to low interest rates and a narrow and sometimes inverted yield curve.

When the yield curve is inverted (as it was for part of this year), short-term rates move higher than long-term rates.

As a result of this difficult environment, Orchid Island’s net interest income (NII) – the money it makes off interest minus expenses, and the best measure of a mortgage REIT’s financial performance – is at its lowest level in years.

In fact, this year’s NII will be close to half of the figure from just two years ago. 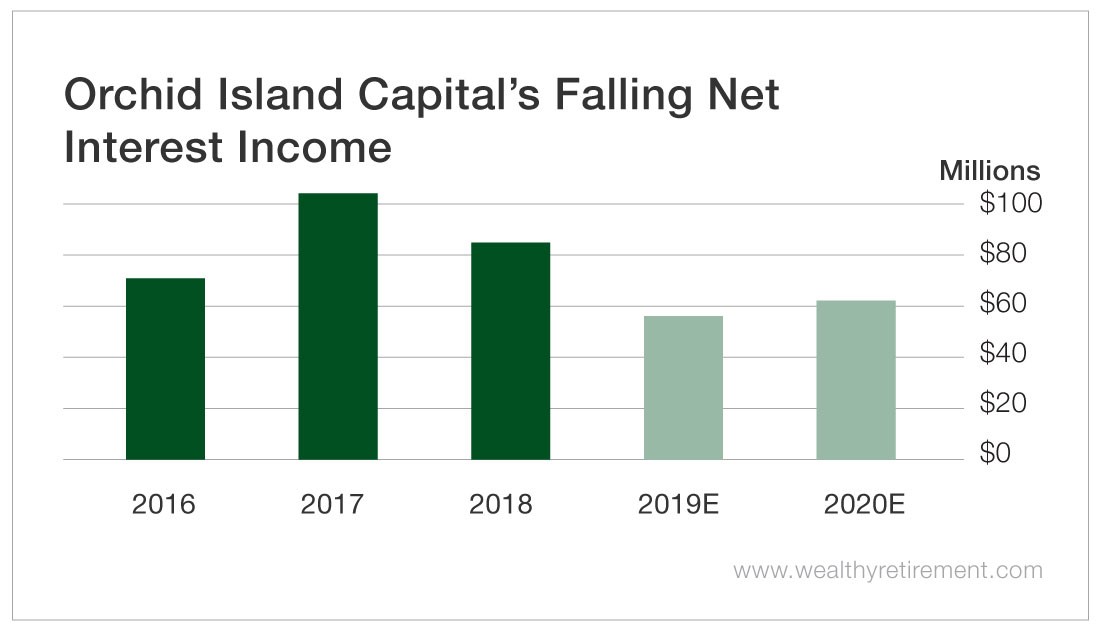 As a result of the receding NII, the company cannot afford the estimated $58 million in dividends it will pay out in 2019.

Next year, Wall Street anticipates a cut to $50 million, which will make the payout ratio a more breathable 82% – but that’s only if its NII doesn’t shrink again.

Speaking of dividend cuts, Orchid Island Capital is quite familiar with them.

But as you can see, it’s not sustainable. And given management’s dividend-cutting track record, it won’t even try to keep it afloat.

This is a dividend that I’m pretty certain will be cut in the next 12 months.

If you have a dividend whose safety you’d like me to analyze, leave the ticker symbol in the comments section.

A Big Biotech on the Verge of an...

A Stag Party Everyone Can Enjoy

Does a Good Track Record Mean This 5%...

Can This 9.7% Yielder Possibly Be Safe?