It’s been a tough go lately for stocks in the energy sector.

Energy stocks in the S&P 500 have been sliced in half this year. Others, like NGL Energy Partners (NYSE: NGL), have fared even worse. It’s down 64% year to date.

Tulsa, Oklahoma-based NGL is a master limited partnership (MLP) that transports oil and natural gas liquids through its pipelines.

Earlier this year, it slashed its quarterly distribution (MLPs pay distributions, not dividends) from $0.39 to $0.20 per unit (partnerships have units, not shares). But because the stock has fallen so dramatically, that $0.80 annual distribution still comes out to a 19.8% yield.

Can the company maintain this lower payout?

This makes for an interesting case. Currently, NGL’s numbers are terrible. Revenue, earnings and CAD are falling.

In fiscal 2020, the company didn’t come close to affording its distribution, paying out $244.4 million with just $25.8 million in CAD.

However, because of NGL’s shift in focus to the higher-margin water business from lower-margin propane, its CAD is expected to jump to $229.2 million. That should easily cover a lower $103 million distribution. 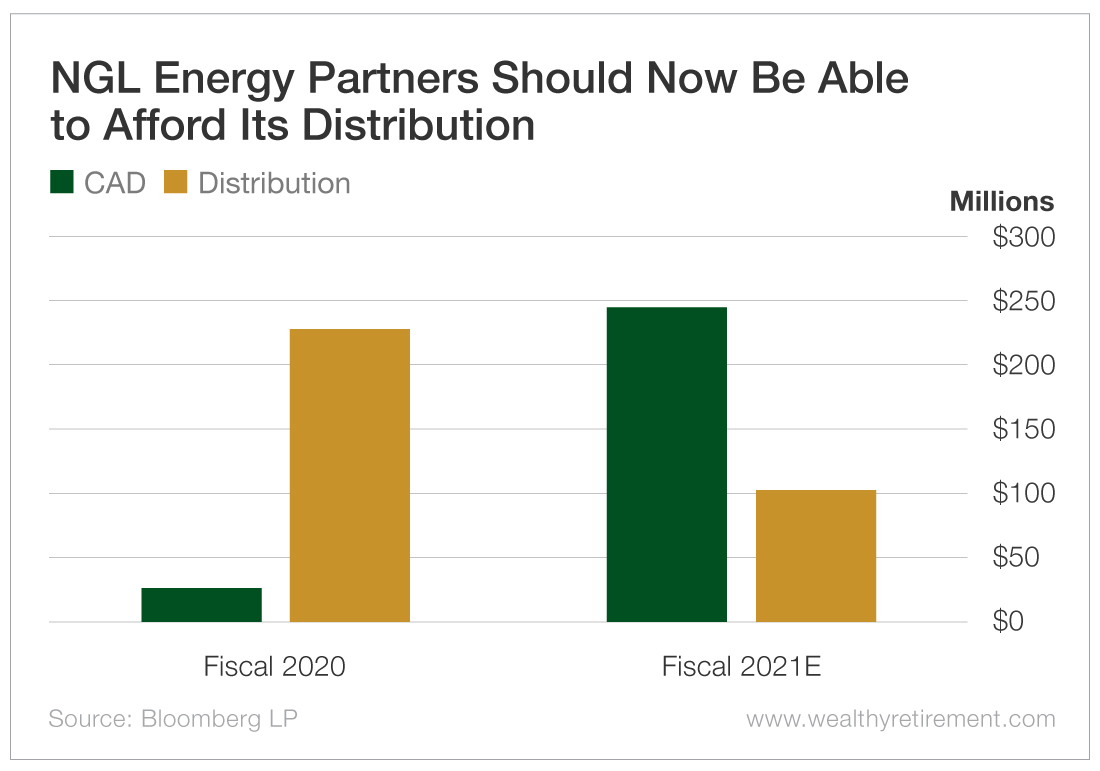 NGL also has a lot of debt – more than 10 times its earnings before interest, taxes, depreciation and amortization (EBITDA). That debt has to be serviced, which lowers cash flow.

Lastly, NGL cut its distribution this year and in 2016.

So basically, the company has a lot to prove this year. If its numbers aren’t as strong as forecast, another distribution cut seems likely.

We’ll get a better sense of that in the first week of November when NGL reports quarterly results. Considering things haven’t gotten better in the energy sector, I suspect the company will miss analysts’ estimates.

But regardless of what I expect, when the company reports results, with low cash flow in the past year, high debt and a history of cuts, NGL’s distribution cannot be considered safe.

If in fiscal 2021 NGL proves it can afford its distribution, it will be eligible for an upgrade. But until then, it receives the lowest rating possible.