written by Marc Lichtenfeld Wednesday, May 12, 2021

Everyone has crypto fever these days. Even the giant financial institutions.

Big banks, like Citigroup (NYSE: C) and JPMorgan Chase (NYSE: JPM), are getting in on the action.

At this stage of the game, crypto probably doesn’t move the needle for these behemoths. They do just fine with investment banking businesses, trading desks, loans and other channels that bring in billions in revenue.

As a result of their big profits, they pay shareholders dividends. And those dividends may be about to get larger.

The Federal Reserve has limited the dividends banks are allowed to pay since the pandemic began. But in March, it said it will lift the ban shortly – probably at the end of June – if the banks pass the Fed’s stress tests, which they are expected to do.

That could mean a meaningful increase for shareholders of banks like JPMorgan Chase, which currently yields 2.2%.

But while the bank may be allowed to raise its dividend, should it?

When we analyze banks, the key metric we look at is net interest income (NII).

Admittedly, companies like JPMorgan generate revenue from other sources, like investment banking, that is not reflected in net interest income. But NII is the most conservative measure we can look at.

If the dividend is safe when analyzing NII, then it most definitely will be when adding in other sources of revenue.

That’s not surprising considering that, aside from Paycheck Protection Program (PPP) loans funded by the government to keep people on payrolls, lending fell as many businesses weren’t able to function.

This year, NII growth is forecast to be a hair over flat compared with 2020’s NII. 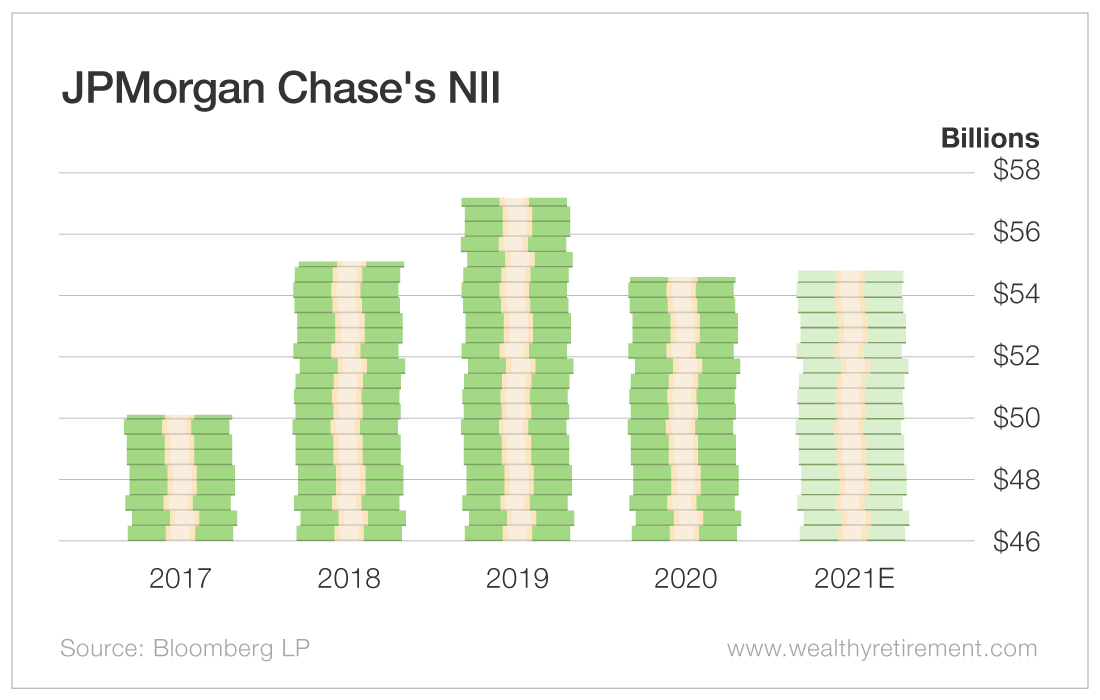 So NII isn’t trending higher, which isn’t great. Let’s see whether the company can pay the dividend even with the dip in NII…

Last year, JPMorgan paid $12.7 billion in dividends. This year, that figure is forecast to inch up to $13 billion – though that likely doesn’t include any assumed raises once the Fed lifts the restrictions on bank dividends.

If the 2021 estimates are correct, JPMorgan will pay just 23% of its NII to shareholders in dividends.

Heck, even if JPMorgan Chase doubled its dividend, it would still pay less than half of NII in dividends.

And don’t forget it has those other noninterest-related revenues and profits on top of NII. It’s not like JPMorgan is lending out Ethereum. It’s getting noninterest income from its crypto and other activities.

Lastly, JPMorgan Chase has hiked its dividend in each of the past 10 years. The dividend is now more than double what it was before the financial crisis in 2008 and 2009.

While NII growth is weak, the company’s low payout ratio and strong track record of dividend increases mean the dividend is extremely safe. I expect JPMorgan Chase to raise the dividend for an 11th straight year once the Federal Reserve loosens the regulations on bank dividends.

And be sure to search the Wealthy Retirement homepage for your favorite dividend stock by clicking on the magnifying glass in the upper right-hand corner and typing in the name of the company.

Will Annaly Finally Get an Upgrade This Year?

Is This REIT’s Dividend Just What the Doctor...