On Saturday morning, I’m going to gulp, put one foot forward and then start running straight uphill. Once I get started, I won’t stop moving for the next 11 or 12 hours.

After a year of training and five canceled races, I’m about to run a socially distanced ultramarathon.

This ultramarathon is called the “S3.” The “S” stands for “Sinister.” The course covers 66 kilometers and 9,000 feet of elevation in Rocky Mountain trails in Crowsnest Pass, Alberta.

My wife, Stacey, and I will be celebrating our 20th wedding anniversary.

Unlike an ultramarathon, being married to her has been no challenge at all. I wish everyone could have a partner who wakes up happy every single day and makes life so much fun.

Seeing Stacey and my two kids at the finish line will be the best moment of my entire year.

Like in an ultramarathon (or relationship), when investing, it’s easy to go too hard early. Success requires patience.

Watching the share prices of Citigroup (NYSE: C), Wells Fargo (NYSE: WFC) and Bank of America (NYSE: BAC) languish after releasing third quarter earnings that I thought were pretty good reminded me of that…

I went into this earnings season expecting that a drop in loan-loss provisioning would be the catalyst that would move bank shares higher.

I was right about the big improvement in loss reserves.

These declines exceeded my optimistic expectations, yet they failed to light a fire under the stock prices of the banks. Instead, the share prices of these companies dropped.

Instead of feeling relief that the worst of loan-loss provisioning is now behind us, the market focused on the damper that low interest rates are putting on lending income.

And with the Fed signaling low rates for the foreseeable future, interest rates are going to be a headwind for banks’ earnings growth for a while.

While low rates aren’t helpful, when I look at the big banks, I see stocks that are historically cheap on traditional valuation metrics.

Citigroup and Wells Fargo especially, which are trading at just 50% of book value, are almost comically inexpensive. 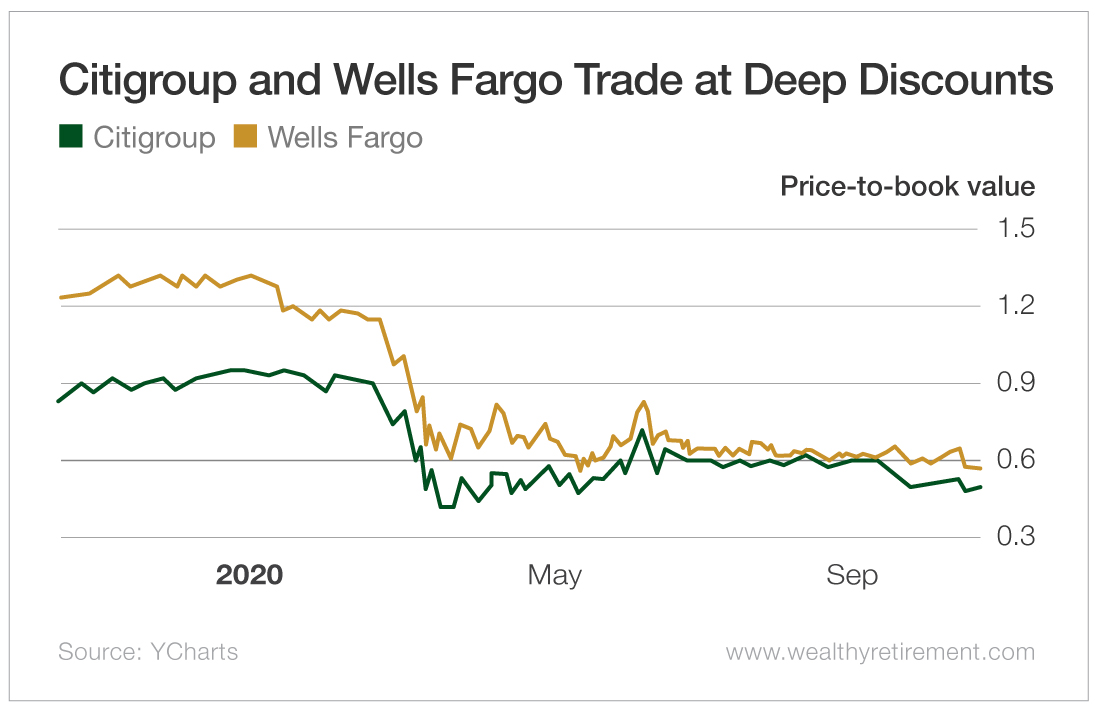 Combine that with the fact that the balance sheets of the banks are also historically strong, and these rock-bottom valuations are even more appealing.

Given these valuations and the fact that shares could easily double, the downside is virtually nonexistent.

I hope this trade doesn’t test our patience as much as an ultramarathon. But if it does, the risk-reward offered here is worth it.