I’m frequently asked how markets do during a presidential election year.

Looking back through history, there are certain trends in the markets during the first, second, third and fourth years of a presidential term.

Market watchers forecast based on how history repeats itself during these cycles. So today, I’ll focus on what tends to happen in the fourth year of a presidential term.

Since 1952, the Stock Trader’s Almanac tells us, the Dow has returned 10.1% on average when a sitting president has run for reelection.

(Of course, there is no crystal ball for the market. Past performance is no indicator of future performance. But the logic behind this trend is both simple and convincing…)

Over the same time period, the index has fallen 1.6% when there was no incumbent running for president.

You can see the main reason for the strong equity returns when an incumbent runs for reelection: lack of uncertainty.

By the time a president has reached a three-year tenure, investors are pretty certain, rightly or wrongly, of what to expect from them.

Furthermore, those presidents have tended to initiate actions that will bolster the economy – like cutting taxes – in the lead-up to the fourth year of the cycle.

Historically, presidential election years have not been great years for the bond market. 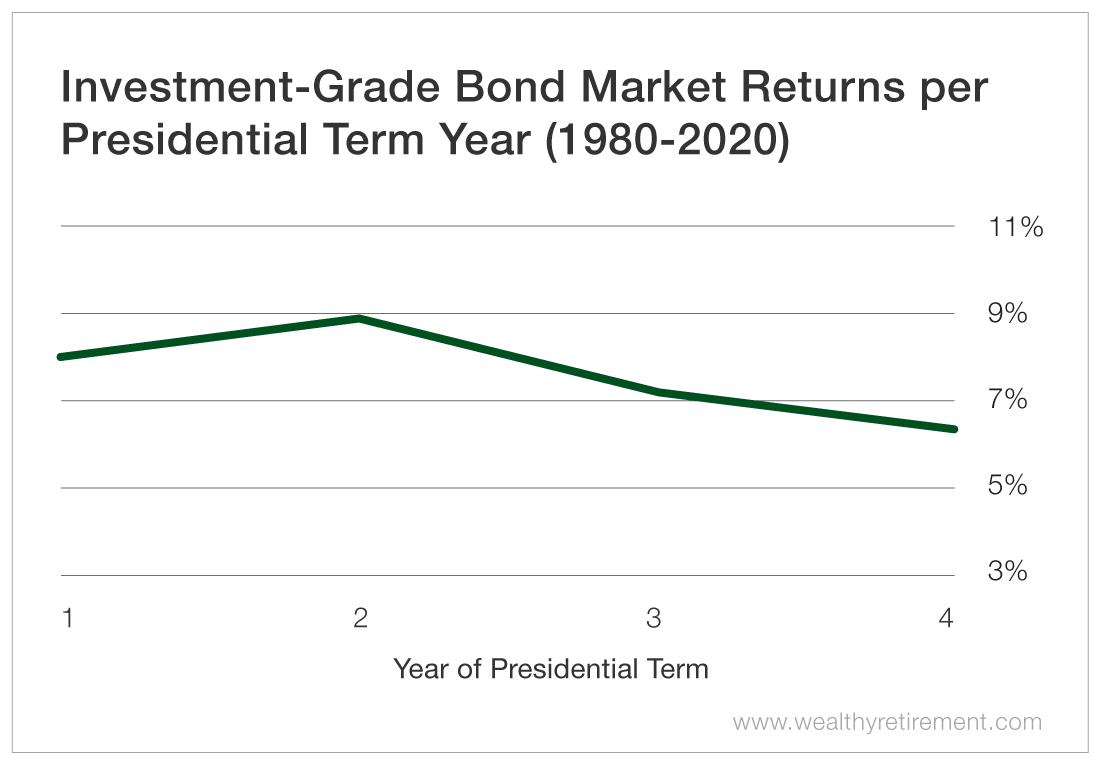 Going back 40 years, the fourth year of a presidential term sees bonds return 6.48% – an underperformance compared with their 8.97% average return during a president’s second year.

But there’s no cause to panic… Strong returns can still be had in bonds during those years with appropriate duration management, sector management and security selection.

What About the Fed?

Historically, the Fed has tried to minimize actions during a presidential election year because the committee doesn’t want to be part of the debate between candidates.

The Fed cut rates three times last year and now says that it is currently in a “pause.” It will look at incoming data to see if a rate cut or hike is the next appropriate move.

Ideally, the committee would probably like to see no movement in 2020.

But what if the U.S. economy (for some reason) falls off a cliff in 2020, which would give ammo to those who say the Fed should cut rates?

Conversely, what if inflation spikes up well above 2% in 2020, providing ammo to those who say the Fed should hike rates?

I expect no movement from the Fed this year, but those two wild-card scenarios could change the equation.

A final wild card: the impeachment proceedings. Currently, they have not impacted the markets because the expectation is that they will be largely symbolic.

But what if something happens along the way to upset that applecart? That too could change the calculus on how bond markets will perform in 2020.

How to Keep Your Portfolio Right-Side Up

These wild-card scenarios represent why it’s so imperative to build your bond investing strategy on strong foundations. If you really want your portfolio to be bulletproof…

Studies have shown that the first year of a presidential election cycle is one of the worst for equities.

Often this is because that is the year “the piper must be paid” for any largesse from the administration in the presidential election year, and the economy and stock market could suffer.

Be sure your portfolio is ready for the run-up that this fourth year could create – and also be sure it can take any wild-card downturns in stride.

Insights From the Middle of a Bear Market