3 Secrets to Beating the Odds in a Bear Market

“You’ll never make that money back!” the pitchman breathlessly exclaimed.

The guy on the radio was selling annuities and warning investors not to put their money in the risky “Wall Street casino.”

He tried to scare listeners by telling them that if the market crashed, as it did in 1987, or if we have another nasty bear market like what we had in 2000 or 2008, “it would take a lifetime to make that money back.”

He couldn’t be more wrong.

It was the biggest one-day drop in U.S. stock market history.

In fact, according to Bloomberg, it took just 15 months. 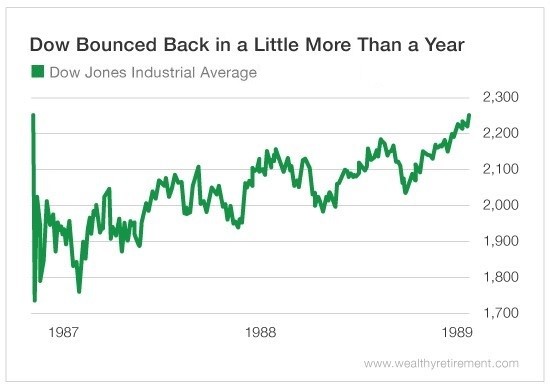 This one took longer to recover, but the index was back at October 2007 levels by April 2013. Just check out this chart based on Bloomberg data… 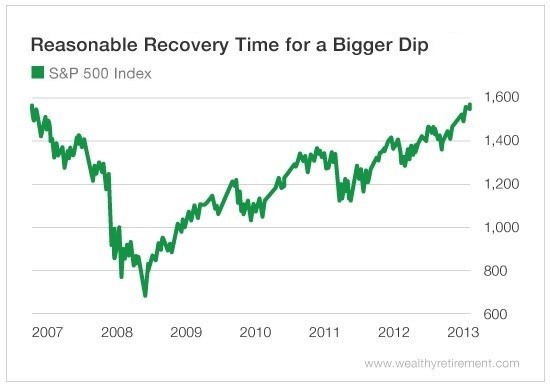 Five and a half years is a long time, but it’ hardly a “lifetime.”

That’s just slightly below the market’s historical average of 7.6%. Not bad considering you’d have bought at the market top right before the worst collapse since the Great Depression.

My point is that the annuity salesman exaggerated the market’s risk to make annuities sound attractive.

It takes a lifetime to recover from a bear market or crash only if you sell into the panic.

When I wrote Get Rich With Dividends, I looked at the market’s 10-year rolling returns.

So in other words, you had to sell during the worst economic and stock market downturns in history to lose money over 10 years.

And there were plenty of periods associated with those bear markets where you still would have made money.

For example, if you had been invested in the broad market from 1932 to 1941, you still would have made money, despite the Great Depression.

So the idea that you’ll never make back any money (that you may be down on paper) in the next market crash is nonsense.

Bear markets happen. They’re not fun, but they’re not the end of the world either.

Understand that it doesn’t take your whole life to make back paper losses.

And if you take the above steps to minimize the damage of a bear market, you won’t get freaked out by a downturn or by an annuity salesman trying to scare you into his product.

How NOT to Lose Money in a Volatile Market

The Safest Way to Survive a Market Sell-Off

The Danger of Using Leverage in Your Retirement...