Note: I’ll be taking the reins of today’s dividend safety column while Chief Income Strategist Marc Lichtenfeld is on vacation. I’ll be using his proprietary research system SafetyNet Pro to pull back the curtain on a reader request.

That’s one of the great things about this system…

While it’s a winning combination when matched with Marc’s income investing expertise, it was designed with all users in mind, from financial professionals to investors who are just starting out.

And today, I’m excited to take a deep dive into what the numbers have in store for this week’s featured dividend payer.

Iron Mountain (NYSE: IRM) is one of the least sexy stocks out there, yet it continues to deliver attractive dividend yields year after year.

Currently at 9.25%, its yield raises the question of whether the company will follow in the steps of many others in 2020 and slash its dividend.

Iron Mountain is a real estate investment trust (REIT) that specializes in the secure storage of physical and digital documents for companies in every industry, ranging from microfiche to blueprints to personnel files.

Plus, the majority of these storage items are highly sensitive and don’t have physical backups – so moving them to another company is undesirable. This has cushioned the impact of COVID-19 on Iron Mountain’s business.

In fact, the company has continued to expand in 2020 with recently signed agreements at facilities in Singapore and Frankfurt, Germany, and also with San Francisco-based Keevo to protect digital cryptocurrency wallets.

This is all good news for dividend safety, right?

Iron Mountain has raised its regular dividend in nine out of the last 10 years, and it has increased it by 30% over the last five years to $0.62 quarterly.

But Iron Mountain has a consistently high payout ratio of more than 100% using funds from operations (FFO). This merits a deduction in the SafetyNet Pro grading system.

The estimated 2020 payout ratio is 101.9%, which will be Iron Mountain’s lowest in the last five years but still too high. If Iron Mountain wants to maintain this dividend payment level, it may have to use cash on hand or issue new debt.

Iron Mountain doesn’t have pressing debt issues right now since the average maturity of its notes is in February 2028.

But Iron Mountain has beaten FFO per share estimates in each of the last four quarters, and total FFO grew each year from 2016 to 2018… So what’s going on with all that cash?

Iron Mountain has continued to expand its physical facilities and make a significant push into digital storage, resulting in capital expenditures of $605 million in 2019 – the company’s highest amount ever.

The good news is that Iron Mountain’s 2020 capital expenditures are estimated to be its lowest since 2012 at $274.5 million, and if that continues, it will free up some cash to cover dividends. 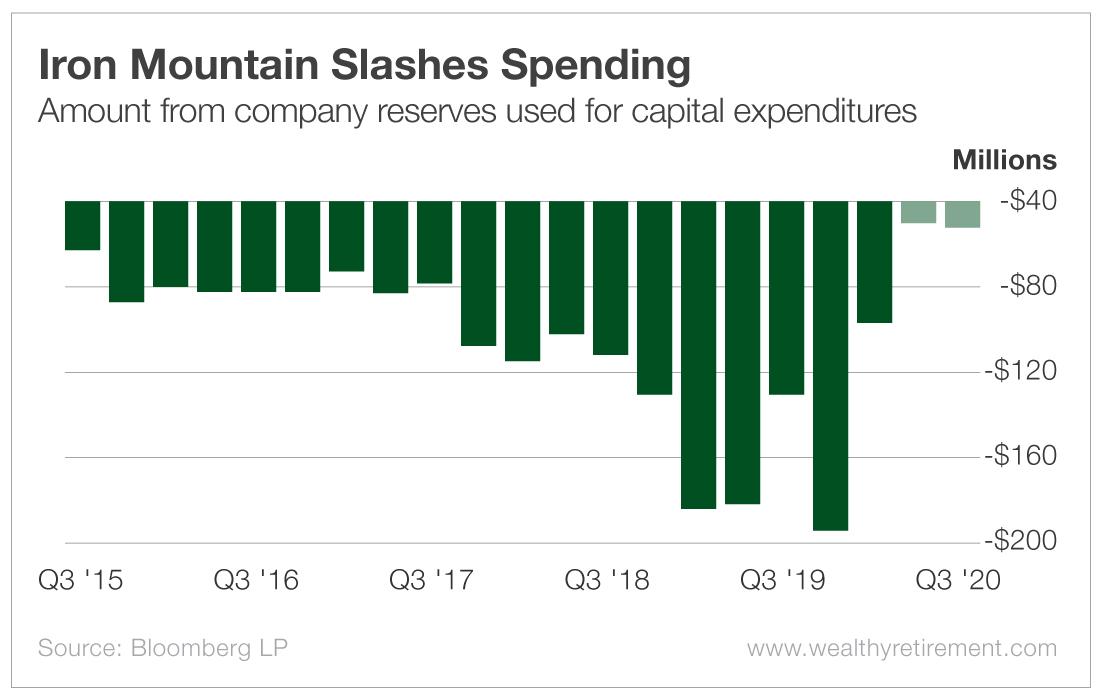 The company also started streamlining its organizational structure in 2019 by cutting jobs and reassigning responsibilities with fewer employees. This process will be completed by 2021 and should be positive for cash flow.

The average price target from Wall Street analysts is $32.20, but one bearish analyst at Credit Suisse has his at $16. While we often value going against the grain here at Wealthy Retirement, it’s worth noting that this analyst’s “Underperform” rating has been right for the last three years.

The SafetyNet Pro system penalizes Iron Mountain because of its consistently high payout ratio. If the company doesn’t pull back from its recent large capital expenditures, then it might be forced to raise more debt or cut its dividend.

If you have a stock whose dividend safety you’d like analyzed, please leave the ticker symbol in the comments section.

Why I Won’t Touch Tesla With a 10-Foot Pole

Are These All-American Dividends Safe?

The Safest MLP on the Market