Are you ready for a chart that only a contrarian can love?

This graphic compares the performance of three different stock market exchange-traded funds (ETFs) since the start of 2012. 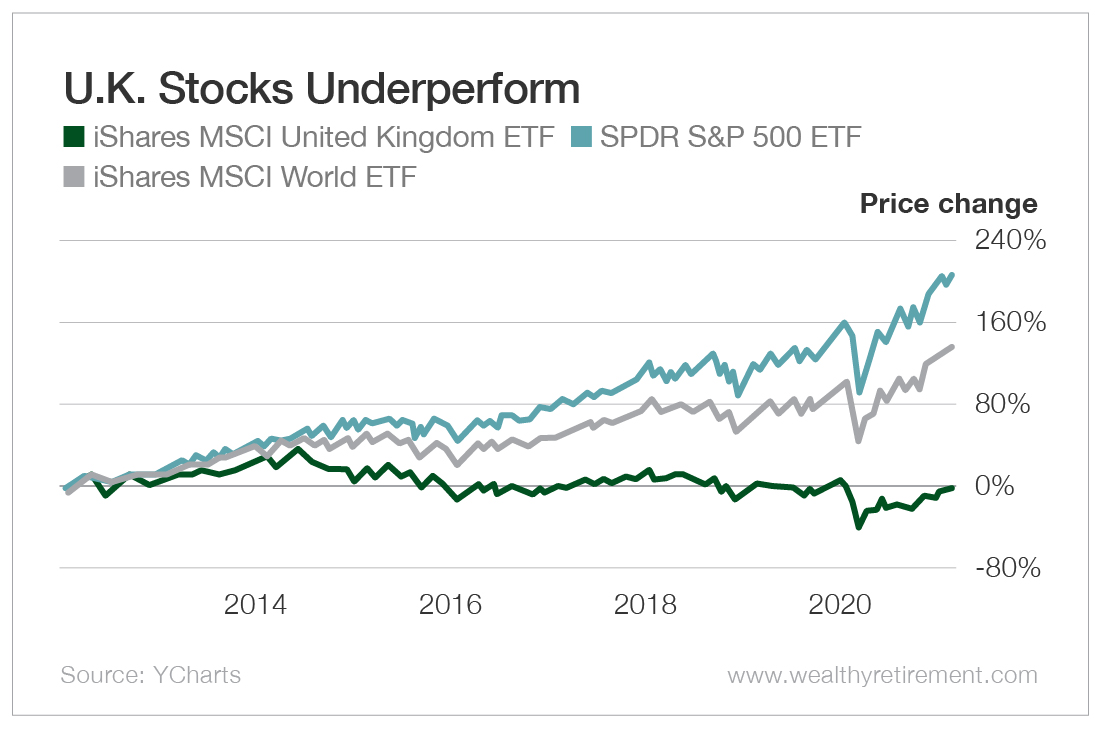 That is almost a full decade of no returns.

A small part of the problem is that the pound sterling has declined against the U.S. dollar from a ratio of 1.56 at the start of 2012 to 1.39 today.

Discount that currency weakening, and the U.K. index is in slightly positive territory for 2021, which is still terrible.

The real problem is that large cap U.K. stocks have barely moved…

I believe that is about to change.

In fact, I believe that U.K. large cap stocks are poised to outperform for what could be an extended time.

Vaccines, Brexit and a Rotation to Value

Just because a group of stocks has performed poorly for a long stretch doesn’t necessarily mean those stocks are a good place for our investment dollars.

When it comes to getting bullish on beaten-down large cap British stocks, we need to answer a question…

What has changed to make these long-underperforming stocks wake up?

First, the U.K. is a clear leader in getting its population vaccinated.

Almost 40% of the population, more than 25 million Britons, have had their first dose of a COVID-19 vaccine already.

That is bullish for getting the U.K. economy growing faster than the rest of the world. Good economic results are going to attract investment dollars.

Second, the wet blanket that has been smothering British stocks for years has finally been removed.

I’m talking, of course, about Brexit, which has created uncertainty about the economic future of the U.K. for years.

Since the Brexit referendum in 2016, Brexit concerns have been bad not just for British stocks but also for the country’s currency.

Much of that uncertainty was finally removed in December.

Britain finalized a historic trade agreement with the European Union after nine long months of negotiations.

With Brexit cleared, a reason to stay away from U.K. stocks has been removed.

Third, the specific type of large cap companies that make up the U.K. stock market are finally coming back into favor.

The U.K. market has missed this entire tech-driven rally.

Big technology companies are something that the U.K. market doesn’t have.

Instead, the MSCI United Kingdom Index has a sector breakdown that looks like this… 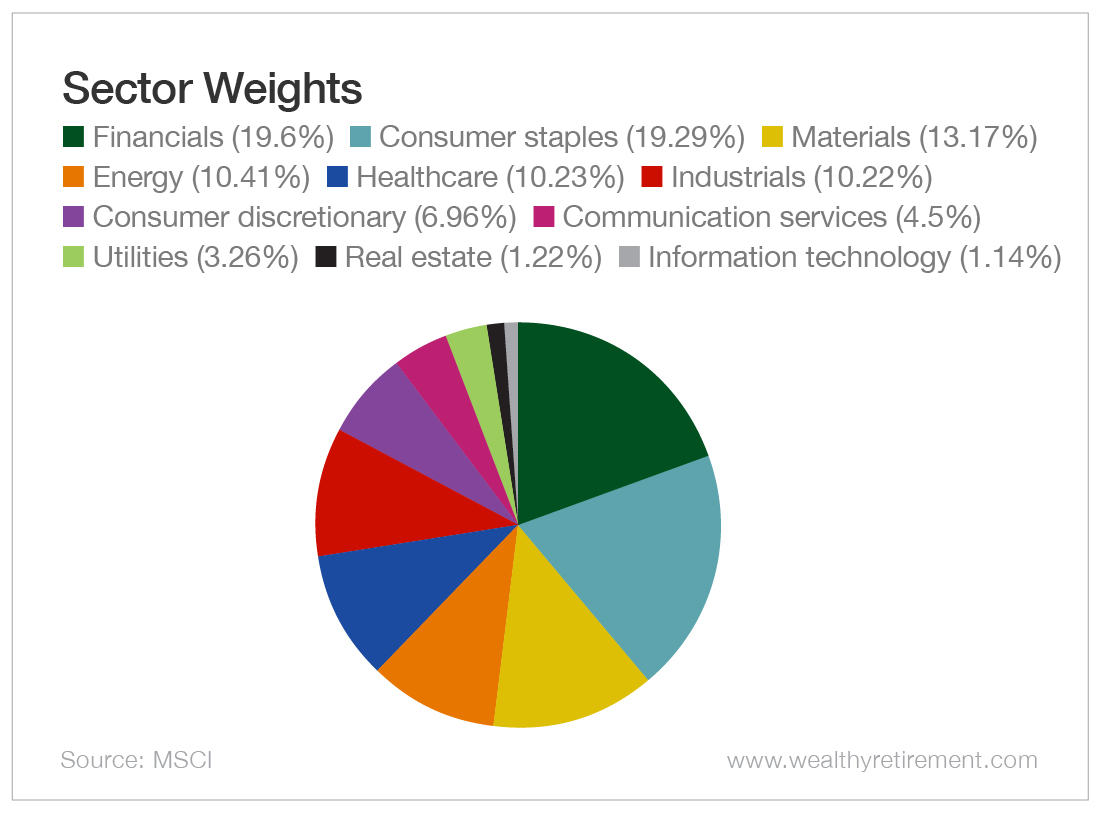 For me, this “tech-light” U.K. sector breakdown is very welcome.

The U.K. is heavily weighted toward value stocks – and its market presents a clear value today.

For perspective, consider that U.K. stocks need to more than double to trade at their normal historical levels relative to their cash flows and book values.

The way to play this opportunity is simple…

The 10 largest holdings are these blue chip names… 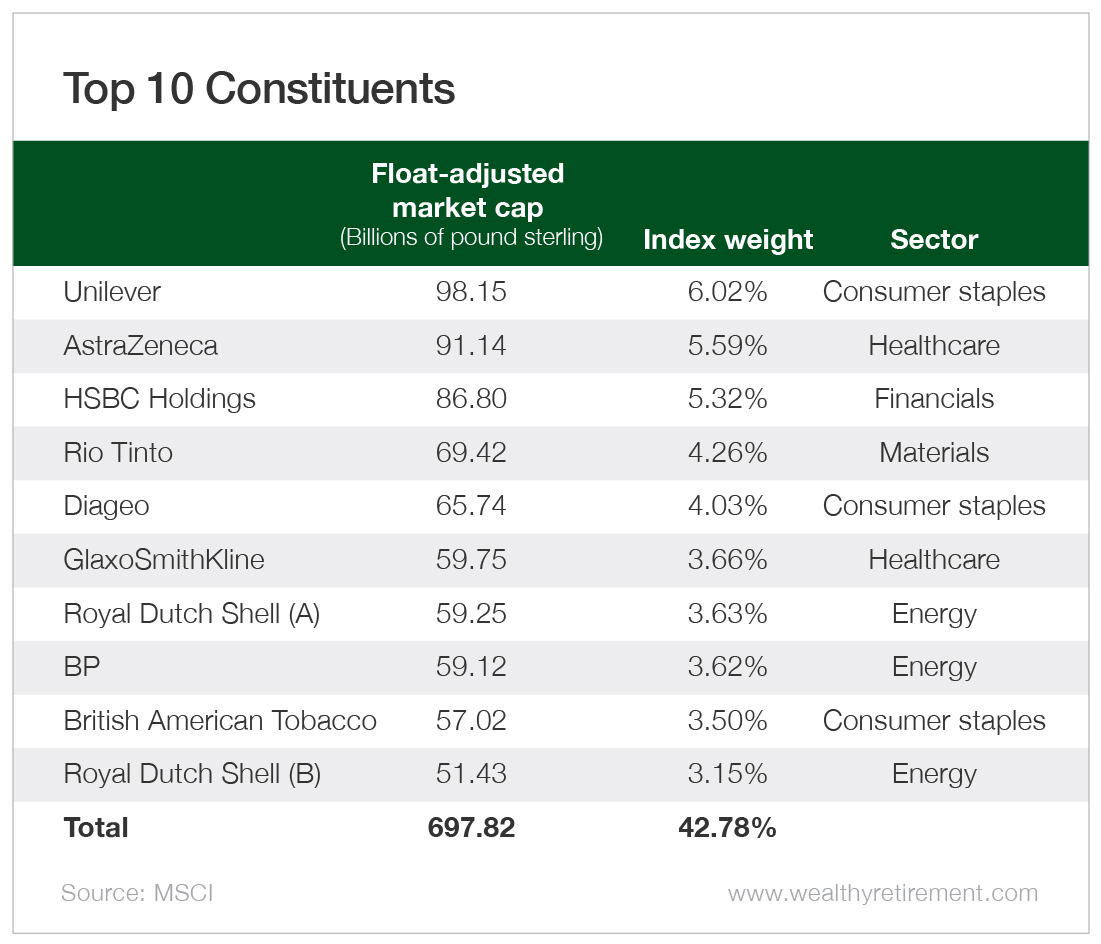 The winding down of the pandemic and the removal of Brexit concerns are going to see money flowing back into U.K. stocks.

The rotation back to value should bring even more interest…

And the cherry on top could be a strengthening British currency.

A contrarian’s special all around!