Making the Most of April’s Rare Buying Opportunity

We had a rare buying opportunity in front of us. I wrote…

In uncertain times, history and experience are invaluable resources.

What both are telling me now is that there has rarely been a better time to buy small cap stocks.

My specific suggestion was to buy a diversified small cap exchange-traded fund (ETF), like the iShares Russell 2000 ETF (NYSE: IWM).

This trade could not have worked out better. 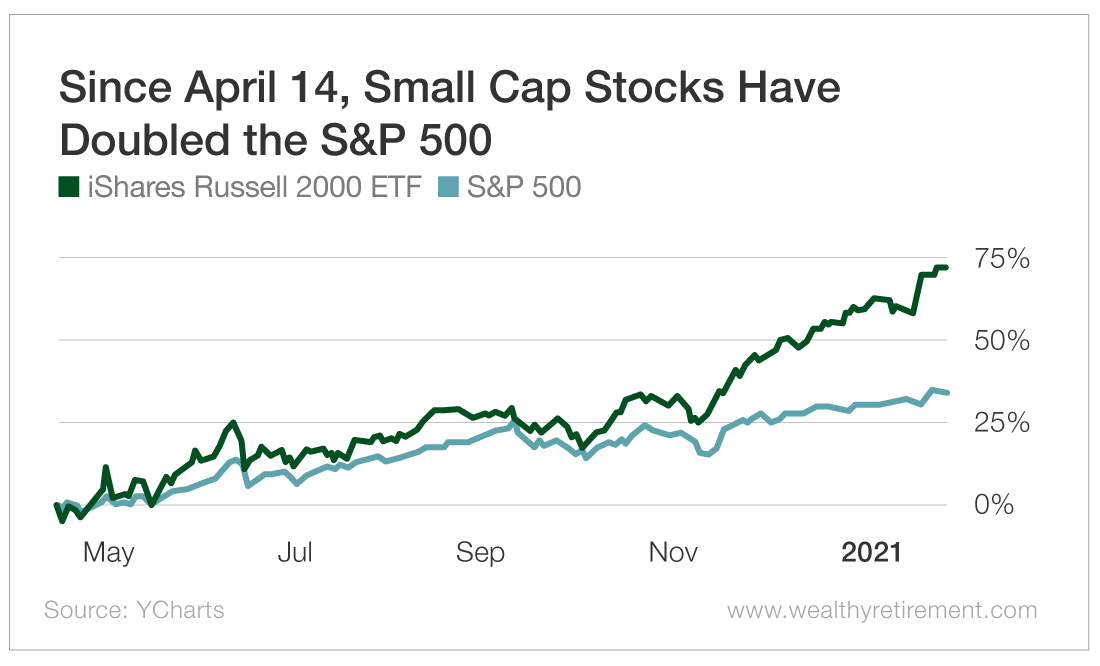 The S&P 500 has had a stunning rally since last spring.

Yet small caps have done even better.

That is more than double the return of the S&P 500.

It isn’t very often you can get a 70% return in less than a year from a diversified ETF that holds 2,000 different stocks…

With the Benefit of Hindsight, This Trade Looks Easy

As investors, it is imperative that we learn from our trades, both good and bad.

The lesson from this successful small cap trade is to trust the data.

On April 14, every historical precedent was screaming at me to buy small caps…

In Heat of the Moment, the Trade Wasn’t Nearly So Easy

The data made it clear that it would pay off big to buy small caps on April 14.

Even so, pulling the trigger on that trade was very difficult.

In April 2020, buying stocks was a scary proposition. The market had just crashed, the economy was collapsing and the fatality rates of COVID-19 were still unclear.

Our human “flight or fight” instinct was telling us to run from trouble and get out of the market.

As per usual, this was the exact time we should have been buying.

The truth is, the best investment opportunities almost always arrive at the scariest moments.

Back in April, looking at the historical data helped me ignore the fear and identify the rare buying opportunity that was in front of us.

I hope you were able to take advantage of it.

Start Spreadin’ the News – Is This 6% Yield Leaving Today?