The bottom of the financial crisis was a terrifying moment. More than a decade later, if I close my eyes, I can still feel it.

This lasted for months. By the first week of March 2009, the mainstream consensus was that another Great Depression was at hand.

Nobody was buying stocks.

With the benefit of hindsight, we now know that the first week in March 2009 was the greatest stock-buying opportunity in a generation.

But what should we have been buying?

Should we have been focusing on stocks with the cheapest valuations?

Or should we have loaded our portfolios with quality and bought great companies trading at good – but not absurdly cheap – valuations?

In March 2009, you could find energy companies down 90% from where they were 12 months prior.

With oil trading for not much more than $30 per barrel, producers were at absurdly low valuations relative to their production and reserves.

It was a value investment opportunity if there ever was one.

The tech sector, meanwhile, loaded with some of the most dominant growth companies on the planet, was certainly down – but not nearly as much as the energy sector.

Instead, the tech sector in March 2009 offered growth at a very reasonable price.

So which should we have been buying? Energy sector deep value or tech sector growth at a very reasonable price?

Consider the chart below… 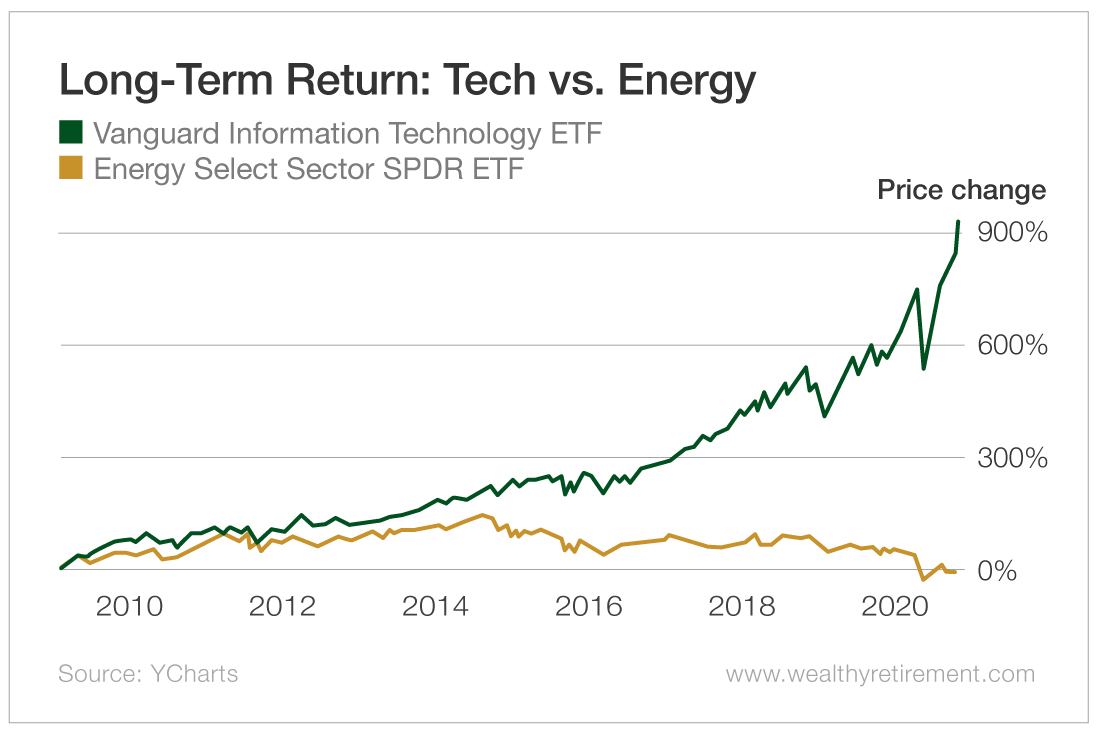 Meanwhile, the Energy Select Sector SPDR ETF (NYSE: XLE) is not even up. The sector is actually down 11.21%.

At no point since the March 2009 bottom did the energy sector outperform the tech sector. That is despite the price of oil more than tripling from $30 per barrel in March 2009 to more than $100 per barrel for several years heading into 2014.

One common misconception is that there is a difference between growth and value investing.

Just because a stock is trading cheaply relative to its earnings, cash flow or assets doesn’t mean it actually offers value.

And just because a rapidly growing stock trades at an expensive value relative to its earnings, cash flow or assets doesn’t mean that isn’t a great value.

The truth is that the best investments are companies that are able to grow their value over long periods of time.

A great tech company that trades at 20 times earnings but will grow those earnings at a rate of 20% per year is a much better bargain than an energy company trading at eight times earnings that will never grow.

As investors, we need to be able to identify what makes a company great – and that greatness always boils down to how much free cash flow a business can generate.

The tech and energy sectors provide the perfect context for this.

The value in tech companies comes from their intellectual property. They don’t need to invest huge amounts of money in machines, buildings, etc.

Their businesses spit out cash flow every year that can then be reinvested to grow the business or be distributed to shareholders through dividends and share repurchases.

Energy producers, on the other hand, generate very little (if any) free cash flow. They must always spend their cash on drilling new wells, finding new discoveries and paying for their rigs just to replace declining production.

The reality is that tech companies are far better businesses than energy producers.

Over the long term, it is always worth paying up a little bit for the long-term free cash flow growth that quality companies generate.