A Hard Lesson From a Legendary Hedge Fund Manager

Many of us have.

But investing wisdom doesn’t need to come at a steep cost.

As investors, we can learn through observing the hard lessons learned by others.

Hedge fund manager Stan Druckenmiller is one of the greatest investors of all time.

During one 30-year period, his hedge fund generated an annualized rate of return of 30%.

And the Druckenmiller track record gets even more impressive…

Over that entire 30-year stretch of managing money, he did not have a single down year!

He even got his investors an 11% return during the market collapse of 2008.

But even an investor as good as Druckenmiller makes mistakes… During the late 1990s, the technology sector was on fire.

In the 18 months from August 1998 to February 2000, the tech-heavy Nasdaq index tripled in value.

Druckenmiller sat at his desk and watched the Nasdaq march higher day after day.

Druckenmiller had decided not to participate because he thought that the bull market he was witnessing had gotten way out of hand.

And he was right… Stocks were trading at 100 times earnings and more than 20 times sales.

But by March of 2000, Druckenmiller couldn’t take it anymore. He was tired of watching so many others make so much money so easily.

In Druckenmiller’s words, here’s what happened next:

So like, around March, I could feel it coming. I just – I had to play. I couldn’t help myself. And three times the same week I pick up the phone – don’t do it. Don’t do it.

Anyway, I pick up the phone finally. I think I missed the top by an hour. I bought $6 billion worth of tech stocks, and in six weeks I had left [George] Soros and I had lost $3 billion in that one play.

It was a rare mistake by Druckenmiller – but a big one.

I bring it to your attention today because I think we can all benefit from it.

Druckenmiller knew not to chase outrageously expensive stocks, but he did it anyway.

At the peak of the technology bubble in the spring of 2000, the tech stocks Druckenmiller was buying were incredibly expensive.

With the benefit of hindsight, it’s easy to see that aggressively buying in the spring of 2000 was foolish.

Today, we see a similar situation. We have far too many investors willing to pay foolish prices for many of the most popular stocks in the market.

The chart below shows there are a whopping $4.5 trillion worth of stocks trading at more than 20 times sales today.

That’s even more than the $3.6 trillion worth of stocks that were trading at more than 20 times sales in the spring of 2000, at the peak of the tech bubble. 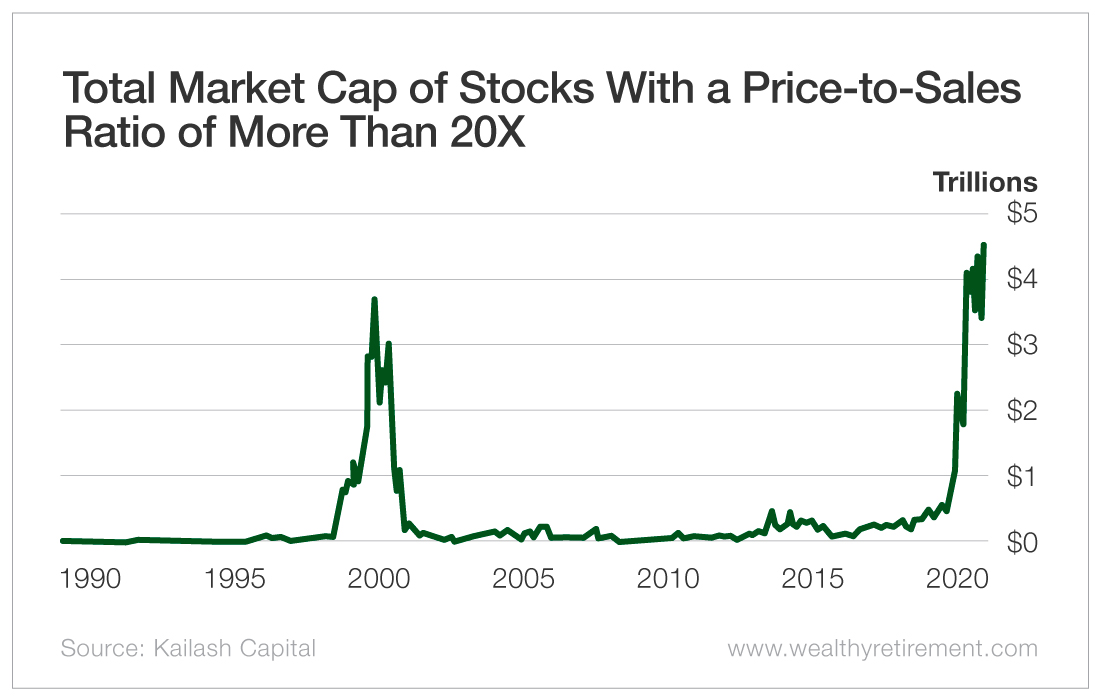 The spikes representing the tech bubble and today’s market are less-than-subtle warning signs.

You don’t want to be chasing these overpriced tech stocks today.

When this many stocks are this expensive, you need to start being very choosy about where and what you’re putting your money into.

Rarely over the past 30 years has the market cap of stocks trading over 20 times sales exceeded $500 billion.

But today that number is at $4.5 trillion – more than nine times as much.

You don’t need to learn a lesson the hard way by chasing these expensive stocks.

Instead, let’s draw on Druckenmiller’s experience from March 2000 and stay disciplined.

There are good stocks to own out there, but the really expensive part of the market is not where to find them.

Why Your Favorite Companies’ Cash Flows May Decline

Why Oil and Gas May Be a Bargain...