The Greatest-Ever Investor Is Making a Huge Mistake

That was the case when I wrote to you about Zoom Video Communications (Nasdaq: ZM) in September 2020.

At that time, the headlines were bullish for Zoom.

The pandemic was still raging, society was working from home and there was no guarantee that a successful vaccine would arrive.

With Zoom trading at $480, the stock sported an insanely optimistic price-to-earnings ratio of 580!

I urged you at the time to sell any Zoom shares that you owned immediately.

That was a wise call. 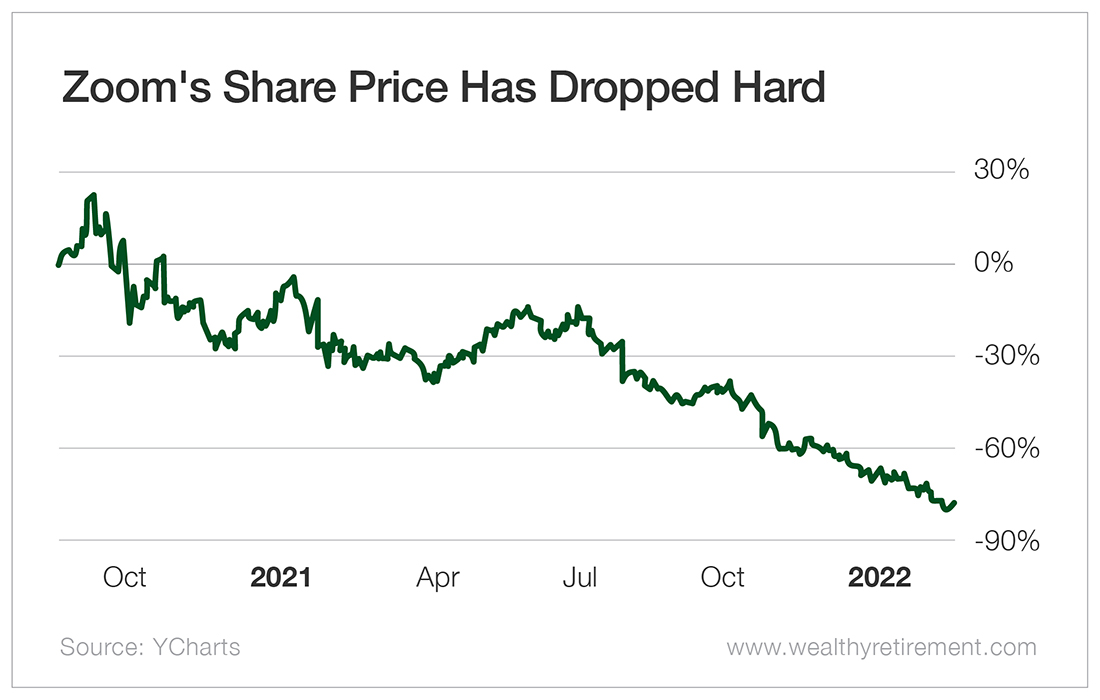 I bring up Zoom’s ongoing descent because I now see a similar scenario playing out in the market – only this time, it pertains to a whole sector.

The news lately has been bullish for oil and shares of oil producers, as the price of crude is surging.

You can see in the chart below that the energy sector has indeed had an impressive run. 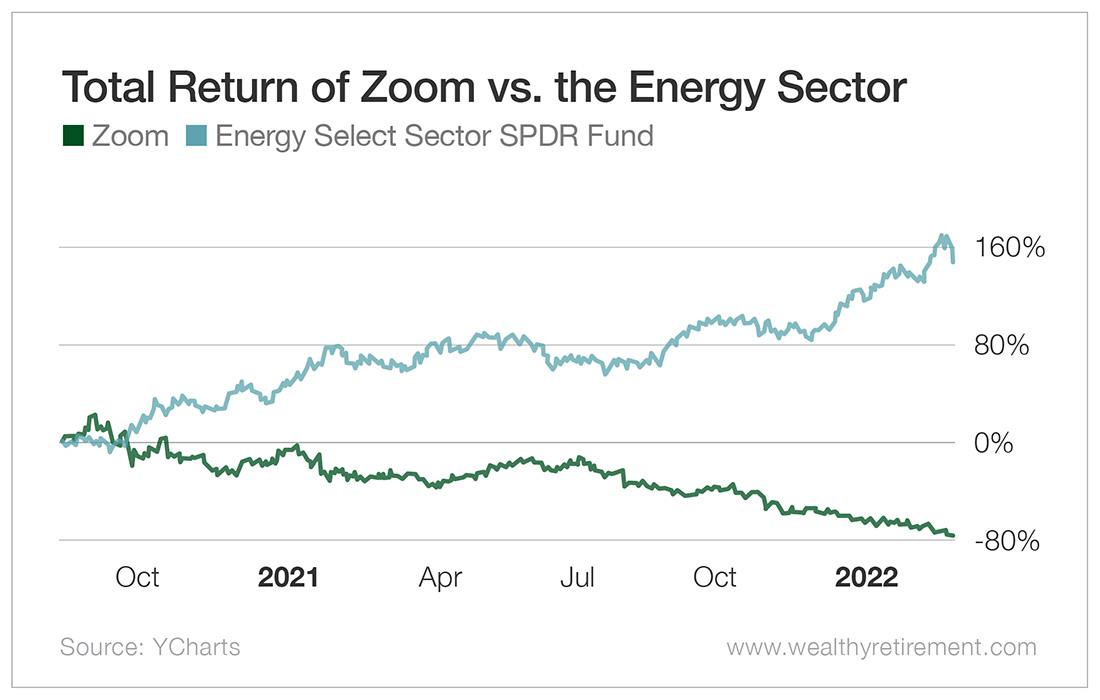 The energy sector has certainly been a much better place to be invested than Zoom!

But we have to remember that I was bullish on oil producers in November 2020, when the news flow for the oil industry was decidedly bearish.

At that time, the future supply and demand fundamentals were starting to look attractive for oil prices.

Now fast-forward in time. Investors who are buying oil producers today are likely paying a high price for the current bullish consensus.

Which is why I’m not so bullish now.

After all, my investment style is contrarian.

I developed it by religiously reading everything I could by Warren Buffett, the greatest stock market investor of them all.

You can imagine my surprise, then, when I find out that Buffett is aggressively buying shares of an oil producer!

The below chart for Occidental Petroleum is not one that you would think would be attracting a great contrarian like Buffett. 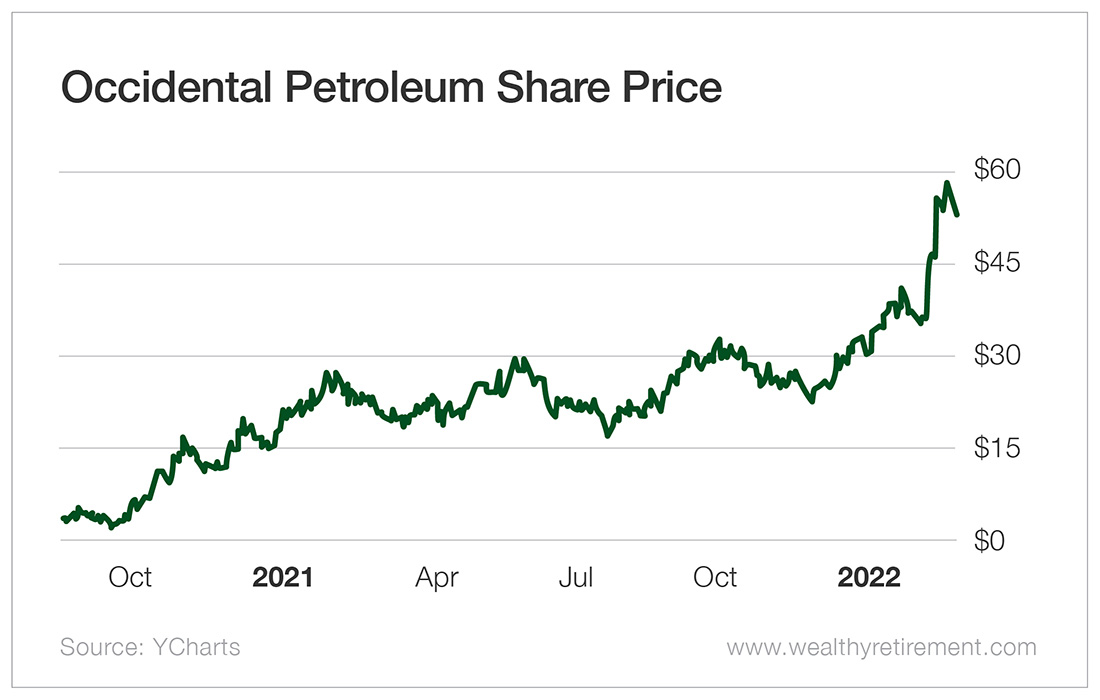 As of his last filing, Buffett now owns 136 million shares of Occidental Petroleum for his conglomerate Berkshire Hathaway.

More than 90 million of those shares have been purchased since March 2, 2022.

That means Buffett is buying shares at nearly double the price he could have paid just a couple of months ago.

He could very well still be buying shares and adding to his $6.9 billion position as I write.

Buffett’s buying has been so aggressive that he has pushed Occidental Petroleum’s share price up on his own.

Occidental Petroleum’s share price is up 30% in March alone since Buffett began buying.

This is all highly unusual of Buffett. It’s especially rare for him to be buying so aggressively in full view of the public.

Normally, when he is interested in taking a big position in a company, he does it quietly and steadily over time.

Not loudly and all at once.

Buffett built Berkshire’s huge position in Apple (Nasdaq: AAPL) over a two-year period from 2016 to 2018.

He has built this Occidental Petroleum position in a few days.

These Occidental Petroleum purchases have been in full view of the investing public.

There has been some speculation that Buffett is interested in buying all of Occidental Petroleum like he did with Burlington Northern Santa Fe Corp. more than a decade ago.

He has definitely warmed to capital-intensive businesses like this over the past couple of decades by buying Burlington Northern (a railroad) and MidAmerican Energy (a utility).

But I’m worried Buffett’s timing is off again on this aggressive purchase.

He has recently made some obvious mistakes, selling his airline stocks during the COVID-19 low and dumping Wells Fargo (NYSE: WFC) around the same time.

It felt weird when I was pounding the table on Wells Fargo as my hero was selling.

I disagree with him again today.

Now is not the time to be aggressively buying oil producers.

Plus, I think there are other great opportunities out there that the tough stock market of 2022 has opened up for us.

When you next hear from me, I’ll show you a few.

Why This “Dividend Guy” Relies on Bonds

The “Great Rotation” Is Coming: Here’s How to...