Year to date, the energy sector has taken a beating.

The Energy Select Sector SPDR ETF (NYSE: XLE), an exchange-traded fund (ETF) that tracks U.S. energy producers, is down almost 40% so far in 2020.

That is bad, but it has been worse. Through March 23, the Energy Select Sector SDPR ETF was down 60% on the year.

Remember, that wasn’t one stock that lost 60% of its value… that was the entire diversified sector. 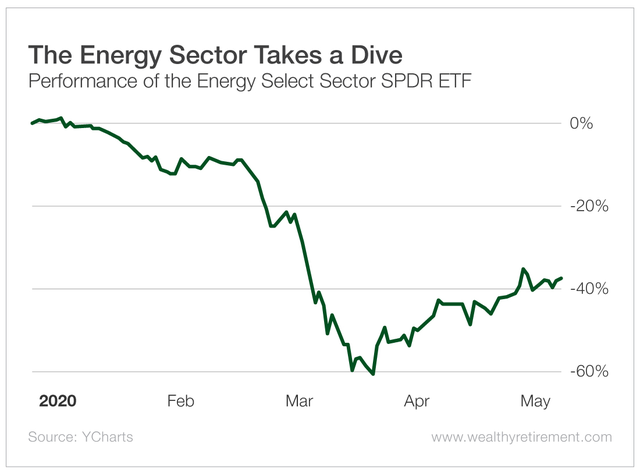 I imagine none of this surprises you.

With economies across the world slamming to a halt, oil demand has plummeted like never before. Planes aren’t flying, cars aren’t driving and oil isn’t being consumed.

As a result, oil prices have crashed.

Yet among all of this carnage, one segment of American oil and gas producers has actually seen share prices rise in 2020.

Even more surprisingly, that group of stocks is among the best-performing groups in the entire market…

The Energy Select Sector SPDR ETF is made up of American oil and gas producers.

Yet while they roll off the tongue very smoothly together, “oil and gas” are actually two completely different commodities.

Natural gas, on the other hand, is used primarily to create electric power, heat or cool your home, and power commercial enterprise.

The mix of oil and natural gas that is generated by American producers varies greatly from company to company.

In 2020, the companies that produce almost exclusively natural gas have had surprisingly strong stock price performance.

In the chart below, I’ve pulled out four of the pure-play American natural gas producers and compared their 2020 share price performance with that of the Energy Select Sector SPDR ETF.

This group has outperformed the sector by a wide margin… 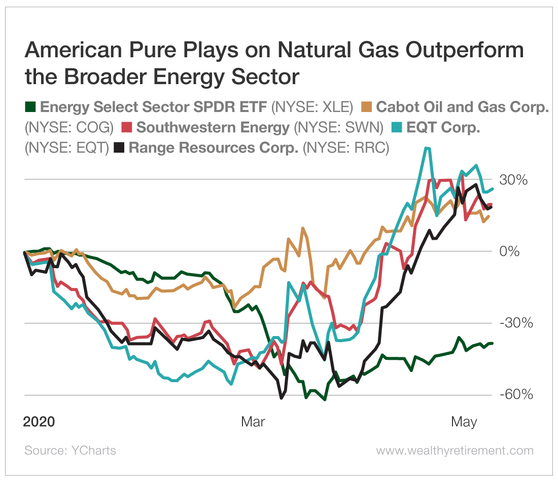 While the Energy Select Sector SPDR ETF is down almost 40% to date, the share prices of this group of natural gas producers are all up by double digits.

That must mean that natural gas prices are up… right?

The Market Is Always a Forward-Looking Mechanism

Natural gas producers’ share prices are up on the year, but natural gas prices are actually down, still languishing at less than $2 per million cubic feet.

That is not a highly profitable price for these producers. 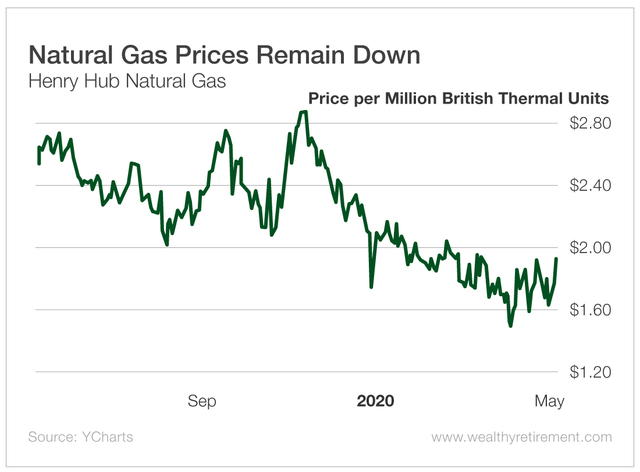 It all comes down to a bullish long-term outlook.

You see, investors are looking at what shale oil producers in the Permian Basin in Texas are doing. These producers are slashing spending budgets, dropping rigs and lowering future production estimates.

The obvious question… Why is slashing drilling bullish for natural gas stocks?

Permian shale oil producers also produce a lot of natural gas. In the industry, natural gas that comes out of the ground alongside oil is called “associated gas production.”

The Permian shale drillers are primarily interested in oil, but the amount of natural gas that comes out of those wells is significant too.

The base decline rate of Permian shale production is estimated to be more than 50%. That is true of both the oil and associated gas being produced.

Analysts estimate that associated gas production in North America could decline by more than 10 billion cubic feet by the end of 2021. (This estimate includes the impact in the Permian and elsewhere in the United States and Canada.)

Ten billion cubic feet equates to roughly 10% of total North American natural gas production. That is the amount of production forecasters see disappearing over the next year.

It is always good when someone does the hard work for you.

Despite the decline in associated gas production, I am not bullish on natural gas producers. The stocks have already had a run, and these companies are producing a commodity facing its own demand issues.

What I do like is how this successful run-up in share prices for natural gas producers once again shows the cyclical nature of the energy sector.

In this sector, what is bad for one segment of the sector often opens opportunities for another.

That is why, for the informed investor, the energy sector is always one to stay on top of. The next profitable trade is never far away.